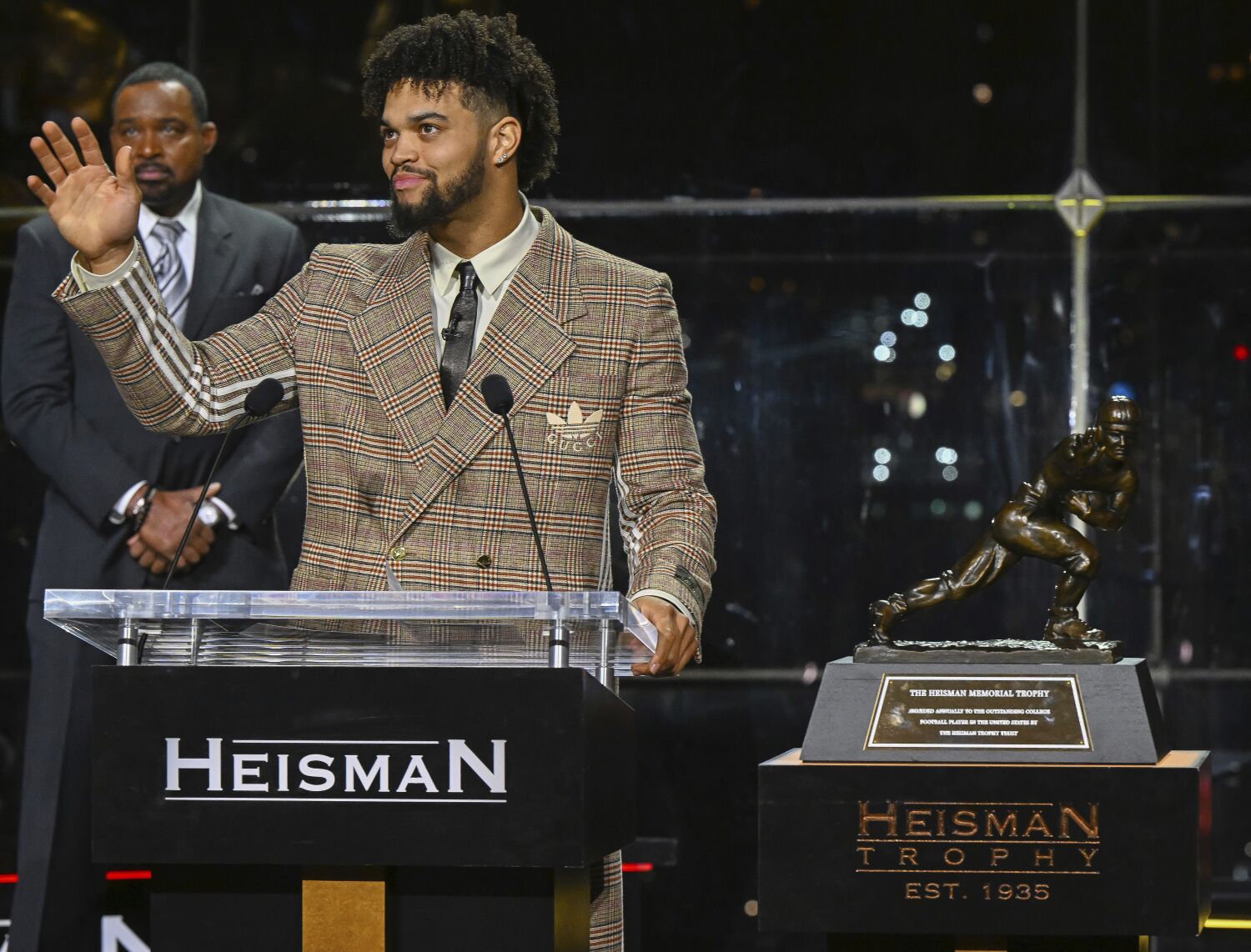 “F—Utah” a week later before the Pac-12 championship game was further evidence of the athlete’s selfish disregard for sportsmanship, integrity and accountability, and that his school and head coach turned a blind eye to his derogatory messages. After all, only victory counts.

The Heisman Trophy is reportedly awarded to a player who “demonstrates the pursuit of excellence with integrity.” The phrase “with integrity” should no longer be included in the selection criteria.

I was stunned by Ryan Kartje’s drooling adoration of Caleb Williams. Williams is arguably the best candidate for the Heisman Trophy, but canonizing him that way is another story. Caleb is talented, but he has some weaknesses. Williams could certainly use a sip of wine of humility and chivalry before painting his fingernails, and Kartje might prefer to write as a sportswriter rather than an apologist.

Enough Heisman Committee and USC. Restore Reggie Bush’s records and the Heisman trophy. Now that collegiate athletics is being subjected to the will of capitalism, it’s time to give Reggie’s Heisman back to him and Heritage Hall. As well as his jersey in the Colosseum. What exactly was he banned for? A house for his parents? Give me a break NCAA!

It is unfair to rank the USC Heisman Trophy winners as each player had their own special winning season. If anything, Caleb Williams’ exploits were the most notable as he had to score on most possessions just to stay ahead of a weak defense that allowed points.

Marcus Allen is my favorite Trojan of all time and agree it should be at the top of the USC Heisman list. But no one should question whether OJ Simpson deserves to be a part of the Heisman conversation because of his choices and actions later in life. He should always be recognized for the amazing college football player that he was at USC. May his life serve as a warning to young athletes as they climb the ranks of fame, to be careful that their awards and pride do not become a claim that leads to life-changing decisions.

Do LeBron James and Russell Westbrook have terms in their contracts that give them the right to fire low-percentage three-point shots at pivotal moments in the fourth quarter and overtime? It’s crazy to see them blast the Lakers out of games after their great play fueled comebacks from double-digit deficits. Can you please let someone else try to be the hero?

While the Dodgers stock up on injured former All-Stars, the other teams in NL West are signing real ballers. Player contracts are out of control, but who better placed to spend than the Dodgers with their big attendance, high ticket prices, record cable deals and $20 beer? If we start the season with Gavin Lux at shortstop and Max Muncy at second base, they’re not going to get any of that fan’s money.

It sure looks like the Dodgers have simply ceded the West to the San Diego Padres next season. The Padres sign Xander Bogaerts, a true All-Star, and the Dodgers sign Noah Syndergaard, an average starting pitcher at best. The Padres are loaded with simply the best lineup in baseball along with a very capable pitching staff, while the Dodgers have done nothing to improve their roster. It sure looks like they’ll just throw away the upcoming season and wait for next year’s Ohtani Sweepstakes.

Just as the Dodgers tarnished their franchise’s reputation by signing Trevor Bauer, the Giants have tarnished their own legacy by overpaying unrepentant con man Carlos Correa. With this signing, the rivalry between the two teams will no doubt be elevated to an unprecedented level of disdain and no doubt fan violence.

University sport is really no longer university sport. It’s a professional sport for college-age athletes. The conference, formerly known as the Big Ten, will have 16 teams once USC and UCLA fly in. And extend from New Jersey to our state of California.

What we have now are junior pro teams no longer linked by geography but addressed by income potential and by college names to keep alumni and local residents interested. To remember if your “home team”, recruited from all states of the Union, plays in Maryland or Rutgers.

Yes, the UC Regents cleared the way for UCLA athletics to move into the Big Ten, but not without inflicting major blackmail on the Bruins. With a committee recommendation that UCLA pay UC Berkeley between $2 million and $5 million a year for reasons that made no sense, the Regents met privately and increased the extortion to a cap of $10 million a year. So essentially, UCLA will be subsidizing the inefficiency of UC Berkeley’s athletic department. Fabulous!

The Times Sports Department has been grossly inadequate in its coverage of the NCAA women’s volleyball tournament for the past two weeks. Not even a mention of the teams that win and make the Final Four. Was it the lack of performance from the big-name LA teams?

This sport is one of the most popular and exciting today and is watched by a growing audience every year, but is not mentioned at all by The Times.

Thank you for continuing to cover articles about the UCLA women’s basketball team. The team and the coaching staff definitely deserve it.

What about the fans, Clippers?

I’m a longtime Clipper season ticket holder who was unlucky enough to attend the game against the Suns last night. The Clippers’ decision to “rest” almost their entire starting lineup in the game to “rate roleplayers” was a disgrace and an affront to all the people who paid large amounts of money to see an NBA game they were expecting play the best healthy players.

While there may be justification for intermittently resting a player or two and allowing the team a chance to assess other players, the Clippers resting virtually all of their best players made the game resemble nothing more than a glorified scrum from the start and not be competitive. This is inexcusable. Many of the fans left early. The Clippers should reimburse all fans for the ticket cost of this fiasco and the league should fine the team hefty to ensure it doesn’t happen again.

https://www.latimes.com/sports/story/2022-12-17/reader-letters-caleb-williams-dodgers Letters to Sports: Why all the love for Caleb Williams?

Kayleb Wagner broke Derrick Henry’s rushing record. Can he get an FBS scholarship?