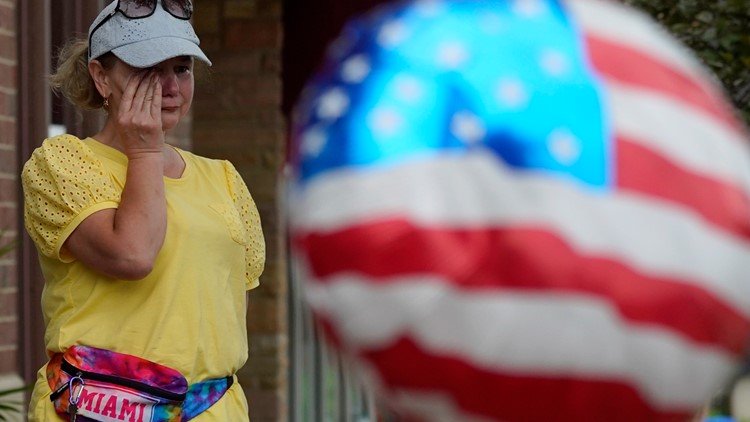 Two people have been identified so far: a caring grandfather and a woman who is remembered for her warmth and kindness.

HIGHLAND PARK, Illinois — Police say six people were killed and at least 30 injured when a gunman opened fire on a crowd of parade-goers in a suburb of Chicago on July 4.

Officials did not release the names of the victims as of Tuesday morning, but relatives came forward.

Five people who died in the parade were adults, officials said. They had no information about a sixth person who later died in a hospital. The injured were between 8 and 85 years old, according to hospitals – most with gunshot wounds.

RELATED: Who is the person of interest in the 4th of July parade at Highland Park?

Nicolas Toledo, a loving grandfather in his 70s, was killed in the shooting, family members have confirmed to several news outlets.

Family members told The New York Times that Toledo didn’t want to go to the parade, but went anyway because his family didn’t want to leave him alone. He was sitting in a wheelchair between his son and a nephew before the shots were fired.

“He was so happy,” Toledo’s granddaughter Xochil told the Chicago Sun-Times. “Happy to live in the moment.”

She said when the shots rang out, three bullets hit Toledo: “He was the one who saved all our lives. It would have gone to me, my boyfriend or my cousins.” Her father was shot in the arm while trying to protect Toledo and her boyfriend was shot in the back.

A GoFundMe campaign described Toledo as “a father to 8 and a grandfather to many.” Family members told the New York Times that he has dual citizenship of the United States and Mexico and has traveled between the countries his entire life. The family urged him months ago to come to Highland Park so they could spend more time with him.

The GoFundMe campaign had raised more than seven times its original goal of $5,000 as of Tuesday morning.

A nearby synagogue said Jacki Sundheim, a life member, was shot dead at the parade.

“Jacki’s work, kindness and warmth have touched all of us, from her early days as a teacher at Gates of Learning Preschool to how she has guided countless of us through the moments of the joys and sorrows of life – all this tireless devotion,” said the North Shore Congregation Israel in a statement.

The synagogue said Sundheim was a lifelong parishioner and a beloved associate for decades.

This story will be updated as we learn more.