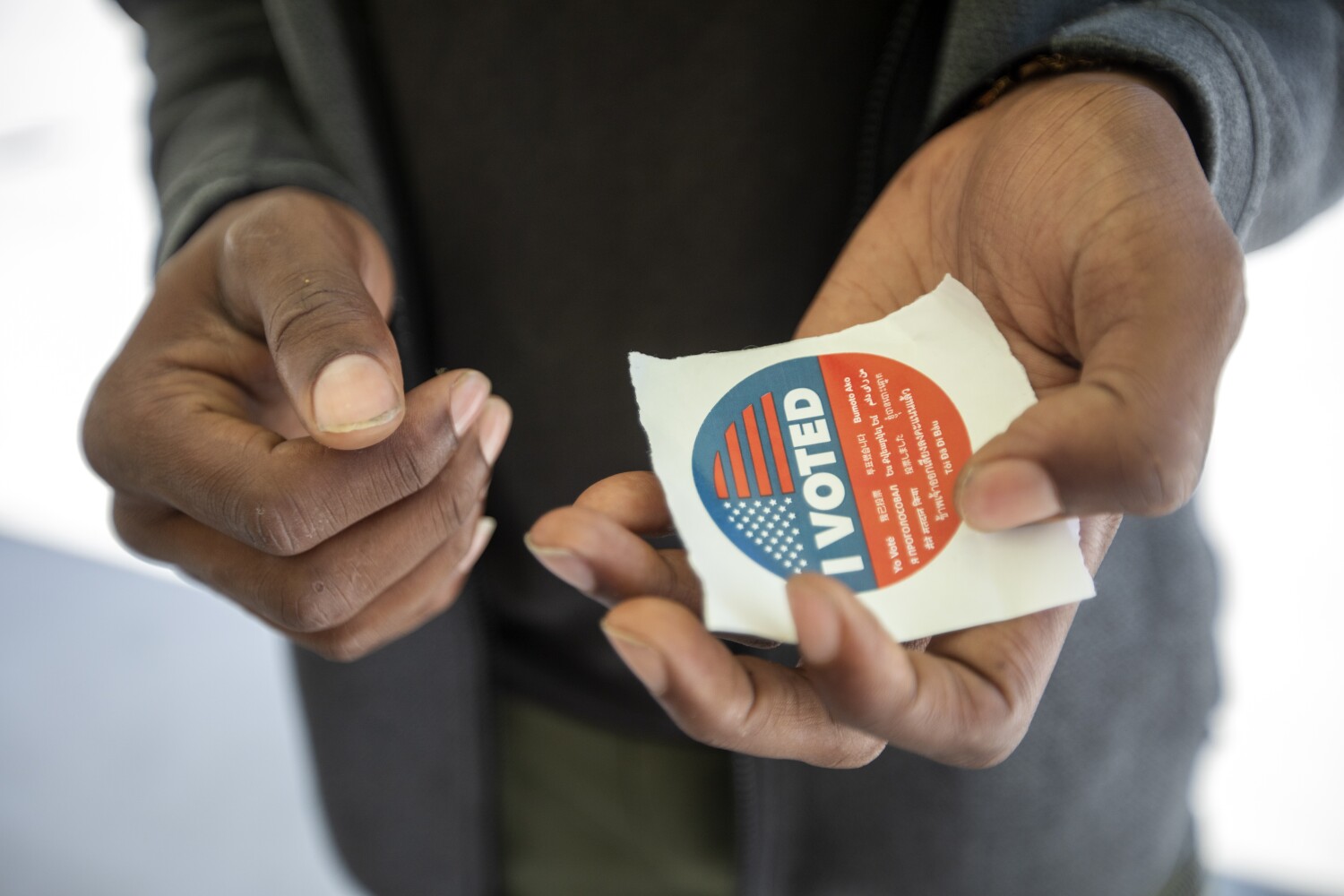 The sprawling city of Los Angeles, with its 4 million people and 500 square miles, is shrinking at election time.

Votes are still being counted in Tuesday’s primary, but to no one’s surprise, the vast majority of voters rejected running for LA mayor, council seats and various county, state and congressional elections. Nationwide, the numbers were about the same according to the first signs. Not historically low, but nothing to cheer about.

So why does this keep happening even though voting is becoming easier than ordering a pizza, and even when simmering issues like homelessness are driving demand for solutions?

“Unfortunately, I didn’t attend,” a young man named Jeremy told me as his shift ended at a COVID-19 testing site at Eagle Rock Rec Center.

At least he knew who was running for mayor, which cannot be said of all the people I interviewed in the days leading up to the election.

“I would have voted for Karen Bass,” Jeremy said, and he told me he probably would in the general election. “But I had a lot of commitments and some personal things.”

Across the recreation center, 31-year-old Andy Perez, a breakdance instructor, told me he hadn’t voted in years and had no intention of changing.

“Honestly, it hinders my day-to-day activities,” Perez complained, saying that his mother works at home as a scheduler and is constantly interrupted by political robocalls.

These calls are irritating, I agree, but this answer just doesn’t work for me. Perez offered another explanation that was slightly better. He said his candidates at his last election “didn’t deliver on what I’ve heard they promised”.

As I said in a column last week, when I rebuked the no-show, the reality of open laziness cannot be dismissed as a factor. But there is more to it than that.

Empty promises and failed policies have convinced many that a vote doesn’t matter.

“We didn’t see the results that we expected,” said Kevin Wharton Price of Leimert Park.

He told me before the election that he was considering his options, but wasn’t convinced that the frontrunners for mayor, Rick Caruso or Karen Bass, had an agenda that would make things better for struggling people of color.

When I called Price after Election Day, he said he didn’t vote. But he will do so in November’s general election, he said, if one of the candidates can convince him – and his community group Africa Town Coalition – that they aren’t just dishing out a lot of campaign rhetoric.

“They have to come up with serious guidelines and show what they’re going to do at the grassroots level,” Price said. He’s looking for something definitive and compelling for a strategy to address homelessness “without being aggressive or overbearing,” he added.

Mindy Romero, founder of USC’s Center for Inclusive Democracy, said that primary election turnout — particularly in the presidential election years — has been low for decades, in part because they’re like runoff warm-ups. But the highest turnout is often among older, whiter, and sometimes more conservative voters, so general election ballots skew demographic realities.

“Overwhelmingly, stories about turnout blame the voter for apathy in one way or another,” Romero said, but when she examines why people skip elections, some of the reasons are as rational as the explanations for why people vote.

When I told her about Price, the resident of Leimert Park, she said it didn’t sound like apathy. He obviously cares about his community, she said. But he thinks he’s getting lip service from candidates. And politicians, of course, oversee bureaucracies that are inefficient and unresponsive, further eroding trust in government.

“It’s a political system that doesn’t work for people, and some people vote anyway,” Romero said. “But even they struggle with the feeling that it doesn’t make a difference.”

It doesn’t help in California or anywhere else that newspapers and reporting agencies are gone, politicians are less accountable, and the public is less informed. And a long vote like this month’s requires a research investment that some professionals do not prioritize. Even a regular voter like me is overwhelmed by long lists of candidates for judicial office.

So what can we do about all of this?

Well, if politicians keep their promises, that would be a good start in the fight against cynicism.

Romero said we need a wealth of civic education by schools, candidates and social organizations to make it clearer why engagement is a foundation of democracy.

Why not essay contests at high schools and community colleges about the benefits of voting with scholarships for the winners?

Caruso seems to have a few bucks to spare and loves running TV and social media ads. So why not make a public statement about the long and sometimes bloody history of the struggle for the right to vote in the United States and around the world?

Dwayne Gathers, a government and business affairs strategist in Hancock Park, was so dismayed by the low turnout in recent years that he started a podcast on civitasla.com to chat with a variety of ordinary people and some officials about local affairs chat.

“People need to see others as themselves, involved in creating, building and serving the community,” Gathers said. “And when that participation starts and grows, it shows the importance of voting.”

Romero said another way to encourage engagement is to talk to those who vote, rather than talking about those who don’t.

At the Eagle Rock Rec Center, Dan Hawkins was preparing to referee a baseball game and told me he voted for Caruso because he wanted to do something about homelessness.

“If we don’t vote,” Hawkins said, “what happens to society?”

When Jeremy told me he was too busy to vote but preferred bass, I asked why. He pointed to his colleague, 24-year-old Rodolfo Oliveros, and I gave chase before he drove away. Oliveros told me his policies are more in line with Bass’s and that he was suspicious of Caruso’s move from longtime Republican to Democrat.

Oliveros said he got into politics while at UC Davis, where he was a Transformative Justice in Education fellow. He said he not only worked on COVID testing, but also started a nonprofit in the San Fernando Valley called A Better Tomorrow and told me to raise awareness of the election, “I’m on Instagram, always posting and blowing it up .”

Oliveros said he understands the cynicism but “I think you have to believe in it. … If you vote, chances are there will be some momentum to get the right people in and the wrong people out.”

Maybe one of the hundreds of philanthropists in LA could sponsor a community group and hire people like Oliveros to spread the word. And when that happens, I’d like to appoint another young ambassador to the cause.

Many years ago I met a Fairfax High student named Miriham Antonio, who lived in a Koreatown apartment shared by two families. She had two brothers and a mother who worked the night shift as a janitor. One day I rode the bus to school with Antonio, who had dreams of going to a good college and going to law school, and in Fairfax she was running a voter registration campaign.

Antonio, now 25, just graduated from USC and was accepted into UC Irvine Law School. She worries a little about paying the bills and does housekeeping with her mother, having worked for a school board member, a gubernatorial candidate, and a city councilman for the past several years.

Like Oliveros, Antonio said she understands why so many young people feel cynical or disillusioned. But yes, she said, of course she voted.

“I mean, my whole thing is that it comes down to holding people accountable,” she said. “I think as long as people don’t realize that we need to hold politicians and bureaucracies accountable, nothing will change.”

https://www.latimes.com/california/story/2022-06-11/lopez-column-why-the-majority-of-people-dont-vote-and-what-to-do-about-it Lopez: Why most people don’t vote, and what to do about it

The 2022 War on the Rocks Summer Fiction Reading List