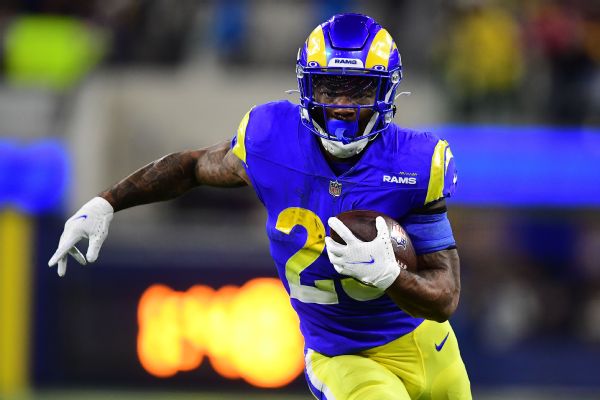 LOS ANGELES — A day after Cam Akers played just 12 snaps in the Los Angeles Rams’ season-opening loss to the Buffalo Bills, coach Sean McVay said his running back needed to “maximize his.” [opportunities] when he gets it.”

“No matter who you’re talking about, you want to see the guys do the little things right, compete with and without the ball,” McVay said. “There have been a few instances where there have been some positive things and some things he can do better, but we just want an increased level of urgency and accountability to snap and snap out of him.”

McVay said he knows what Akers is “capable of” and that’s why he’s confident Akers will be “the guy that we all saw at the right moment as this season continues to progress.”

“We’ve all seen how talented and what a special player this guy can be,” said McVay. “And I want to see him reach his highest potential. And that’s really all there is to it. It’s about nothing but him and Darrell [Henderson] play at a high level, I feel really good when these two guys come back for us.

“And the opportunities were minimal. There were some things that I felt we could do better together in each of these individual games, starting with me, then with the players around him, but also with Cam. And so it’s more of a reflection of confidence that I know what he can be and I’m confident he’ll be the guy that we all saw at the right moment as this season continues to progress him.”

McVay was also asked about wide receiver Allen Robinson, who had a 12-yard catch against Buffalo but was only targeted twice.

“[Buffalo] did a great job,” McVay said. “We must try to involve Allen more. But there were a few opportunities for him to come to life that didn’t materialize for many different reasons. But these are things that we will be looking at week by week.”

Fish out of water? Brian Kelly rocks the college football boat at LSU

Lakers struggle again with shooting, offense in loss to Cavaliers