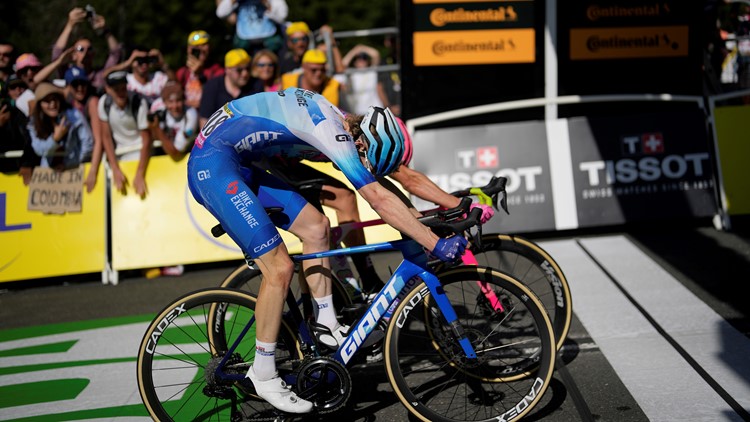 Magnus Cort Nielsen won in a photo finish, winning stage 10 of the Tour de France at the end of a hilly hike in the Alps interrupted by protesters.

MEGEVE, France (AP) — Magnus Cort Nielsen won a two-man sprint in a photo finish to win stage 10 of the Tour de France on Tuesday at the end of a hilly hike in the Alps interrupted by protesters.

It was Cort Nielsen’s second stage win in cycling’s greatest race after his first success in the medieval city of Carcassonne four years ago.

The Dane passed Nick Schultz by a few inches to the line at the end of the long and arduous climb to the Megève ski resort after Luis Leon Sanchez, who finished third, started the sprint.

Cort Nielsen fell on his back exhausted as he crossed the finish line.

“I can’t believe what happened today, I was at the limit on this climb for so long,” he said. “I lost contact with the group a few times in the last kilometers.

Two-time defending champion Tadej Pogacar rode in a group of general contenders who were less than nine minutes behind and retained the lead in the race.

It looked like Pogacar would give up his yellow jersey as Lennard Kämna had bought enough time to dream of the famous tunic at some point in the day’s breakaway. But the chasing group of favorites drove hard in the final and the Slovenian champions kept their lead.

Pogacar now leads 11 seconds ahead of Kämna ahead of two daunting high mountain stages. Kämna is not expected to remain competitive in the thin air and Denmark’s Jonas Vingegaard remains Pogacar’s most dangerous rival, 39 seconds off the pace.

“It all worked out in the end and I’m still happy to be in the yellow jersey,” said Pogacar, who has been in dominant form since the start of the race.

But with the coronavirus wreaking havoc on his UAE-Emirates team, the Slovenian rider has already lost two valuable team-mates who were expected to help him through the mountains. George Bennett was forced out before Stage 10 after testing positive for coronavirus, just days after Vegard Stake Laengen also tested positive and withdrew.

Officials from the UAE Emirates team later announced that Rafal Majka also tested positive for the virus but was allowed to compete in the race by the International Cycling Union (UCI) medical team.

“If you get a positive (case) in your own bubble, that’s just worrying stress and I hope we’ll survive to the end,” Pogacar said.

Tuesday’s stage was briefly neutralized with 35 kilometers remaining after a group of seven climate change protesters sat in the street and lit flares, forcing riders to stop for 12 minutes. Alberto Bettiol was in the lead at that point, but was unable to stay in the lead for long after the race resumed.

On a very hot day, riders made the most of the break to freshen up by pouring water over their necks and heads.

Man United boss Erik ten Hag can take positives from preseason tour, but real work is yet to start