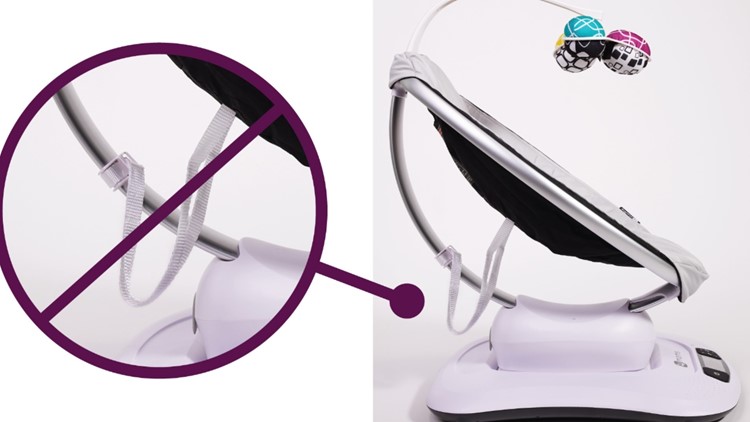 A recall notice said the products were sold at BuyBuy Baby, Target stores and Amazon.

PITTSBURGH — More than two million baby swings and 220,000 baby bouncers are being recalled after reports one baby died and another was injured after becoming entangled in suspension belts.

Pittsburgh-based company 4moms is recalling about two million MamaRoo swings and 220,000 RockaRoo swings in the United States, the Consumer Product Safety Commission said Monday. Another 70,000 of the products are being recalled in Canada.

The recall notice states that the tether straps on the swing and seesaw may hang down when not in use. Young children who crawl under the seat can then become entangled in the straps and possibly be strangled.

4moms received two reports of infants becoming entangled in the suspension harness under the MamaRoo baby swing. One, a 10 month old, died from asphyxiation. Another 10-month-old “suffered bruises on his neck before being rescued by a caregiver,” the recall said. No injuries or deaths were reported by the rocker.

According to the recall notice, the swings and swings sold for between $160 and $250 in BuyBuy Baby and Target stores nationwide from January 2010 through August 2022. They were also sold online at 4moms.com and Amazon.

Which products are being recalled?

The MamaRoo is a baby swing with different movements, speeds and sounds controlled by buttons on the base.

The MamaRoo model with 5-point harness (model 1046) will not be recalled.

The model numbers are located on the underside of the swings.

The RockaRoo is a “front to back” sliding baby bouncer controlled by a knob and power button on the base. The model number 4M-012 is located on the underside of the rocker.

What should I do if I have this product?

According to the recall notice, customers with crawling children should immediately stop using the recalled swings and seesaws and place them out of reach.

Customers can contact 4moms “right away” for a free strap clasp, which the company says will prevent straps from sagging.

The recall notice said customers can call Email 4moms toll-free at 877-870-7390 8 a.m. to 5 p.m. Eastern Monday through Friday safetyandrecall@4moms.com or online at https://www.4momsrecall.expertinquiry.com.

The company said it is contacting all known buyers.

Android 13 is rolling out to Pixel phones today

San Francisco’s Misfit Cabaret: The lovers, the dreamers, the misfits