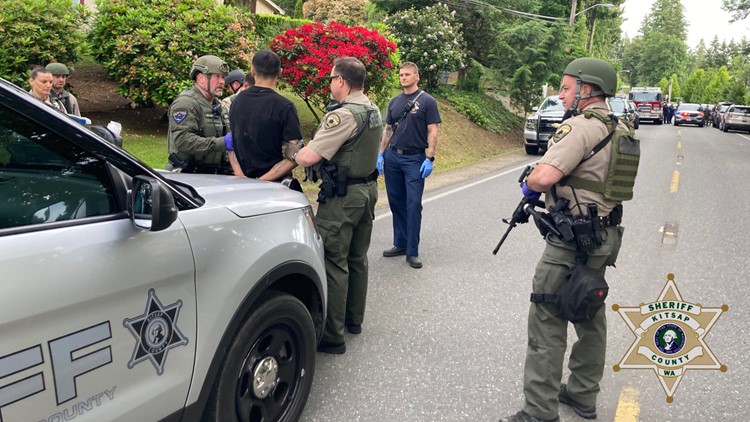 Deputies found a deceased man in an apartment building and a second man barricaded and armed with a rifle, according to the Kitsap County Sheriff’s Office.

BREMERTON, Wash. — A 27-year-old man was arrested Wednesday in connection with a domestic violence homicide in Kitsap County.

Deputies with the Kitsap County Sheriff’s Office (KCSO) responded Wednesday morning to the 6900 block of Old Military Road north of Bremerton over a reported “disturbance” in the area.

Arriving deputies found one deceased at the home and a second person barricaded and armed with a rifle, according to the sheriff’s office. The KCSO said the barricaded man was contained before he was taken into custody.

Neither the suspect nor any officers were injured, according to the sheriff’s office.

The suspect and victim lived in the home with a third resident, the sheriff’s office said.

The suspect is expected to go to jail on suspicion of second-degree murder on domestic violence charges.

Old Military Road was closed between McWilliams Road and Fairgrounds Road for several hours before reopening around 10am. The KCSO said the detectives would remain on the scene for several hours.

The Washington State Patrol said their bomb squad was requested and responded at the scene.