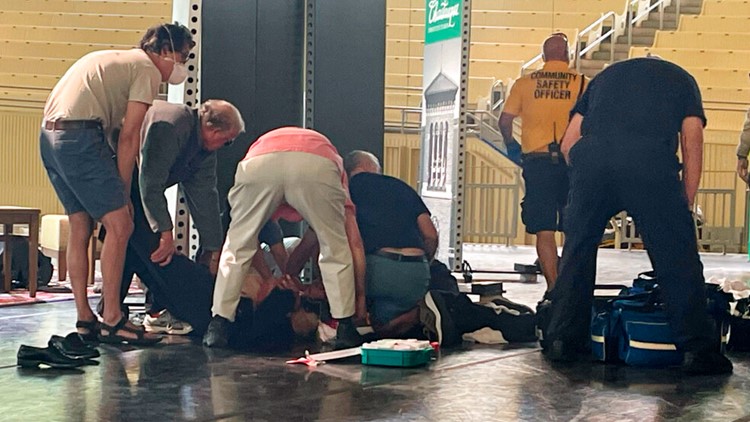 An Associated Press reporter saw a man storm the stage at the Chautauqua Institution and began punching or stabbing Rushdie as he was being introduced.

CHAUTAUQUA, NY — Salman Rushdie, the author whose writing led to death threats from Iran in the 1980s, was attacked on Friday while attempting to give a lecture in western New York.

An Associated Press reporter saw a man storm the stage at the Chautauqua Institution and began punching or stabbing Rushdie as he was being introduced. The author was taken away or fell to the ground and the man was held.

The New York State Police said a man ran onto the stage and assaulted Rushdie and an interviewer. They say Rushdie sustained a stab wound to the neck, Rushdie was taken to a nearby hospital by helicopter. His condition was not immediately known.

The interviewer suffered a head injury.

A state trooper assigned to the event took the suspect into custody.

This man was arrested by the police.-#NYPD#SalmanRushdie #New York pic.twitter.com/M2xt3nicbh

Rushdie’s book The Satanic Verses has been banned in Iran since 1988 because many Muslims consider it blasphemous. A year later, the late Iranian leader Ayatollah Ruhollah Khomeini issued a fatwa, or edict, calling for Rushdie’s death.

A bounty of over $3 million has also been put up for anyone who kills Rushdie.

The Iranian government has long distanced itself from Khomeini’s decree, but anti-Rushdie sentiment persists. In 2012, a semi-official Iranian religious foundation increased Rushdie’s bounty from $2.8 million to $3.3 million.

Rushdie denied that threat at the time, saying there was “no evidence” people were interested in the reward.

That year Rushdie published his memoir Joseph Anton on the fatwa. The title comes from the pseudonym Rushdie used while in hiding.

Rushdie is best known for his Booker Prize-winning 1981 novel Midnight’s Children, but his name became known around the world after The Satanic Verses.

The Chautauqua Institution, about 55 miles southwest of Buffalo in rural New York, is known for its summer lecture series. Rushdie has spoken there before.

Omicron seen as milder coronavirus but scientists aren't sure

This Is The Reason Why Shawn Mendes Canceled His World Tour

Family of American says he was freed by Taliban in swap