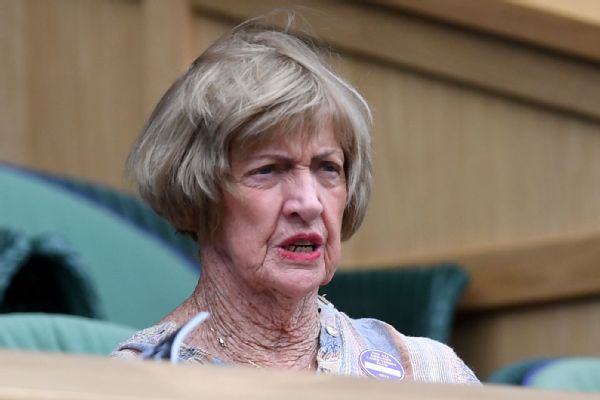 Australia’s Margaret Court believes she doesn’t get as much credit from the tennis world as she deserves for her 24 Grand Slam singles titles and that Serena Williams doesn’t return her admiration.

Williams – who holds 23 Slam titles, one just short of the record Court set from 1960 to 1973 – has been hailed in many circles as the greatest tennis player of all time after what she recently told the world after what appears to be her final appearance at Flushing Meadows that she is ready to “evolve” away from her active days. Williams, who turns 41 this month, was eliminated from the US Open by Ajla Tomljanovic in the third round on Friday night, a match in which she saved five match points to extend the more than three-hour proceedings.

“Serena, I admired her as a player,” the 80-year-old Court told Britain’s Daily Telegraph in a rare interview. “But I don’t think she ever admired me.”

Court said she had become persona non grata in the tennis world because of her Christian faith, which led her to oppose same-sex marriage when it was proposed in Australia.

“A lot of the press and television today, especially in tennis, don’t want to mention my name,” she said. “The honor wasn’t there for what I did. I have been given titles in my own nation, but they would still prefer not to mention me.”

Court also defended her performances against suggestions that they weren’t comparable to Williams’ because she played mostly in the amateur era.

“Serena played seven more years than me,” Court said. “I finished in my early 30s. People forget I took a two-year hiatus. I first retired…when I was 25 and thought, I would never go back to tennis.

Court pointed out that she was superior to Williams after they became mothers during their careers.

“I came back after two babies,” she said. “After having the first baby, I won three of the four Slams.” She added that “Serena hasn’t won a Slam since” she had a baby.

Williams’ last slam came in 2017 at the Australian Open, which she won in eight weeks with daughter Olympia without dropping a set.

Court also targeted suggestions during the interview that her 11 singles titles at the Australian Open were worth less than Williams’ seven.

“I listen to Billie Jean a lot [King] said people didn’t come to Australia in my early years,” Court said. “But world No. 1 Maria Bueno came down. So does Christine Truman, Ann Haydon, Darlene Hard. Also, Australia had some wonderful players. We had five girls in the top 10. Lesley Bowrey has won two French Opens.”

Court said she thought the life of a top tennis player was actually tougher in her day.

“I would have liked to have played during that period. I think it’s so much easier,” she said. “I would have loved to have taken family or friends with me. But I couldn’t. I had to go alone or with the national team. People don’t see it all.”

“We didn’t have psychologists or coaches with us. It’s a different world. That disappoints me – that players today don’t honor the game’s past.”

Court said she was disappointed that Williams barely mentioned her Australian opponent Tomljanovic after what was believed to be her last match at the US Open.

“I hated that Williams stopped mentioning her opponent when she was speaking,” Court said. “We were taught to honor our opponent. We respected one another.”

Reuters and The Associated Press contributed to this report.

NBC 'Days of Our Lives' Spoilers For September 6: Leo Pleads His Case, Sloan's Got Problems, And Another Salem Wedding Is In Store