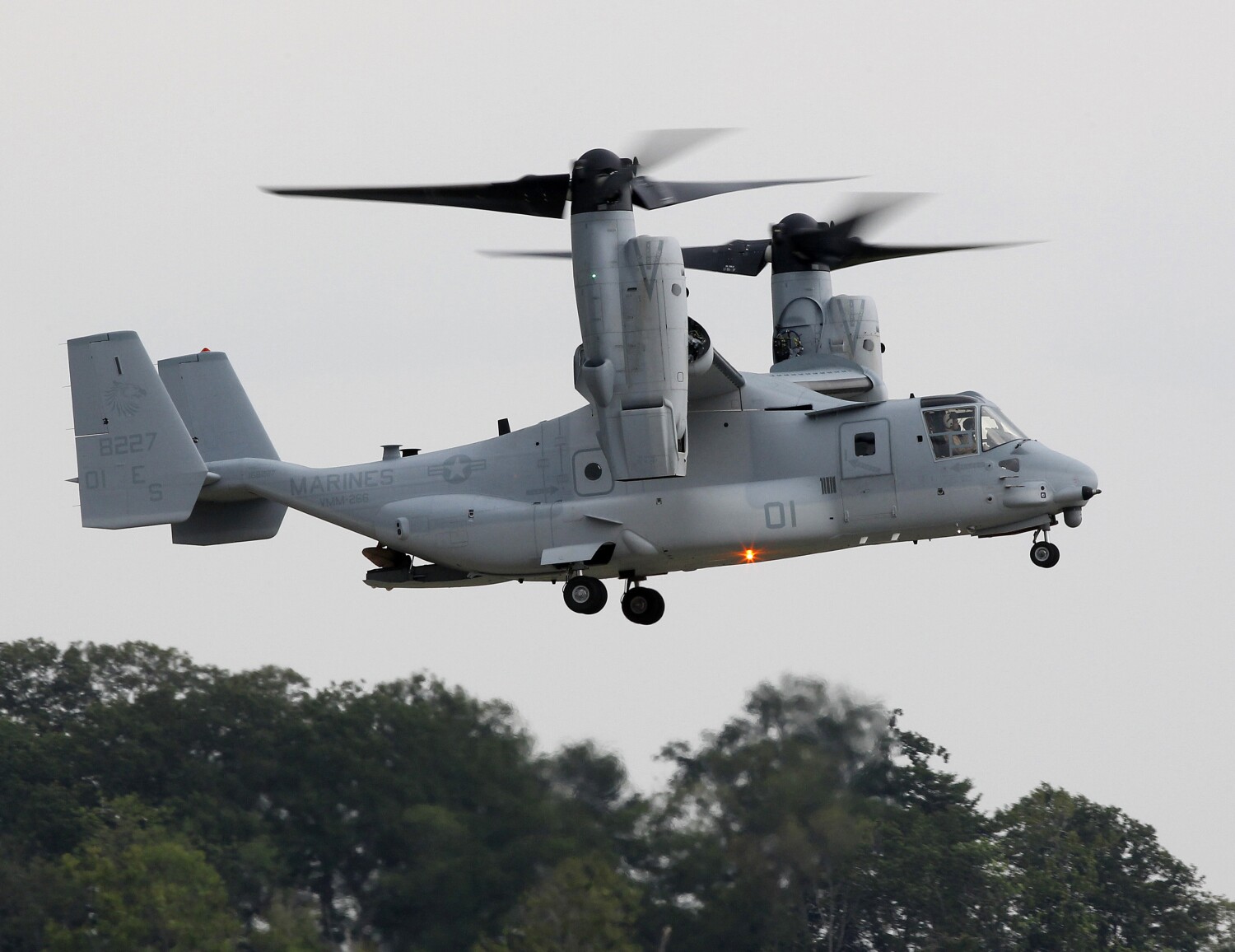 Military officials have named the five Marines who died when their MV-22B Osprey crashed during a training flight in Imperial County on Wednesday.

The Marines killed were:

“It is with a heavy heart that we mourn the loss of five Marines from the Purple Fox family,” said Lt. Col. John C. Miller, the squadron’s commanding officer. “This is an extremely difficult time for [us] and it is difficult to express the impact this loss had on our squadron and its families.”

The cause of the crash is under investigation, Englehart said.

It happened around 12:25 p.m. Wednesday near Coachella Canal Road and Highway 78, officials said.

Early radio calls from emergency responders at the scene and posts on social media suggested the plane may have been carrying nuclear material. Navy officials later said these reports were untrue.

The Osprey is a tiltrotor aircraft that can take off and land like a helicopter and fly like an airplane by pivoting its rotors. Versions of the aircraft are flown by the Marines, Navy and Air Force to transport troops and equipment. It has a higher top speed and longer range than a helicopter, but can hover and land in a similar way.

However, the aircraft has had a troubled and controversial history since its first test flights in 1989.

Wednesday’s crash was one of two involving military aircraft in Imperial County during a two-day span this week.

A Navy helicopter crashed near Palo Verde while on a training flight on Thursday.

One crew member was injured and all survived, officials said.

The incidents follow several other crashes across the country that have revived concerns – including from members of Congress – about the safety of military aviation going back several years.

In addition to those killed in the Osprey crash, another military member died in a plane crash in Southern California this month. Lt. Richard Bullock, a Navy pilot, was killed June 3 when his F/A-18E Super Hornet crashed in the desert in the general area of ​​Trona, the Navy said in a statement.

On Monday, two airmen were injured when an AH-64 Apache helicopter crashed near an Army base in southern Alabama, officials said. In March, a Marine MV-22B Osprey crashed in Norway, killing four.

Spurred on by those crashes, Congress could tighten requirements for the military’s flight safety reporting, according to Defense One, a military news site.

The Red Cross warns of a blood shortage. Here's how to donate