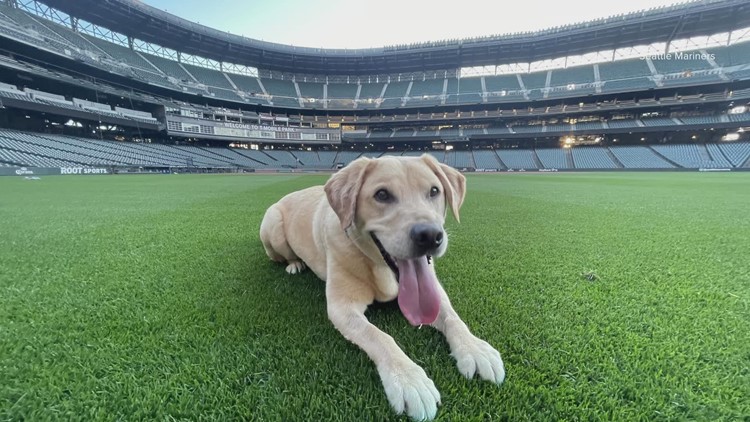 For the first time in franchise history, the Seattle Mariners are introducing a four-legged friend to the clubhouse.

SEATTLE — For the first time in their 45-year history, the Seattle Mariners are introducing a four-legged friend to the clubhouse.

Over the weekend, the Mariners organization announced it had adopted a four-year-old Labrador retriever by the name Tucker as the franchise’s first team dog. Tucker was adopted by OkanDogs, a local animal shelter in Cashmere, Washington.

Mariners manager Scott Servais and his wife Jill have been working with the shelter over the past year to relocate rescue dogs to their permanent homes.

“I’m just trying to raise awareness about bailouts across Washington state and there’s dogs for everyone out there and we hit a home run in that one, this little guy is awesome, our players love him, it’s beautiful little distraction for them in the clubhouse, they love the little guy,” said Servais.

OkanDogs President Tom Short is asking people to step up to the plate and bring dogs like Tucker home.

“I think all[rescue shelters in Washington]are pretty overcrowded, but I think it’s worse on the east side of the state, there’s less and less opportunity,” Short said.

The Mariners have a handful of Bark at the Park games each season, with the next on August 23. Team officials said this was not only a way for fans to get their puppies onto the field, but also a chance to partner with local shelters.

“People looking for dogs can get any type of dog anywhere, it’s out there for you, so adopt, don’t shop,” Servais said.

Tucker will be at M’s Clubhouse every day walking around the diamond during the warm up. Mariners officials said he is expected to join the team en route as well.

Los Angeles gas prices are falling. How long can it last?

Intersections: a semi-regular feature that tells stories around intersections of streets, people, cultures