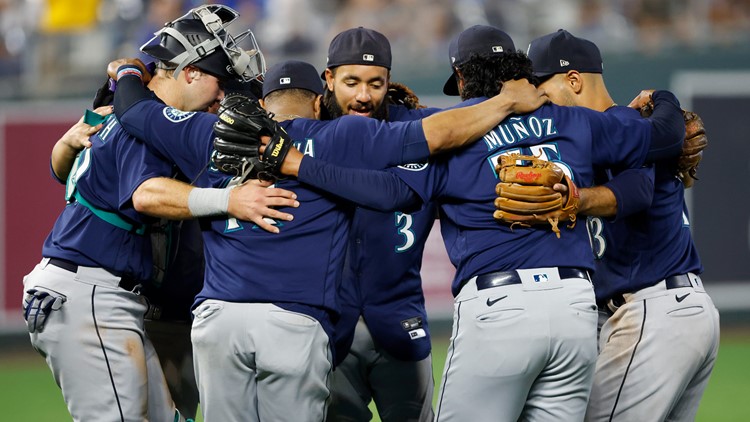 Despite a recent slip, the Mariners are close to securing their first playoff spot in two decades.

SEATTLE — Toward the end of each September, the phrase “magic number” becomes common in the lexicon of baseball fans across the country.

Teams both in the mix and on the fringes of Major League Baseball’s (MLB) postseason picture carefully examine the charts and calculate how many wins their team or losses their competitors need to earn a playoff spot.

The Seattle Mariners have the longest postseason drought in MLB and haven’t had a magic number to worry (or celebrate) in most seasons since they last made the playoffs in 2001.

However, the 2022 Mariners are firmly in the mix for one of three American League (AL) wildcards with nine games remaining.

So what is the Mariners magic number and how is that number evolving in the final days of the season?

What is a “magic number”?

Essentially, every time either the Mariners win or the team directly behind them in the wildcard standings — the Baltimore Orioles — loses, the magic number drops by one.

For anyone who wants to keep track of things at home, the formula for calculating the magic number looks like this:

What is the magic number of the Mariners?

As Wednesday’s games begin, the Mariners’ magic number is five. Despite a 5-0 home loss to the Texas Rangers on Tuesday night, the Orioles’ loss to the Boston Red Sox dropped the number from six to five.

The Mariners will host the Rangers again Wednesday night at 6:40 p.m. PT while the Orioles will play the Red Sox at 4:10 p.m. PT. If the Mariners win and the Orioles lose, the magic number drops to three. If just one of those results comes to fruition, the tally drops to four, and a loss for the Mariners and a win for the Orioles would keep the tally at five through the end of the night.

What are the Mariners’ most likely playoff scenarios?

When the season ended on Wednesday, the Mariners would take the last AL wildcard spot and face the Cleveland Guardians in a three-game series.

Based on the league’s new format, all three of those games would be played at Cleveland’s Progressive Field.

However, the Mariners still have a chance to move up in the wildcard standings in the final week of the regular season.

The Tampa Bay Rays are 1.5 games ahead of the Mariners for the second wildcard spot, and Seattle could top them overall if they compile enough wins and losses against Tampa Bay.

Playoffstatus.com, an unofficial website that tracks the postseason race, gives the Mariners a 39% chance of winning the sixth and final seed in the playoffs, a 38% chance of nabbing the Rays for the No. 5 seed pass, and a 23% chance to climb over rival Toronto Blue Jays and finish #4.

Who does each team competing with the Mariners play in the final week of the season?

Even in an off week, Seahawks coach Pete Carroll says a break from football isn’t in his DNA

After 42 years, Fred Roggin to sign off from KNBC Channel 4