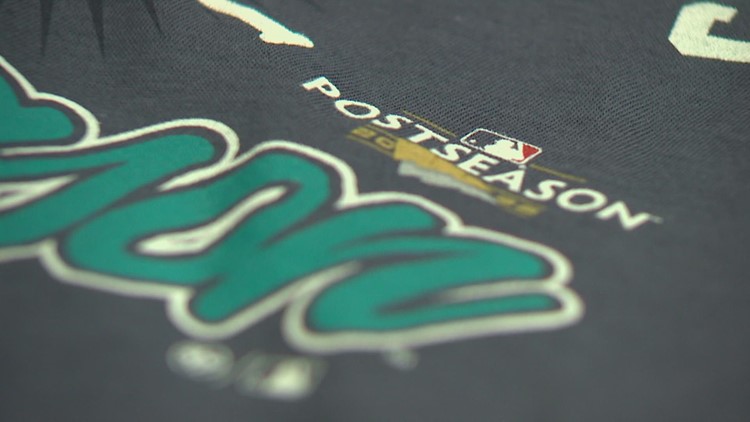 The fans not only filled the park, but also the Mariners team stores.

SEATTLE — Excitement for the playoff-tied Seattle Mariners is sky high as the team begins its final regular-season series against the Detroit Tigers at T-Mobile Park on Monday night.

Not only did fans fill the park, but they also filled the Mariners team stores, which sold out most of their postseason merchandise.

What was supposed to be a brief shopping spree turned into a stroll down memory lane for Michael and Charlotte Holman.

The Mariners last made the playoffs in 2001, something Michael Holman, who traveled from Portland with his 9-year-old daughter, wants to see.

Holman recalls attending games at Kingdome in the ’90s and being at what was then Safeco Field during the 2001 season.

“…being excited now and sharing postseason baseball with my kids is super exciting,” Holman said.

Also, part of the excitement is wearing what the players are wearing. Specifically, the post-season items worn during the team’s Sept. 30 playoff clinching celebration.

“A lot of it is sold out, but we found the field jersey here for Charlotte to represent the M’s,” Holman said.

You were lucky to get the shirt. According to that Mariners Team Store, after Friday’s win, most of the post-season merchandise was sold out. The store expects a large delivery on Tuesday afternoon.

“When the Mariners make the playoffs, money is no object when it comes to looking forward to the merch and the tickets and everything. So yeah, don’t worry about the price,” Holman said.

Holman said he snagged a few playoff tickets and hopes the M’s get a deep playoff run at the Electric Factory.

“I think they can really make a splash in the playoffs, but we’re excited about anything beyond that,” said Holman.

Rams, Cam Akers ‘working through’ things; RB out vs. Panthers

Chargers vs. Chiefs matchups, how to watch and prediction