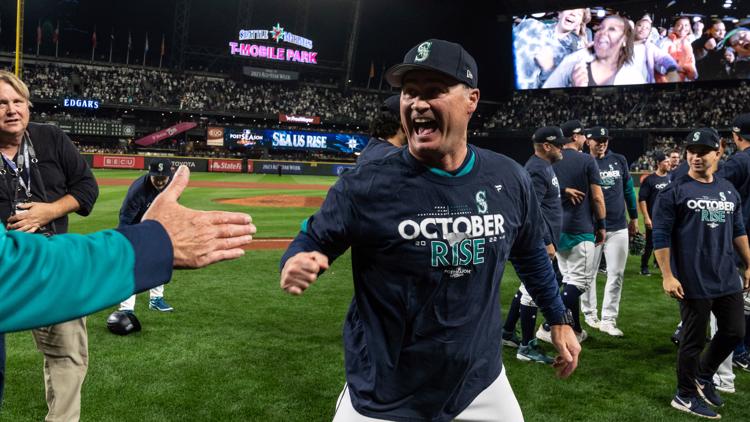 This is where the Mariners will take to the field for their first place in the playoffs in over two decades.

SEATTLE — The Mariners no longer have “magic numbers” to worry about as the organization secured their first MLB playoff berth in 21 years with a walk-off win over the Oakland Athletics on Friday night.

Though a starting spot has been confirmed, who the Mariners will face and when will still be decided. The MLB regular season ends Wednesday, October 5th and wild card games begin October 7th.

Here are all of the scenarios for where and when the Mariners will play in their first wild card games in two decades.

The Mariners are guaranteed a spot in the Wild Card round, but the team’s final five games will determine who and where they play in this series.

Currently, the Mariners (No. 5 seed) would play a three-game series against the Toronto Blue Jays (No. 4 seed), with all three games played north of the border at the Rogers Center.

Seattle is two games behind Toronto in the standings as of Saturday afternoon, and the only way to tie the wildcard streak would be to overtake the Blue Jays in the final five games of the season.

The Tampa Bay Rays are also a half-game behind the Mariners, and if they overtook Seattle overall, the Mariners would travel to Cleveland and instead face the Guardians in a three-game series.

Regardless of opponent, both American League Wild Card series begin on Friday, October 7th. Games 2 and 3 would take place on Saturday 8th October and Sunday 9th October and would be hosted by the higher seeded players.

All games will be broadcast on ESPN, but the timing of games will depend on which teams end up hosting and what other events the network has planned.

If the Mariners can advance through the team that is their wildcard opponent, Seattle would open the ALDS on Tuesday, Oct. 11 against either the Houston Astros or the New York Yankees.

All ALDS games will be broadcast on TBS.

Though the regular season isn’t officially over yet, all Mariners fans and Seattle supporters can spend the next week celebrating the franchise’s first playoff appearance since 2001.

Next Friday, however, the Mariners will be eager to prove they have much higher ambitions than simply breaking through the team’s postseason drought.

Prajanchai PK.Saenchai vs. Joseph Lasiri at ONE 157 – Preview and predictions