Football is considered by many to be the most beautiful game in the world. The way players pass, score and celebrate during their time on the pitch is elegant. While Mario Strikers: Battle League shares core DNA with its real-world inspiration, it focuses more on brutality than beauty.

Setup for Battle League is simple: players choose from the familiar suite of Mario, Luigi, and the rest of the Mushroom Kingdom, and assemble teams of four controllable characters and an AI goalie. From there, you descend into customizable arenas in front of raucous fans and vie for soccer supremacy.

At times, Battle League feels more connected to a fighting game than soccer. There are no rules; pulverize the enemy whenever you can. Kick them into electric fences. Shoot clams and banana peels at them. Use any brutal tactic you see fit. As a competitive person, I found the chaotic gameplay addictive, and I loved learning the ins and outs of the characters from match to match.

While the game doesn’t shy away from being a brutal blood sport, Mario Strikers also rewards you for using these mechanics with tact and strategy; every move on the square has consequences. Tackling is a powerful way to disrupt the opposing team and secure the ball, but it also gives opponents a chance to snatch an item from the crowd. If you miss a tackle and the opposing player dodges at the right moment, they’ll get a speed boost and increase their chance of scoring. The amount of strategy in Mario Strikers surprised me, but also kept me busy as I learned the best ways to score and be victorious. 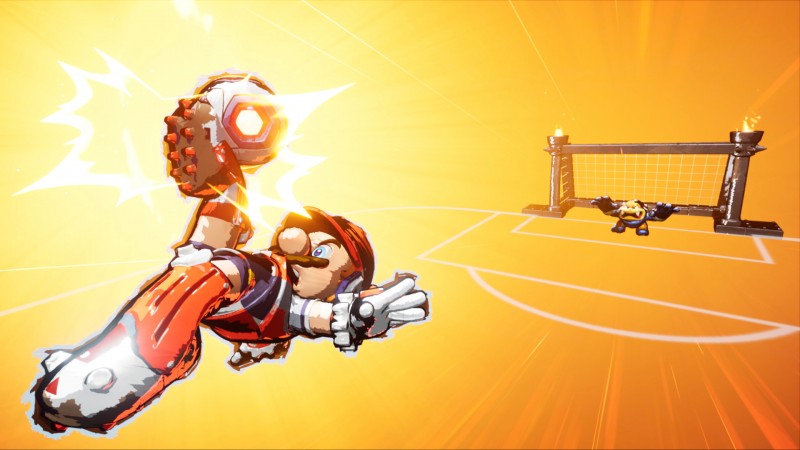 Nothing embodies this strategic dance better than Hyper Strikes. Earned by balls on the field, these stylish two-point shots can miss your opponent’s goalie if your timing is right. There is a risk, however, as timing the sequence incorrectly allows opposing goalies to block your shot, or worse, opens you up to tackles and breakaway chances from the opposing team. While the scenes are flashy and fun at first, I wish I could skip them and get back to the actual game. Nevertheless, these moments are intoxicating and lead to pure euphoria or a crushing defeat in no time at all.

While strategy is essential on the pitch, team building is almost as important in pregame, and each of Nintendo’s iconic characters has specific areas where they excel. Bowser may be slow, but he’s a good shot. Donkey Kong is adept at showing strength and knocking people off the ball. Toad races across the field in no time. Especially on a harder difficulty, keeping a balanced team is imperative when countering what the enemy squad throws at you. There were many times that I got burned for coming up against shooters who were struggling to pass and I paid for it when the opponents intercepted the ball and scored. This need for balance forced experimentation with characters I wouldn’t normally pick and gave meaning to my occasional fights as I figured out who best suited my playstyle.

Once you’ve found a team comp that you like, it’s important to start using gear and leveling up its best attributes. Coins earned through games can be spent on equipment, which affects individual character controls. These stat boosts come at a price, however, as each buff for one category brings down another. I largely ignored the gearing system at first, but as the challenge got steeper, I was happier with the boosts to passing and shooting as I delved further into Battle League’s various modes.

Mario Strikers loses some of its luster in these modes, with one exception. The single player experience comes from Quick Battle Solo sessions and Cup Battles. The former is your standard match, while the latter is a tournament where players level up and compete for trophies and bigger coin sums. Cup fights were more fun than the normal quick fight because I knew I was working towards more rewards. The problem is, aside from slightly scaling the difficulty and having teams tailored to a specific attribute, cup battles aren’t all that different from standard games. Sure, they were fun, but I found that they helped me learn the game more than they posed any significant challenge – apart from the occasional competitive championship bout.

While other modes offer tons of fun, Strikers Club is the real highlight. This new mode allows you to bring your unique character and create a football league with friends and the community. As a club owner, you can explore many features such as: B. Name your own league, create your own jerseys and even design the field. Some of these customization options are only unlocked by spending tokens earned from matches played in Strikers Club, which is a bit of a disappointment for those who only want to explore single player modes. Despite that, I enjoyed the increased sense of competition I felt playing online and I look forward to continuing to build my club and, over time, enjoying a full season with a group of friends.

For those looking for a bigger challenge, there’s a hard difficulty in Quick Battle. But it’s not for the faint of heart. Computer players choke and make you pay almost every moment you flip the ball or miss a tackle. I welcomed the added difficulty, having been able to waltz through previous cup fights, but it exposed some of the game’s more frustrating AI

Sometimes my goalie looked like Tim Howard in his prime, blocking everything around him without breaking a sweat. Other times they would let in the faintest shot from one of the corners and make me erupt in anger. Ditto for computer teammates, who generally did a good job of positioning themselves to score and defend, but then gracefully bounced a ball off of them, allowing the other team to score with ease. I make a lot of mistakes that cost me dearly during a game, but nothing was more frustrating than trying to give my best impression of Messi only to have one of my AI teammates cost me a game.

Mario Strikers: Battle League may not be the ultimate take on the world’s most popular sport, but its strategic matches, fun online modes, and high-energy animations make for a fun experience. While the single-player crowd might find the game a little lacking, Nintendo’s return to the field is bound to invoke the same triumphant highs and amicable lows that the company’s suite of other party titles are known for.

Jill Biden to L.A. college grads: 'Never forget where you came from'

How to move from LA to Joshua Tree's growing gay community

Trump Calls the Insurrection a ‘Hoax’ in Wyoming Speech

“I Feel It’s the First Step for Justice”: Lauren Pazienza, Whose Shove Allegedly Killed a Beloved Vocal Coach, Is Ordered to Jail