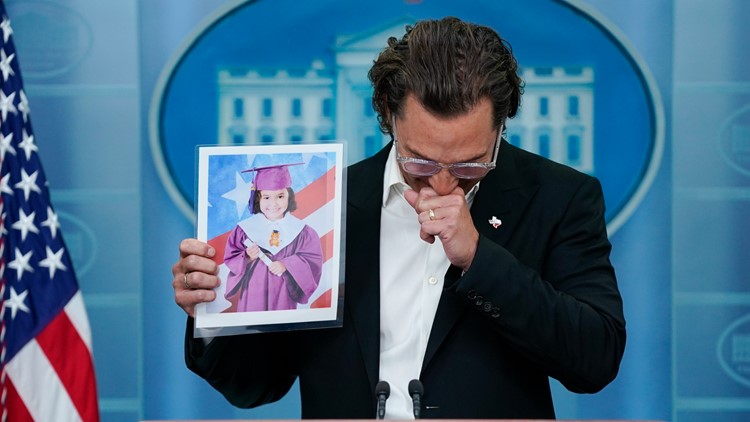 HOUSTON – Oscar-winning actor Matthew McConaughey was the focus of Tuesday’s White House briefing to urge Congress to “take it to a higher level” and pass a gun control bill to honor the children and teachers involved in the shooting at an elementary school in his hometown of Uvalde, Texas, last month. were killed .

In a deeply personal 22-minute speech, McConaughey offered a full-bodied exhortation for a deadlocked Congress to pass gun reforms that can save lives without violating Second Amendment rights.

McConaughey used his star power to argue for legislation in ways the Biden administration could not, making a clear connection to the small Texas town and vividly detailing the sheer loss of the 19 children and two teachers in the second worst mass shooting in US history.

“We want safe schools and gun laws that don’t make it easy for the bad guys to get the damn guns,” McConaughey said.

McConaughey, who was considering running for Texas governor earlier this year before accepting a pass, met briefly with President Joe Biden before speaking from James Brady’s briefing room to the White House press corps.

McConaughey, who declined to answer questions, spoke of learning to be a responsible gun owner as a youth in Uvalde. He said he and his wife drove back to Uvalde the day after the shooting and spent time with the families of some of the victims and others directly affected by the shootings.

He said every parent he spoke to had expressed that “they want their children’s dreams to live on.”

“They want to make their loss of life important,” McConaughey said.

He shared the personal stories of some of the victims, showing the artwork of one girl and the green tennis shoes worn by another.

McConaughey acknowledged that gun legislation would not end mass shootings, but suggested steps could be taken to reduce the likelihood of such tragedies happening so frequently.

“We need to invest in mental health care. We need safer schools. We need to limit sensationalist media coverage. We must restore our family values. We need to restore our American values ​​and we need responsible gun ownership,” McConaughey said.

We the People made morning-line favorite in Belmont Stakes

Podcast: A new militia at the U.S.-Mexico border

Celebration, Florida Father Convicted of Killing Entire Family and Dog After Living With Their Corpses For Weeks