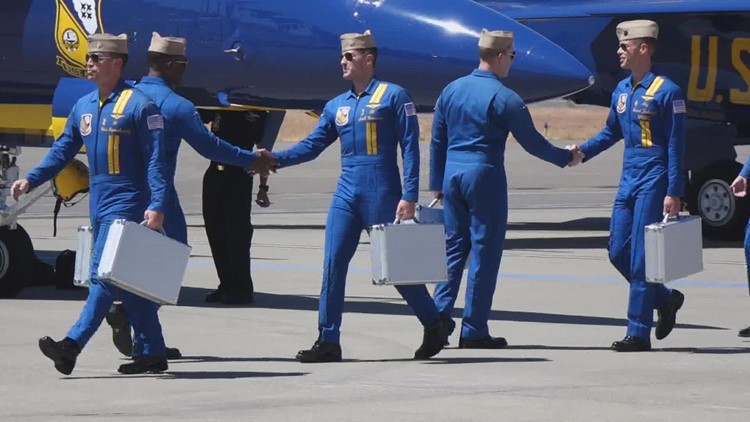 From the support team to the pilots, a Blue Angels show is a team effort.

SEATTLE — The Blue Angels return to Seafair this weekend and have brought some new birds with them.

The new Boeing F/A-18 Super Hornet jets are bigger, faster and louder than the previous jets that have flown them for more than 30 years.

For the first time since 2019, the US Navy Blue Angels squadron will perform over Seattle, and No. 6 Blue Angel pilot Julius Bratton says they want to impress.

“This is the ultimate teamwork show. From the support team on the ground to the pilots who will be demonstrating the aircraft’s maximum performance,” said Bratton.

Despite having clear skies and plenty of airspace to work with, the Blue Angels’ specialty is precision maneuvers where the jets can be as little as 18 inches apart.

Bratton says his love of aviation led him to pursue a career in the Navy. He started out as a team narrator before joining the show in the sky.

Bratton said he’s proud of the team’s diversity. Lt. Amanda Lee was selected as the first woman to join the Blue Angels demo team. She will officially join Team 2023 along with five other new officers.

The average Blue Angel tour lasts only two to three years. The Blue Angels perform across the country from March to November.

Cody Deccio works with public affairs for the Blue Angels and says this is a homecoming for him. Deccio was born and raised in Yakima, Washington and spent some summers with his grandparents in Kirkland.

“I remember going to the Blue Angels and staring at the sky and thinking how cool they were. It’s very exciting to come here now and be part of the team and show your pride and professionalism,” said Deccio.

Fans and commuters will be pleased to know that the I-90 floating bridge will remain open throughout Seafair as the flight deck was moved back in 2019.

The Boeing Seafair Air Show got underway on Friday and the Blue Angels will perform on Saturday and Sunday at 3:05 p.m.

https://www.king5.com/article/news/local/seattle/blue-angels-team-seattle-seafair/281-9ce2603f-fa80-40bc-81a4-5a7cda08f3e4 Meet some of the team who brings the Blue Angel’s show to Seattle’s skies

Podcast: A reporter hits the road to discover truths about America