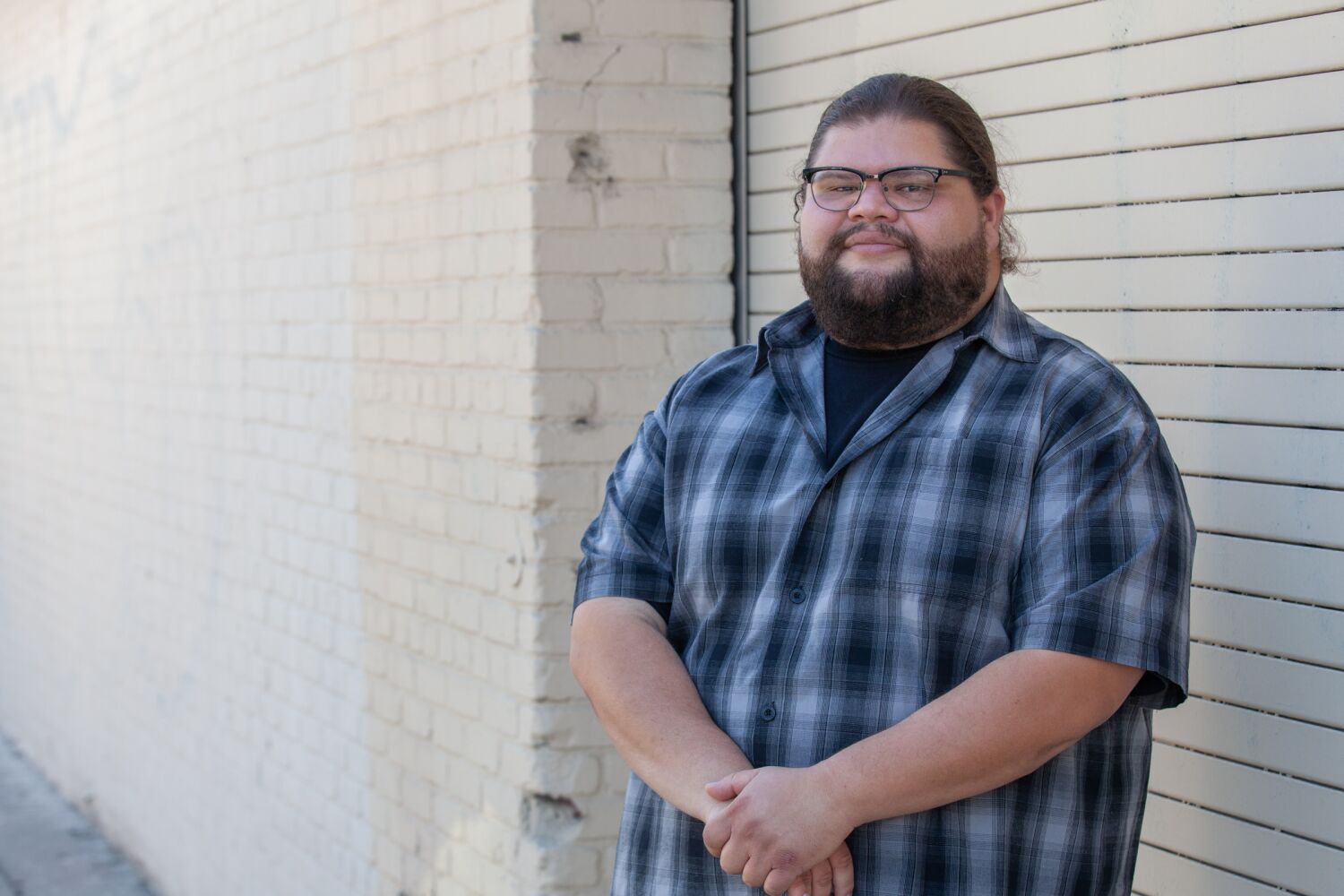 One afternoon in 2012, a man was driving down a residential street in southeast Los Angeles. Unbeknownst to him, a nearby Google Street View camera snapped a picture of him at that precise moment. Years later, multidisciplinary artist and educator Felix Quintana saw this image and recognized the person in the photo: his father.

With Google Maps Street View, the focus on buildings and streets decreases. By obscuring the faces captured between moments, people appear almost invisible. In his practice, Quintana manipulates these Google images using cyanotypes, an early photographic technique that produces prints coated with a Prussian tint. When creating collages, he plays around with different textures – some have a stucco finish, others are smoother. The materials and mounting pieces found refer to signs and landmarks unique to Quintana.

Working across the mediums of photography, poetry, drawing and sculpture, Quintana often poses a compelling question in his work: “How can we visualize the past in the present moment?” recently opened solo show Love is the Given of the Place at the Edouard de Merlier Photo Gallery, Cypress College and in a group show We Run Things, Things Don. t Run We” by Slanguage Studio.

The 31-year-old artist grew up in Lynwood, where his parents took refuge from El Salvador’s civil war. He grew up just three miles from the Watts Towers, yet there was a physical distance between him and the sculptural monument. “I think it’s a metaphor for how close and yet so far I was to world-class art,” he says. “It took my exploration by public transport or car to be able to witness something as profound as the towers.”

As a child, Quintana accompanied his mother to Encino, where she worked as a childcare worker. He vividly recalls being inspired by a Frank Romero mural titled “Going to the Olympics 1984.” Pastel cars, heart shapes and palm trees lined the walls of the Hollywood Freeway, slowly fading in the scorching sun.

Formative years included bus trips to Fairfax Avenue, a destination for skateboarders and hip-hop fans. Quintana got into photography as a teenager where he chronicled street events, backyard shows and graffiti. His parents supported his endeavors by gifting him a Nikon camera for a high school photography class.

He experimented with self-portraits while studying studio art and photography at Cal Poly Humboldt. “I did a lot of interior work,” he says. “It was rare to photograph brown male bodies.” Quintana recorded himself performing free-flowing dance moves — stacking long-exposure photos of light to make a mark. He found that each image revealed more proportion and depth. “The camera was like a brush or pen,” he says. “It was very abstract.”

After graduating, Quintana worked as an artist teacher, adopting models of social practice introduced by artists and educators Mario Ybarra Jr. and Karla Diaz of Slanguage Studio, an artist-run space in Wilmington. He later earned a Master of Fine Arts in Photography from San Jose State University.

It was there that Quintana discovered that cyanotypes – once used in architectural designs – could serve as LA’s emotional and cultural blueprint. This art form would allow him to engage with themes, bringing people, objects and places into focus, while also giving context to signage and outdoor structures, including walls, gates and sidewalks that Street View often neglects. The manual approach of cyanotypes, which countered the speed of Google’s technology and digital characteristics, allowed Quintana time to carefully develop the image.

Quintana cites James Rojas, a community activist and urban planner whose concept of “Latino urbanism” explores how traditions are part of the cultural landscape, as a key influence. “If you go to East Los Angeles,” shares Quintana, “you’ll find that the houses don’t start at the front door; they begin at court.”

Quintana knows the history of photography but enters the medium in a new way, says Vanessa Arizmendi, Associate Curator at the Hammer Museum.

His process is multifaceted: Quintana takes screenshots from Google images and creates digital negatives that undergo intensive editing. He then hand coats a piece of paper with a cyanotype solution that gives the piece smoothness. After drying, he presses a piece of glass onto the materials, creating a contact impression. Quintana then scrapes the surface with a blade, leaving behind, for example, white sketches of bushes sprouting from asphalt, capturing elements of extinction and existence. In the final stage, the photo is exposed to ultraviolet light and developed in liquids.

“The images he works with, even just the etchings, palm trees, and the imitation of bars on a metal grille door, are so much about a certain type of language that some of us are familiar with,” says Arizmendi. This familiarity she describes is palpable among those familiar with the subject, almost as if the inscriptions are part of collective memory.

His most circulated series, Los Angeles Blueprints (since 2019), is a response to the work of Doug Rickard, a white San Jose artist and photographer, who created a collection of Street View images in which he mainly works Communities of color archived the rust belt. For Quintana, obtaining photos of monitored sites opens conversations about intervention and pays respect to pedestrians, street vendors, and workers.

In his play Families Walking to Paramount Swapmeet (2022), rituals in public space become sacred. Some of the titles come from Quintana’s own observations, such as “Posted on an Inglewood Corner, City of Changes” (2022) or “Cholo Walking by the Pawn Shop at a Strip Mall in Compton” (2022).

He adds another dimension with collages in Para los Lil Homies (2019-present), some of which feature in his solo exhibition. “A lot of my work is a dialogue in response to literary material,” he says. The chosen title “Love is the Given of the Place”, borrowed from Roberto Lovato’s memoirs, takes up Joan Didion’s reference to El Salvador: “Terror is the Given of the Place”.

“Although there is struggle in these neighborhoods, there is beauty,” says Quintana. The show pays homage to the Salvadoran diaspora and features blueprints, mixed media collages and installations. He adds, “It’s also dedicated to LA and the places that have influenced and impacted me a lot.”

Quintana is also exhibiting with Slanguage Studio as part of its 20th Anniversary group show. At the Angels Gate Cultural Center in San Pedro, Quintana, Quintana focuses on site-specific works with framed postcard cyanotypes that represent a conceptual itinerary in Wilmington. Outside, Quintana converts the images into a digital collage banner that offers a panoramic view. It serves as an “insider tour” with well-known sights such as the Don Hotel or the Fallas Paredes shop. Quintana also chose an image of a historic Chicano mural painted on a former liquor store restored by local artists and the building that houses Slanguage Studio when it was an auto shop.

“I really wanted to honor Wilmington and the places that you only know if you grew up there or, in my case, had a lot of friends and mentors from there who would show me those places,” he says.

Quintana has long pondered how we consume images, not just how we make them, and what tools young people are equipped with when interacting with self-images. It’s part of what drives him to teach digital photography at Cerritos College and art education at UCLA. “My main foundation is to do my best for the next generation that will follow me,” he says.

Brooklyn Nets GM Sean Marks, in his own words

First Starfield Footage Shows Off Massive Scale With Over 1,000 Planets And Ability To Build Your Own Spaceships