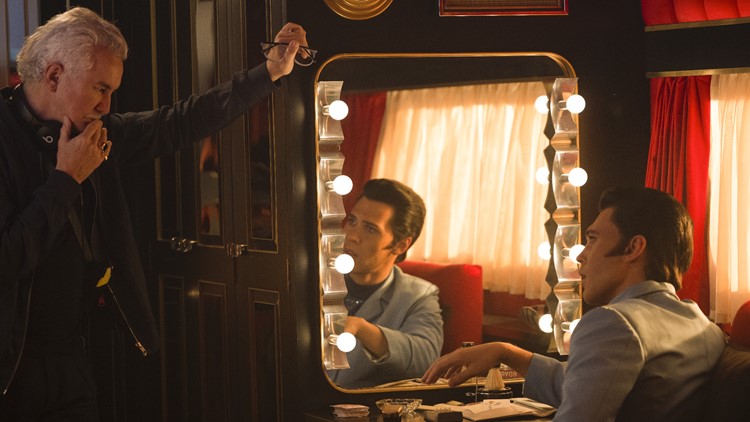 The musical biopic stars Austin Butler and Tom Hanks and is directed by Baz Luhrmann. #k5evening

Directed by Baz Luhrmann, his life becomes a dazzling, dizzying spectacle in which actor Austin Butler, despite some self-doubt, rises to the occasion.

“I’ve been working and living that for a year and a half and suddenly you’re like, ‘This is the moment of truth,’ where you have to get out of there. All of that is for naught if it doesn’t live in front of the camera,” he said.

“ELVIS” is told from the point of view of Colonel Tom Parker, Elvis’ controversial promoter who cheated him out of millions of dollars. He is played by a prosthetically enhanced Tom Hanks.

“Everyone says, ‘How did you deal with that?’ I said, ‘You sit in a chair and wait.’ That’s all you do, you wait,” Hanks said. “And then you go to work and you’ve done half the work for yourself.”

Luhrmann helped write the script and said there were a few things he knew he did NOT want the film to do.

“A trope. But not just a biopic either,” he said. “You can’t tell the story of Elvis without talking about America in the 50’s, 60’s and 70’s because in one way or another he’s the focus. I think it’s the most American of all stories.”

Despite this, the film was shot in Australia. Locations like Graceland have been recreated in minute detail.

“It’s weird to feel so familiar with a place you’ve never been, and I felt that the second I landed here,” she said.

Another “character” in the film is Beale Street, where Elvis was influenced by rock and roll and rhythm and blues created by black artists.

“He paved the way for guys like Prince, Michael, Childish Gambino, Andre 3000 — he opened that door for all of us to use as a blueprint,” Mason said. “I felt my only responsibility was to serve and honor the situation.”

“Being the first person to put heavy distortion, crank that amp up and distort, take blues bending and turn it into the shred that we know — all of that is the aesthetic,” she said. “That’s the best part. It’s important, certainly for black America, but for the diaspora in general, to see how we invent things that resonate for generations.”

Elvis was also influenced by his relationship with BB King, played by Kelvin Harrison Junior.

“It’s a testament to BB’s maturity and wisdom, I think he saw it and said ‘wow artists inspire other artists and he was inspired by us and what an honor to be recognized through his music'” said Harrison.

From that music to the complicated relationships, the film shows “The King” through a kaleidoscope lens as big and bold as Elvis himself. What it lacks in script cohesion it makes up for in performances — especially Butler’s, which is well worth the price of admission .

Travel and accommodation are provided by Warner Bros.

https://www.king5.com/article/entertainment/television/programs/evening/meet-the-cast-who-helped-bring-elvis-to-life/281-b4441691-fc2e-435c-8f5d-f9d1d7ba04f2 Meet the cast who helped bring ‘ELVIS’ to life

15 Best Workout Shoes for Men in 2022, from CrossFit to Weightlifting

Lil Scrappy CONFRONTS Momma Dee … For Raising Him In Brothel & A Trap HOUSE!!!

How to pronounce Adele’s name ‘perfectly’ — her way