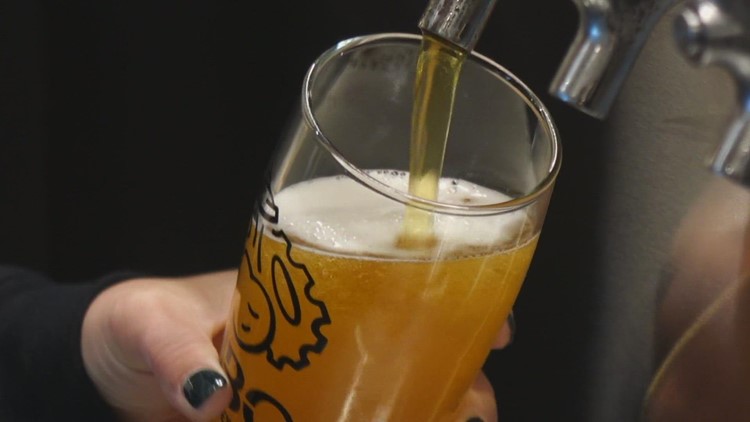 Washington’s first black-owned brewery has expanded into what feels like a homecoming for co-founder Rodney Hines.

SEATTLE — Washington state’s first black-owned brewery has expanded into what feels like a homecoming for co-founder Rodney Hines.

“Our mission is to brew bloody good beer and build a stronger community to inspire bigger dreams for everyone,” said Hines.

He can’t hide his pride in the new flagship store on East Cherry Street in Seattle’s Central District.

“We wanted to be in the heart of a residential neighborhood and we cater to the central district, I’m just a few blocks from the CD,” Hines said.

The new space is still in the final stages of construction, but it’s open because Hines said they heard the calls from customers.

“The community has been asking ‘when are you going to open?’ for a while. and we are as now.”

Hines said the dream of opening a location in the Central District is helping to bring about a cultural revitalization in the area. Community building is a focus for Métier. Hines believes this is accomplished through representation and hiring employees who reflect the neighborhood.

That number has grown but is still lopsided compared to the estimated 9,000 craft breweries in America.

“Even our new logo was designed by Conflare, a local agency owned by black women,” Hines said

The Taproom is a true melting pot of culture and diversity. The space was designed by Greene Home Redesign, a Black and Veteran owned company.

“The artwork on the cans was done by women and people of color,” Hines said.

Metier is currently working on developing a supply chain that is as diverse as possible.

“There’s only one minority-owned hop grower in eastern Washington, so we’re working on that.”

Hines said when it came to food, he knew the popular Japanese street food enjoyed by diners in Woodinville would be a perfect fit. Umami Kushi is known for the okazu pan – a fried bread stuffed with a savory filling. BBQ Pork, Jerk Chicken, Black Eye Pea & Salmon are just some of the popular options.

Taproom Manager Mercedes Robinson doesn’t just invite friends to the Taproom, she invites them to be part of the story.

“To be able to say that we’ve come home, like, to headquarters, where this community has been going through and is going through some kind of renaissance, and we’re going to stay here to stay, means to me and the people who working here and I, really some community,” said Robinson.

Métier Brewing hopes the new community space will reflect the diverse neighborhood and its customers. The opening weekend resulted in hundreds of diners queuing down the block.

“It kind of caught us off guard!” laughed Hines. “We had black, brown, white, young and old all participating in something new.”

Hines said the turnout and community support for this new space validates their mission to empower the community and play a role in revitalizing the area’s cultural scene.

“What we saw was the community came out and hugged us. They said, “Yes, you’re home and it feels like home.”

Hines said they want guests to see themselves as they enter the new 2,000-square-foot space, and that’s why there’s a long mirror behind the bar.

“One of the first things you’ll see when you walk into the store is our ‘Beer it forward’ wall, where people buy a beer for someone and put it on the board. Teachers, firefighters, and notes like that are pretty common.”

The current drinks, waiting to be claimed, belong to a “new parent” and an “emergency room nurse.”

A tribute is even offering a drink for everyone who has lost someone to COVID-19.

How the body's immune system tries to fight off COVID-19

Pacific Airshow 2022 in Huntington Beach: Here’s how you can watch it all live on Hulu