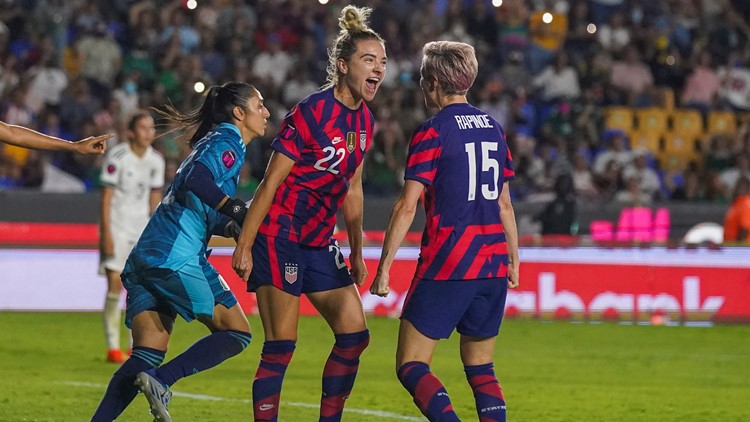 Kristie Mewis scored in the 89th minute to break a stalemate and the United States beat Mexico 1-0 in the CONCACAF W Championship on Monday night.

USA won Group A of the eight-team tournament and meet Costa Rica in the semifinals. The Americans had already qualified for the 2023 Women’s World Cup as one of the top two teams in their group.

Mexico’s Lizbeth Ovalle was sent off in the 73rd minute for a foul on Rose Lavelle. The United States was flagged for offside on the Mewis goal, but it was not checked.

While Mexico defended well against leaders United States, the hosts were eliminated from qualifying for next summer’s World Cup in Australia and New Zealand.

Jamaica beat Haiti 4-0 on Monday night to qualify for their second consecutive World Cup and advance to a semifinal match against Canada. Bunny Shaw had two goals and Trudi Carter and Drew Spence also scored for the Reggae Girlz.

Haiti finished third in Group A but have a shot at the world title if they play in an intercontinental playoff in New Zealand in February.

W Championship teams observed a minute’s silence for Jedine Carr, a player with Jamaica’s youth national team, who was fatally shot Friday on her way to training with her club team.

Canada defeated Costa Rica 2-0 the previous Monday to win Group B. Both teams had previously qualified for the World Cup as the top two in their groups.

Jessie Fleming scored in the fifth minute and Sophie Schmidt added a goal in the 69th minute for the Canadians, who have yet to concede in the tournament.

Panama defeated Trinidad and Tobago 1-0 on Monday to secure third place in Group B and a place in the intercontinental playoffs for another shot at the World Cup. Marta Cox scored for Panama just before half-time.

The winner of the eight-team W championship will receive one of the region’s spots at the Paris 2024 Olympics. Canada won the gold medal at the Tokyo Games.

“We talked about how we got the World Cup, but these Olympics mean the world to this group and that’s where we’re headed,” said Canada coach Bev Priestman. “We knew we had to keep our standards high wherever we went. Overall I felt it was a professional performance, not perfect but professional.”