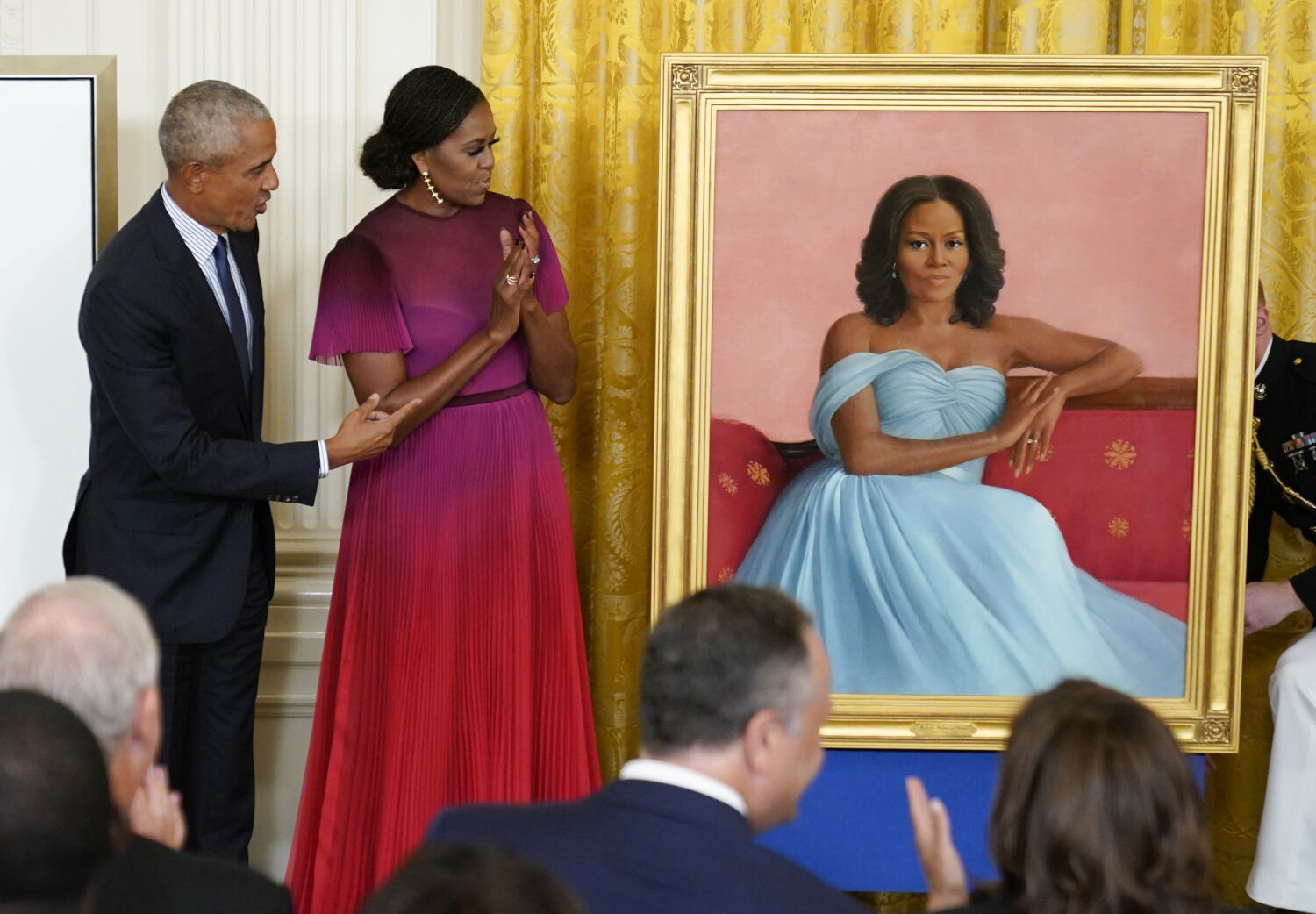 Historically, during the tenure of their successors, former Presidents and First Ladies return to the White House to officially unveil their portraits. That has not happened in President Trump’s four-year tenure. On Wednesday, President Biden welcomed the Obamas to their former home for what was, in many ways, a light-hearted, happy reunion.

But after Biden and Obama spoke and exchanged the usual self-deprecating jokes and praise, former First Lady Michelle Obama stepped up to the President’s lectern in the East Room and delivered a moving reflection on the importance of the ceremony and the state of a country in turmoil.

Wearing a dramatic fuchsia red dress and her hair in pigtails, Obama reflected on her humble childhood on Chicago’s South Side and the unlikelihood of someone like her ending up with her portrait in the White House.

“Even though I’m still a bit embarrassed about it all, I see why moments like this are important, why it’s all so necessary,” she said. “Traditions like these are important, not just for those of us who hold these positions, but for all those who participate in and observe our democracy.”

The very mention of democracy seemed meaningful. And as she went on to describe America’s peaceful transfer of power, which had long been taken for granted until Trump’s brazen attempts to retain the presidency after he lost the 2020 election, it was crystal clear who she was talking about, though she never once used his name mentioned.

“You see, the people, they make themselves heard with their voice,” she continued. “We are holding an inauguration to ensure a peaceful transition of power. Those of us who are fortunate enough to serve, as Barack said, work as hard as we can, for as long as we can, as long as people choose to keep us here. And once our time is up, we move on; and all that remains in this sacred place is our good efforts and these portraits, portraits that connect our history to the present, portraits that hang here as history continues to be written.”

Michelle Obama has never been completely comfortable in public and has rarely appeared in public since leaving the White House nearly six years ago. But her words silenced the room full of friends and former employees as she continued.

“So for me, this day isn’t just about what happened. It’s also about what could happen. Because a girl like me should never be up there next to Jacqueline Kennedy and Dolly Madison. She should never live in this house, and she definitely shouldn’t serve as First Lady.

“But I’ve always wondered where the ‘should’ come from? Who determines it? And all too often people in this country feel that they have to look a certain way or behave a certain way in order to belong, make a lot of money or belong to a certain group or class or a certain creed, to matter. But what we see today, a portrait of a multiracial child with an unusual name and the daughter of a water pump operator and a stay-at-home mother, is a reminder that there is a place for everyone in this country.”

“That’s what this country is about,” Obama continued. “It’s not about blood, pedigree or wealth. It’s a place where everyone should have a fair chance.”

Although Obama has long made it clear that she has no interest in ever running for the presidency herself, her words and story can sound like those of a potential candidate. And pollsters continue to probe her popularity: a recent poll showed her as the top candidate for 2024 should Biden decide against a second term.

Obama also praised the artist who painted her portrait, Sharon Sprung, noting that she joins “a small but powerful group” of female artists who have made official White House portraits.

“This day isn’t about me or Barack, it’s not even about these beautiful paintings. It’s about telling that broader story, a story that includes every single American in every single corner of the country,” she said.

“As much as some people would have us believe that this story has lost some of its luster, that division and discrimination and everything else may have dimmed its light, I still know deep in my heart that what we share is how my husband continues to do it proportion is so much bigger than what we don’t do.

“Our democracy is so much stronger than our differences, and this little South Side girl is blessed beyond measure to have felt the truth of this larger story.”

Kendall Jenner Hints She Could Be Back Together With Devin Booker