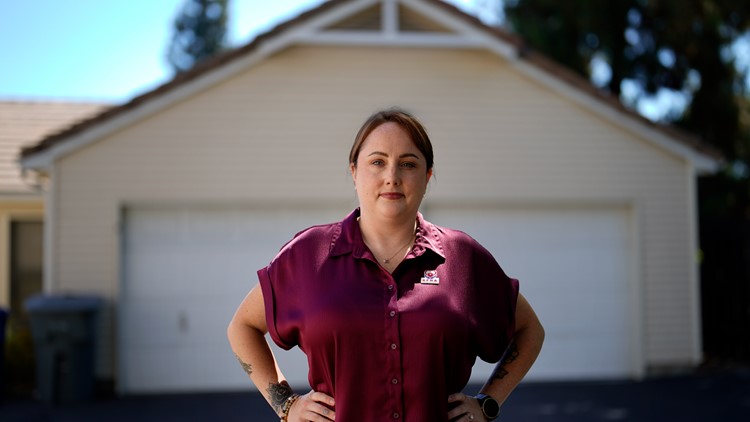 Some members of Congress are pushing for legislation that would force the Department of Defense to rethink how it handles housing.

When Kristin Martin found out her husband was being transferred to Naval Base San Diego, securing housing for her family of five quickly took over her life.

Placement on the base was not an option – the wait list for a four-bedroom home in the neighborhoods they qualified for was 14 to 16 months.

The military hotels near the base, where newcomers can pay low rates if they get their bearings, weren’t full either.

So Martin, whose husband is a lieutenant, cast a wide net over San Diego and began bidding for rentals unseen.

“I woke up and the first thing I looked at was real estate,” Martin said. “I watched it at noon before I went to bed. I had notifications set. It became a full-time job.”

More than 30 rental applications later and hundreds of dollars in filing fees down the drain, the Martins finally found a home.

But there were caveats. You would have to start paying rent a month before the actual move. And at $4,200 a month, her rent was nearly $700 more than the monthly basic housing allowance, known as BAH, that her husband receives.

“We’ll probably be here for two or three years, so that could be $20,000 that we’re paying out of pocket through the BAH just for the rent,” Martin said last month.

“It affects us personally, but then I think about how we were once a junior family. I can’t imagine the struggles (they) are going through.”

Housing has long been an important benefit for military personnel, a payroll supplement that lags behind the private sector. But amid record-breaking rent spikes, the Department of Defense has neglected its commitment to helping military families find affordable housing, military officials and housing activists say.

That has forced many to settle for substandard homes, work extremely long commutes, or pay thousands out of pocket that they didn’t budget for.

RELATED: Tips for saving when commuting when inflation is high

“We have families that come to us who are on exorbitantly long waiting lists and are in houses they can’t afford, like an Airbnb rental, or they’re in a hotel, or they’re camping in tents, or they’re living in RVs,” said Kate Needham, a veteran who co-founded the nonprofit Armed Forces Housing Advocates in May 2021.

“I don’t think the civilians really understand that – they might think we’re living in free housing and just having a great time and making a lot of money. And that is not the case at all.”

Reports of the housing shortages being felt by military families have alarmed members of Congress who are pushing legislation that would force the Department of Defense to reconsider how housing is handled.

A common complaint is that with rents rising nationwide, housing allowances, which vary by rank and are recalculated annually, have not kept pace with rental markets, despite being designed to cover 95% of rental costs for the roughly two-thirds of active-duty personnel who work off-base lives.

According to a data analysis by The Associated Press from five of the most populous military bases in the US, housing benefits at all ranks have increased by an average of 18.7% since January 2018. In that span of time, rents have soared 43.9% in these markets, according to real estate company Zillow: Carlsbad, California; Colorado Springs, Colorado; El Paso, Texas; Killeen, Texas and Tacoma, Washington.

And due to tough off-base markets, on-base housing has become a desirable commodity, with many bases having long waiting lists.

Needham argues that the disconnect between military housing benefits and the current market should alarm officials already struggling to recruit the next generation.

“If you can’t afford your job, why the hell would you want to keep the job?” said Needham.

The Department of Defense has not commented on whether housing issues have become a retention issue. But defense officials said military housing offices are monitoring markets and offering tools to help families find “suitable, affordable housing, whether on or off base.”

“The Department of Defense is committed to ensuring that Soldiers and their families have access to affordable, quality housing within a reasonable distance of their assigned duty station,” it said.

At MacDill Air Force Base in Tampa, Florida, the housing benefit used to be in line with the local market. In January 2020, a high-ranking Airman with no dependents received a monthly housing benefit of $1,560, compared to the typical Tampa-area rental of $1,457, according to Zillow. But since then, rental prices have skyrocketed to an average of $2,118 a month in July, while a senior aviator’s housing benefit is currently $1,647.

With such a disparity and those living off-base, it’s no wonder nearly all of MacDill’s 572 homes are full.

Renee Thompson, a Tampa real estate agent, said it’s common for service workers to rent homes that are an hour’s drive from the base.

“No home on the market today even comes close to a military member’s BAH,” said Thompson, who served in the Army. “It’s really discouraging.”

Frustrated by what she called the Department of Defense’s lack of transparency in how housing benefits are calculated, Rep. Marilyn Strickland, D-Wash., introduced a measure that would give the Department a year to review its process and to report on how accurate the current system is.

BAH is like an “algorithm that needs regular updates,” said Strickland, whose district includes the massive Lewis-McChord Joint Base near Tacoma, where many military families struggle to find affordable housing.

“The vast majority of people make their living from the post, so this is incredibly urgent,” she said.

REVIEW: No, military veterans’ spouses cannot teach in Florida without a college degree