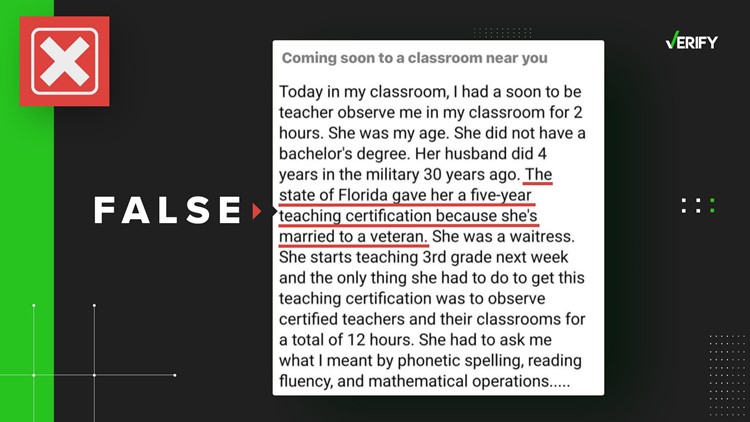 Veterans without a bachelor’s degree can obtain a temporary teaching certificate in Florida. However, this does not apply to their spouses, despite claims on social media.

Many school districts across the country, including Florida, are struggling to hire teachers.

In response, Florida has announced initiatives aimed at “supporting and growing” the state’s teaching workforce.

Since late July, some people on social media have claimed that the state’s effort to hire more teachers involves allowing the spouses of military veterans to teach without a college degree.

A Reddit user shared a story about this claim in a since-deleted post. It was also shared on other social media platforms like Facebook. The story goes that a woman with no bachelor’s degree in Florida received a five-year teaching certificate because she was married to a veteran who served four years in the military 30 years ago.

“She was a waitress. She starts teaching in 3rd grade and the only thing she had to do to get that teaching certification was to observe certified teachers and their classrooms for a total of 12 hours,” reads part of the story shared on social media .

Can Spouses of Military Veterans Without a College Degree Teach in Florida?

No, the spouses of military veterans cannot teach in Florida without a college degree. There is a program that allows veterans who have not yet completed their bachelor’s degree and meet certain criteria to earn a five-year temporary teaching certificate – but their spouses do not.

In early July, Florida began issuing five-year temporary teaching certificates to military veterans who have not yet earned their bachelor’s degree and meet the following requirements:

It’s unclear where the misinformation about veterans’ spouses came from, but the claims may have come from language on the state Department of Education’s website.

According to the Certification Pathway Program website, “The Florida Department of Education is proud to offer US military personnel, veterans and their spouses the opportunity to be part of our team working hand-in-hand to advance Florida’s education system for… improve students of all backgrounds and skills.”

More from VERIFY: Yes, some Florida teachers have been told that new state laws mean they can’t buy or accept donated books

The line on military spouse opportunities likely refers to separate legislation that waives initial teacher certification fees and certification exam fees for active-duty military personnel, veterans, and their spouses. However, military spouses are still required to have a bachelor’s degree to teach.

The website adds that “military spouses and families are not eligible” for the Certification Pathway Program, but internet archives show the clarification was not always included on the site.

Using Wayback Machine, a digital archiving tool, VERIFY found a July 18 version of the program’s website that used the same language but did not include the current clarification that military spouses and family members are not eligible. The header on the page also read, “Military Personnel, Veterans, and Spouses.” Currently, this header only says “Military.”

The text of Florida Senate Bill 896, which established the certification path program, also makes no mention of military spouses or family members.

More from VERIFY: No, Florida Gov. DeSantis did not defend the FBI’s Mar-a-Lago search for “Hannity.”

It lists the eligibility criteria outlined above by the state Department of Education, adding that the applicant must be at least 18 years of age, submit an affidavit agreeing to abide by the principles of the state and federal constitution, and be “competent and able “ must be the fulfillment of the duties, functions and responsibilities of an educator.”

The legislature also requires that the recipient of a temporary teaching diploma must be assigned a mentor for two school years who has a valid personal certificate, at least 3 years of teaching experience and an “effective or high-impact performance assessment”.

There Is No Bright Line on Taxing Carried Interest

The Conservative Case for Optimism