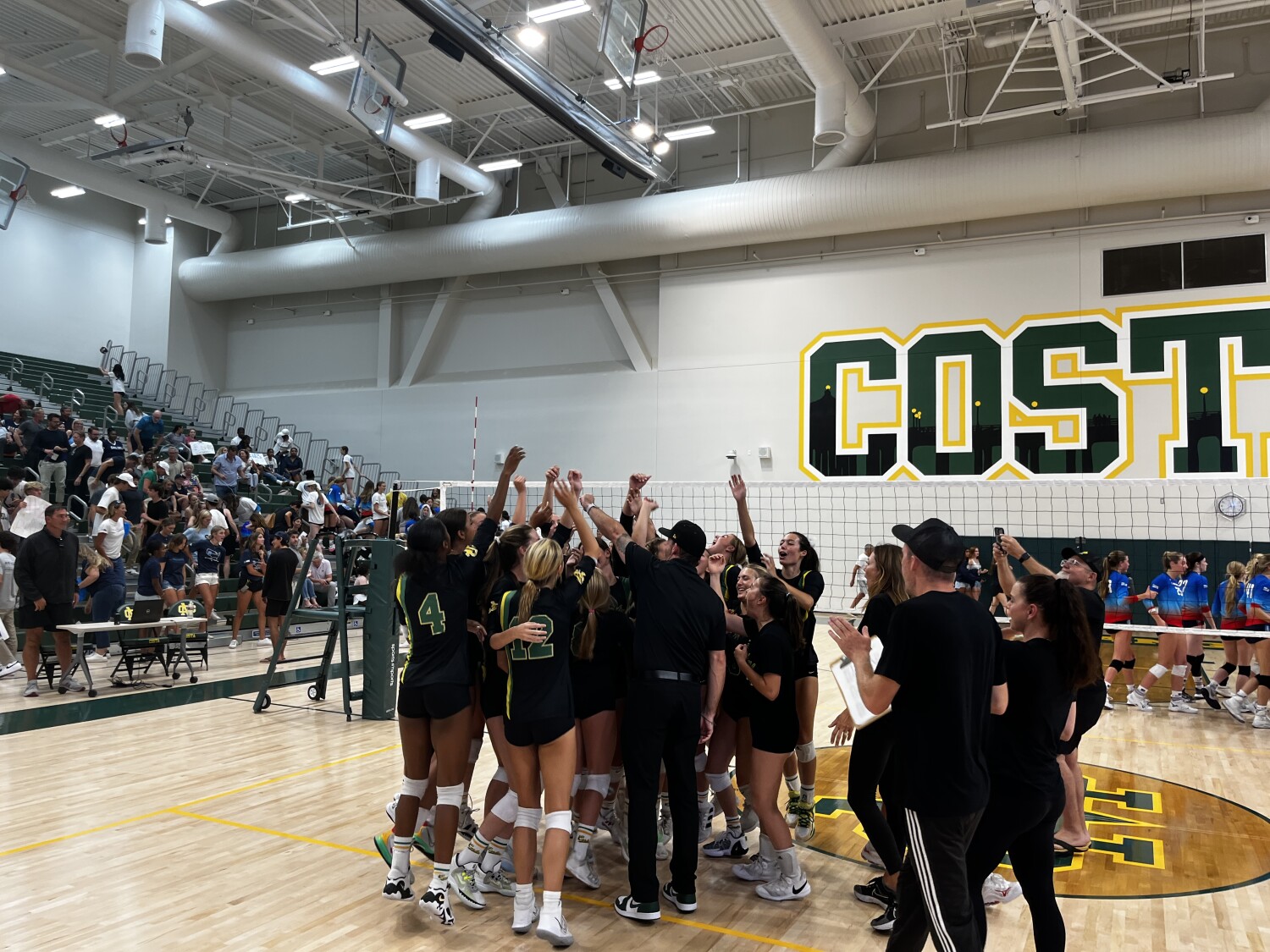 After the last point fell, they gathered to a cheer, jumping up and down and smashing some Lizzo.

It’s their theme of the season, said setter Charlie Fuerbringer — a statement of everything the Mustang seniors have worked for on a climb to the top of the Southern Section.

“About damn time,” Fürbringer said. “We are ready to win.”

They made a big move Thursday night with a 3-0 (25-16, 25-21, 25-18) win over Marymount, a program that hadn’t lost a game in nearly three years. The Mustangs kept them off balance from the start, Fuerbringer played with positioning the Sailors defense like a jazz musician by setting underdog Drew Wright on monster kills.

In the first set, at 9-2, Marymount’s outside hitter Torrey Stafford jumped for a swing that would end most. But Fürbringer skimmed the net, grabbed Stafford’s hit and stuck her tongue back to the ground with a slight grin.

“Last year it was lucky if we beat them,” Wright said of Marymount, the nation’s best team last season. “That year we felt like we knew what they were doing and we knew exactly how to beat them.”

It was the first time they defeated Marymount in his five-year tenure, head coach Cam Green said. They’d see her again later in the year, Green grinned – but for the night, for a team that wants it all, they’d take it.

“They feel they have a good chance,” Green said of the Mustangs. “They understand this league and this section is full of really good teams but they believe they are one of the best.”

Don’t watch a movie. Don’t talk about it. Huntington Beach coach Craig Pazanti wanted to continue as soon as possible after the 3-0 defeat on Thursday evening (25:21, 25:14, 25:16) against Santa Ana Mater Dei.

“It was the first time I saw what we look like – I don’t want to use the word fear, but I just didn’t see the confidence we’ve played with all year,” Pazanti said.

At the start of the game, Huntington Beach was the Southern Section’s highest-ranked team in the CIF state rankings, 7-0. Mater Dei was only 2-2, losing to Lakewood and Redondo Union back-to-back. The Oilers had beaten Lakewood 3-1 earlier in the year; Mater Dei lost to them 3-1.

But the Monarchs fared better than Pazanti had seen all year, he said. In a season’s slugfest, it was just further proof that, Pazanti added, any of the top eight teams could knock each other out on any given night.

Timme’s 22 lead No. 2 Zags past Spartans on carrier deck