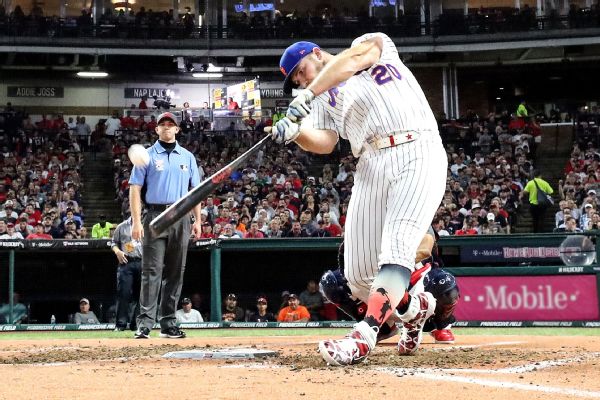 LOS ANGELES — Pete Alonso was at the Visitors’ Clubhouse at Truist Park in Atlanta last week when an attendant made a puzzling request: Would the New York Mets hitter take a call from Atlanta Braves skipper Brian Snitker?

“Why is the opposing manager calling me?” Alonso remembered thinking.

He found out quickly. Snitker was preparing to lead the National League All-Star roster and had a major question based on a first-time, fan-friendly rule change.

If the score were tied after nine innings of Tuesday night’s All-Star game at Dodger Stadium, Snitker asked, would Alonso be in the new home run tie derby that would decide the winning team?

“I’ll be your guy,” Alonso recalled after telling him. “I think it’s fun. I think it will be a great event when that happens.”

Alonso was unaware of the novel format, in which three players from each league would each take three swings to determine the final score. He wasn’t the only one who found out what might be on deck.

“Would that actually happen?” Yankees hitter Giancarlo Stanton said. “That’s new to me.”

Because the home run derby is always popular the night before the game, Major League Baseball decided to make a slugging showcase a part of the Midsummer Classic.

And no doubt many fans will now be cheering for a tie just to see another long ball launch.

“Are they doing that? That would be fun,” said Dodgers first baseman Freddie Freeman. “We have Pete Alonso and Ronald so I like our chances.”

The provision that paved the way for innovation was buried in Schedule 13 of the MLB that governed the March 10 MLB lockout.

Alonso has 24 homers, third in the NL, and had won the Home Run Derby back-to-back before entering the contest on Monday.

Play would be briefly halted after the ninth inning “to allow the ground crew to reconfigure the field in an arrangement suitable for the tiebreaker.”

In the tiebreak, “each player may take an unlimited number of pitches without counting against their overall swing. Players on each team may bat in any order during the All-Star Tiebreak, provided, however, that each team’s batters alternate. “

As a visiting team, the AL would send a batsman to bat first, and players from each league would take turns.

“Once all six tiebreaker selections have completed their swings, the team with the most homers is declared the winner of the All-Star Game,” the rules read. “In the event that the teams have the same number of home runs after the tiebreaker, each manager will select a tiebreaker selection to enter another round where each team’s tiebreaker selection needs three swings to break the tie.” break. The head-to-head format mentioned above will continue until the tie is broken.”

The three batters selected by a league for the tiebreaker cannot be replaced unless injured or to protect player health.

The All-Star Game has played 13 extra innings since its inception in 1933. The last two times it was 10 innings, in Miami 2017 and Washington 2018. Teams running out of pitchers have become a problem as managers try to get most pitchers in play by the ninth inning, and the 2002 Milwaukee game ended in a 7-7 tie after 11 innings when none available pitchers were left.

A few years ago, MLB wanted to try the automatic runner on second base when the All-Star game went into extra innings.

Thanks to Snitker, Alonso was ready for a new way to decide who wins the All-Star Game.

“He had to tell me about the home run derby stuff because I didn’t know about it,” Alonso said.

https://www.espn.com/mlb/story/_/id/34264386/all-star-game-decided-home-run-derby-tied-9-innings MLB All-Star Game to be decided by home run derby if tied after 9 innings

Tahoe National Forest hiker found by his own dog

TE George Kittle out for 2nd straight game for 49ers