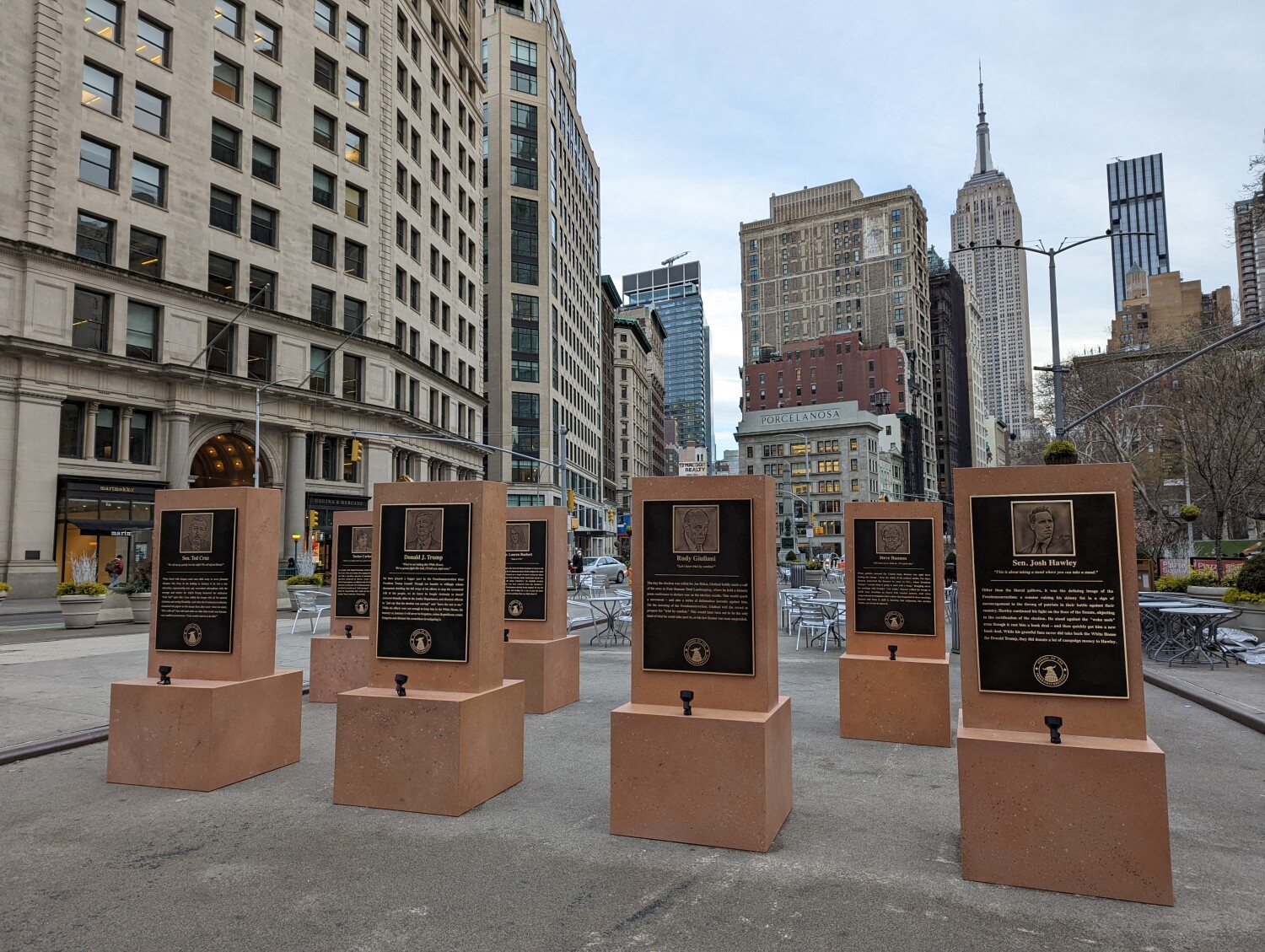 On the morning of January 6, 2022, a series of mysterious monuments appeared in Flatiron Plaza in New York City. By 11 p.m. that evening, they were gone.

Now these monuments are making their way to Los Angeles.

To commemorate the one-year anniversary of the US Capitol Siege, mock memorials titled “Heroes of the Freedomsurrection” were created by The Daily Show With Trevor Noah team exhibited in New York on 23rd Street and Broadway, just half a mile from the Empire State Building.

Eight bronze plaques lined the path as passers-by examined the displays, leaving items such as photos and flowers on them to satirically commemorate the efforts of key figures such as former President Donald J. Trump, Rep. Marjorie Taylor Greene (R-Ga.) and Tucker Carlson, Fox News political commentator, at the January 6 riot in the Capitol.

The description for the mock-uments reads: “‘Heroes of the Freedomsurrection’ honors eight of the patriots who tried – and failed miserably – to overthrow their country on January 6, 2021.”

“Because America loves monuments so much, this was kind of our way of paying tribute to the ‘Heroes of the Freedomsurrection,’ the people who essentially made this day possible,” says Jocelyn Conn, producer of The Daily Show. .

These plaques were flown nationwide to Los Angeles, where they are on display at Westfield Century City’s Nordstrom Plaza through June 5. “Heroes of the Freedomsurrection” returns just before the House Committee is scheduled to hold a January 6 public hearing on the January 9 siege.

On January 6, 2021, the Capitol was stormed by Trump supporters believing false allegations of voter fraud. Aiming to overthrow the election, the rioters broke into the Capitol where the electoral votes for the 2020 presidential election were being tallied.

On the day news of the Capitol riot broke, Conn had a feeling it wasn’t real. She found it difficult to comprehend the chaos and wondered, “Did this really happen?”

“I think there wasn’t really any certainty that the institution would last,” adds Ramin Hedayati, digital supervising producer and segment director for The Daily Show. “That, I think, was scary for me. The fact that they were so close probably gave them enough confidence to do it again.”

Each plaque contains a photograph, the recruit’s name, and a quote from the individual, followed by a description of their role in maintaining the siege.

Cruz’s plaque reads, “Some men flee to more comfortable climates when faced with danger. Not Cruz. In preparation for January 6, he was a star attraction, spitting into any convenient microphone with the courage and determination for which Trump nicknamed him ‘Lion Ted.’

The plaque continues: “…When the Freedom Surrectionists ransacked his papers in the Senate, they knew where he stood: ‘He is with us!’ They told each other on video, which would soon become very useful for prosecutors. ‘Cruz would want us to do that!’”

“News continues to circulate about January 6th and the investigation. And since January 6 of this year, other news has emerged that shed more light on new numbers,” says Conn.

Text message and email logs obtained by the Jan. 6 committee show Meadows’ involvement in the fiasco, including his efforts to help Trump attempt to overthrow the presidential election.

Gaetz was an ardent defender of the January 6 siege. On the anniversary of the uprising, Bannon’s War Room Podcast, said Gaetz: “We are not ashamed of anything. … We are proud of the work we did on January 6 to make legitimate arguments for the integrity of the election … and we will indeed step onto the grounds where patriotic Americans walked from the White House to the Capitol.”

The idea for the monument succession piggybacks joins the debate over whether Confederate statues should be taken down. Some argue that these statues must be maintained to “preserve our history,” while others believe these memorials are powerful reminders of America’s deep-rooted history of slavery and racism.

The “Heroes of the Freedomsurrection” ad reads tongue-in-cheek, “Please don’t tear down these monuments, for history.”

“I think there’s a lot of effort going on to erase that story. They would love for that to go away,” says Hedayati. “So we see these memorials as an attempt to remind people, ‘Hey, this happened. It was a big deal. We haven’t forgotten.’”

https://www.latimes.com/entertainment-arts/story/2022-06-03/heroes-of-the-freedomsurrection-los-angeles-daily-show-trevor-noah-new-york Mock ‘Heroes of the Freedomsurrection’ monument arrives in L.A.

Mary Moss is paving the way for Lakewood - Harborstone Heroes

Grammys 2023 Predictions: Who Will Win, Who Should Win?