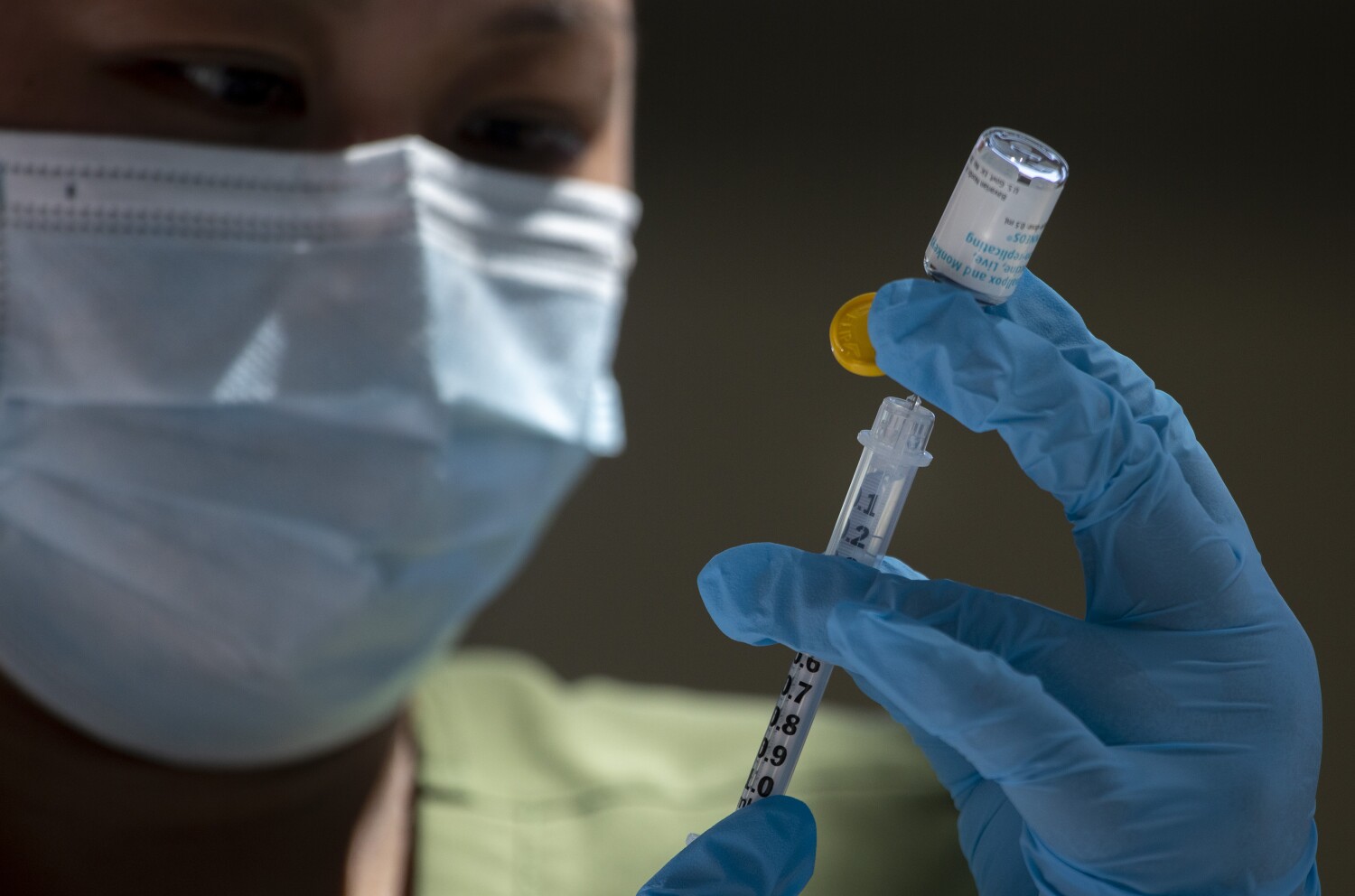 New cases of monkeypox are beginning to level off in Los Angeles County, mirroring a trend seen elsewhere, as more vaccine doses are distributed and some people reduce riskier sexual activity.

As of Thursday, LA County reported 1,349 cumulative cases of monkeypox, up 30% from 1,036 cases the previous Thursday.

The latest increase is much smaller than in previous weeks: between August 4 and August 11 there was a 62% increase in cumulative cases, from 478 to 779. The previous week-on-week increase increased by 71%.

“Although a month ago we saw a doubling of monkeypox cases in just nine days, we are now seeing a leveling off in the number of new cases per week. And our doubling time has increased to 16 days,” said Dr. Rita Singhal, Chief Medical Officer of the LA County Department of Public Health.

“This may be an early sign that transmission is slowing down. Similar trends are noted in countries where the outbreak first started and in other jurisdictions in the United States,” Singhal said.

As of Thursday, there were 16,603 cumulative monkeypox cases nationwide, a 23% increase on the week, but that’s more modest than the previous 30% change on the week.

There are a few possible factors for the apparent slowdown in cases. Monkeypox requires prolonged close contact to spread — typically close skin-to-skin contact — and isn’t nearly as transmissible as the coronavirus.

“When you have such an infectious agent, it becomes what we call ‘burn-out’ faster when it’s in a community or among a group of people,” Singhal said during a briefing on Thursday.

The disease is characterized by virus-filled rashes and lesions that can appear like pimples, bumps, or blisters. It can first appear in the genital area and rectum before spreading to other parts of the body, and since the rashes can be mistaken for other skin problems, the virus can spread easily during intimate encounters. The risk is higher for people with multiple sex partners.

Behavioral changes among those who are at higher risk for monkeypox may also have played a role, she said, as could the continued rollout of vaccines. Singhal said federal survey data suggest gay and bisexual men are reducing riskier sexual activities amid the outbreak.

“We are cautiously optimistic that this will be real and will last,” Singhal said. “I can say for us here in LA County it’s a leveling. I wouldn’t say it’s going down any more.”

During Thursday’s press conference, Troy Masters – publisher of the Los Angeles Blade, an LGBTQ newspaper – said another factor could play a role.

“A lot of people have stopped reporting their illness because it’s mild,” Masters said. “I know that from many friends. You keep an eye on it. If it gets out of control, contact your doctor.”

But even mild cases should be reported because it better empowers public health officials to stop further spread, Dr. Muntu Davis, the county health officer.

“It’s really helpful to think not just about the disease you have, but also about the others who may have been infected and who could potentially be prevented from catching an illness through vaccination, and to help us as a community to really stop the transmission of this disease,” he said.

According to the latest available figures, more than 3,000 probable or confirmed cases of monkeypox have been reported nationwide. The majority of these were in LA County and San Francisco, but San Diego, Alameda, Riverside, Santa Clara, Sacramento and Orange counties have all reported at least 100 cases.

“We ask those at high risk to be cautious with their partners and to have any signs of monkeypox evaluated by a doctor right away,” said Dr. San Diego County Public Health Officer Wilma Wooten in a statement this week.

Orange County Health Officials this week confirmed the county’s first case of monkeypox in a child, a rare occurrence even though the virus continues to spread nationwide.

There have been at least five other cases of monkeypox in teenagers in California. Still, the juvenile diseases account for only about 2% of the state’s total monkeypox cases.

“Please remember that monkeypox is very uncommon in children,” said Dr. Regina Chinsio-Kwong, Orange County Health Officer. “It’s important to note that many childhood illnesses can cause skin rashes. If you or your children develop a new or unusual skin rash, please follow the preventative advice and seek medical attention from a qualified healthcare professional for further recommendations.”

In LA County, the median age of people with confirmed cases of monkeypox remains 35 years. While 47 people have been hospitalized with the disease, no one has died in the United States, Singhal said. Globally, five deaths have been attributed to monkeypox in countries that had no history of monkeypox prior to this outbreak.

“Although we continue to see cases of monkeypox, the risk of monkeypox infection in the general population in Los Angeles County remains very low,” Singhal said.

There have been six reported cases of monkeypox in Los Angeles County in communities such as homeless shelters and prisons.

As of Friday, 46% of cases for which geographic information is available were reported in the health care planning area, which covers a central portion of the county — a strip home to about 12% of the county’s residents and West Hollywood, Hollywood, Downtown Los Angeles, Eagle Rock, Highland Park, Echo Park, Silver Lake, Los Feliz and Boyle Heights.

The supply of vaccines has increased significantly in recent times. As of recently, LA County had received more than 72,000 doses of the Jynneos vaccine. The county has distributed all doses to vaccine providers, and more than 48,000 doses have been administered.

Additionally, LA County has just received more than 40,000 doses of vaccine, Singhal said. Another 80,000 doses were allocated to LA County.

Once these 120,000 additional doses are fully received, Singhal estimates that LA County will be able to fully vaccinate nearly 100,000 residents with the two-dose vaccine series. That equates to about 56% of LA County’s estimated 180,000 residents who are at higher risk of monkeypox infection, Singhal said.

Column: Marking the 10th anniversary of my death