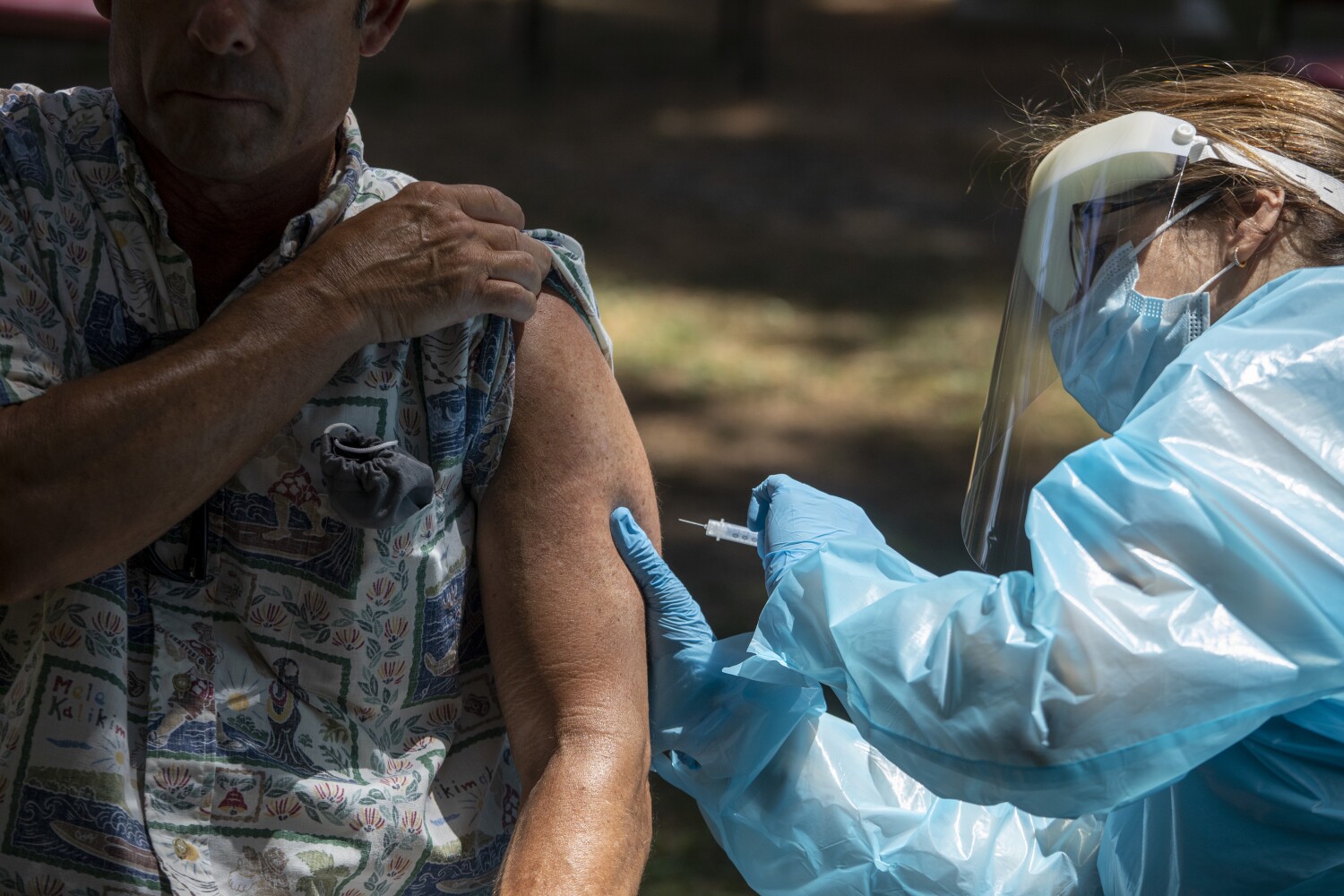 Monkeypox cases are rising exponentially in some gay and bisexual communities, daunting hopes that officials can quickly gain control of the virus, which has the potential to take a permanent hold in the United States.

According to Our World in Data, the U.S. is reporting about 444 monkeypox cases daily for the seven days ended Monday. That’s double the daily fall rate of two weeks earlier. Los Angeles County reported 683 cases Tuesday — a number that has doubled over the past 10 days.

More than 1,600 cases of monkeypox have been documented in California, according to a Times count of data from LA and San Francisco counties and the state Department of Public Health.

“If you look at the rates of increase, you can see that it’s really approaching an exponential curve. And unfortunately, as these numbers get higher, it’s getting harder and harder to control,” said Dr. Peter Chin-Hong, infectious disease expert at UC San Francisco.

Doctors worry that increased spread could cause the virus to become endemic in wildlife populations, meaning it would be virtually impossible to eliminate it as a new disease of concern in the US

“Hopefully we can contain that. But if not, it can spread to other populations,” Chin-Hong said.

About 10% of monkeypox cases result in hospitalization, Chin-Hong said, usually because of severe pain or a superinfection. “There were a couple of deaths in Spain, one in Brazil, outside of the African continent,” Chin-Hong said.

And “although we don’t see a lot of deaths,” Chin-Hong said, monkeypox infections cause “really a lot of suffering.” The pain can be unbearable and cause patients to have trouble sleeping, walking, eating, drinking, or going to the toilet.

Here are some challenges in fighting the global outbreak:

The spread of monkeypox cases has also been amplified by Pride events, particularly at gay saunas and pool parties where intimate skin-to-skin contact occurs, Chin-Hong said. The virus is not transmitted through pool water or public surfaces in general. However, it can be transmitted through infected bed sheets and other surfaces in the home where there is continuous exposure.

Monkeypox can be difficult for medical professionals to diagnose early, especially since it was virtually unknown in the United States until recently.

“The rash can look really innocent when it starts, like a pimple or like an ingrown hair. So that’s really why it’s really difficult for clinicians to diagnose it,” Chin-Hong said. “If you can diagnose people, you can keep them away from people [who] are not infected.”

Chin-Hong urged clinicians to be more suspicious and take samples of lesions for testing. Even if there aren’t many skin conditions, clinicians should take samples to test for monkeypox in the rectum, urethra and mouth, he added.

For example, a person infected with monkeypox may test positive for the virus from a sample taken from the urethra, but the infection may not be detectable on the skin.

Monkeypox symptoms typically begin within three weeks of exposure, according to the Centers for Disease Control and Prevention. The illness can last two to four weeks.

About 80% have flu symptoms, but about 20% don’t, Chin-Hong said. The telltale rash occurs in nearly all monkeypox patients; among many, it first appears in the anus and genital regions, and then moves toward the face, arms, mouth, trunk, palms, and soles.

San Francisco resident David Watson said he contracted the virus after hugging and kissing a friend on the cheek. His friend had a lesion on his cheek which he assumed was an ingrown hair or pimple. Within five days, Watson had developed symptoms that became so painful that he went to the hospital.

“I ended up in the ER three times over the course of 4½ days in excruciating pain opioids could barely touch. The first time I was hospitalized, it took two doses of morphine to bring the pain down to a manageable level,” he said. “Whether I was sitting, standing or lying down, the pain was immeasurable.”

Federal officials have been criticized for moving too slowly to increase the number of vaccines, but on Tuesday they announced a new plan to expand limited supplies of the Jynneos vaccine, which can help protect against monkeypox. The plan calls for reducing the dose of the vaccine to one-fifth of the current measurement by administering the shot intradermally — between layers of skin — rather than subcutaneously into the fat below.

“We’ll probably still run out of vaccines before we run out of guns,” said Dr. Demetre Daskalakis, the deputy national coordinator for the White House response to monkeypox, at a briefing Tuesday.

Health officials say having an adequate supply of vaccines is vital to controlling the monkeypox outbreak.

“Each week you wait, more and more people infect a circle around them. And these circles around them are infecting circles around each one of them,” Chin-Hong said, adding, “We treated so many patients this week, a lot more than in previous weeks.”

“I think vaccines are the way out,” he said. “And monkeypox in the beginning…it doesn’t look like anything, like a pimple. It is really difficult to clinically diagnose early cases. So by the time it gets dramatic, you’ve probably exposed a lot of people already.”

Kim Saruwatari, director of public health at UC Riverside Health Systems, said there is a particular need for additional vaccines in the Coachella Valley due to international sex tourism in Palm Springs.

“There are 11 sex clubs in this area — the largest number in any Southern California jurisdiction,” Saruwatari said during a lawmakers’ hearing on Tuesday. “For that reason, Palm Springs could be the source of many cases in other jurisdictions.”

It has been difficult to balance messages that don’t stigmatize gay and bisexual men and transgender people who have sex with men – those most likely to be infected with monkeypox – while providing clear ways to reduce the risk of contracting the virus reduce.

“I think it’s hard to say, ‘Limit sexual activity or not have sex,’ because you want to be as sex-positive as possible,” Chin-Hong said. “But I think those are the messages that some people are starting to see.”

The San Francisco AIDS Foundation has suggested “skipping the dark back rooms at parties when they’re very crowded and there’s no way to control who you bump into and rub skin against skin.” People can also reduce risk by having “open and honest conversations about monkeypox symptoms and possible exposures” before having sex.

“It might be time to give up group sex and saunas until we all get vaccine one and two. This is temporary and for the love of group sex and those who enjoy it,” read another safe sex guide.

Experts are also trying to dispel unfounded fears about how you can get monkeypox. Officials see no spread of activities like changing in a dressing room, casual contact at a crowded festival, or using gym equipment.

“Even though it’s technically possible to transmit monkeypox to surfaces [like if you share a towel with someone who has monkeypox], it is less likely. There’s not much risk of getting monkeypox from sharing things like toilet seats, pools, and gym equipment,” the San Francisco AIDS Foundation said.

There is no risk of catching monkeypox from casual, public encounters, e.g. B. when you pass someone on the subway. It would also be difficult to transmit monkeypox during a massage unless there is a visible lesion on skin-to-skin contact.

“Monkeypox risk is really in the intimate environment,” Chin-Hong said.

It’s hard to get treatment

There is an antiviral – Tecovirimat, also known as Tpoxx – that can be given to relieve symptoms. However, many healthcare providers have had difficulty accessing the drug, which is only recommended for use in severe cases or for people with certain high-risk health factors. CDC officials have said they are working to streamline the process so more people can have access to the drug.

Tpoxx — administered by three pills, twice a day for two weeks or intravenously — is approved by the U.S. Food and Drug Administration to treat smallpox in humans, but its use to treat monkeypox is not approved by the agency. As a result, getting Tpoxx is complicated and requires you to contact a state health department or the CDC and have a patient fill out a consent form, which takes an hour.

Federal officials have said they are developing randomized control trials to determine the safety and effectiveness of Tpoxx for treating monkeypox in humans. Although it has been shown to be effective in animal models of monkeypox, “without such human data, we will not know whether tecovirimate would benefit, harm, or have no effect in people with monkeypox disease,” FDA and CDC officials wrote in a perspective article for the New England Journal of Medicine.

Tracy City Council member Dan Tavares Arriola said when he tested positive for monkeypox in late July, he faced a maze of bureaucracy as he tried to get treatment for himself and a vaccine for his exposed partner.

“I’m a lawyer. I’m an elected official. I have experience representing myself and others and navigating the systems,” Arriola said. “I can only imagine how much more difficult it is for those who have these do not have experience or face other barriers such as language barriers.”

The Morning After: The 68GB SSD floating inside the James Webb Space Telescope

The Morning After: An early look at Logitech’s new gaming handheld