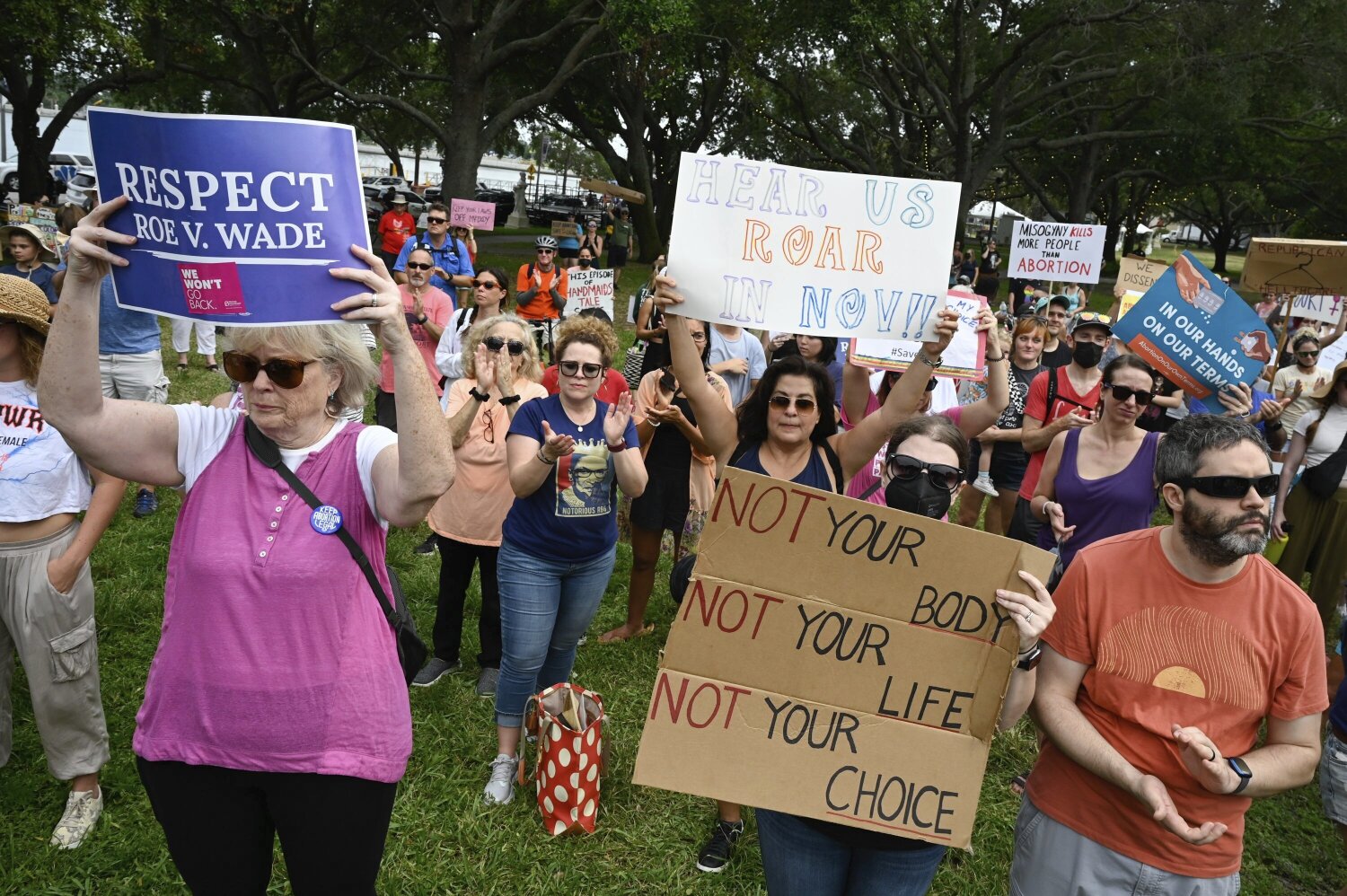 For Wendy Vargas, the recent abolition of a constitutional right to abortion — and the ban on the procedure in many Republican-controlled states — is an affront to her values ​​as a woman and an American.

“This is supposed to be a first world country,” said the 32-year-old Colombian immigrant and independent, Republican-leaning voter. “We should have more freedom here.”

But will the attack on abortion rights determine the way Vargas votes?

Both major parties are asking themselves this question in the run-up to the midterm elections in November. With a majority of voters nationwide supporting abortion rights, Democrats are making it a key issue in swing states, while Republicans hope to avoid a backlash that could dampen the “red wave” polls and pundits have been predicting.

This tension is particularly acute in Florida, where Republicans dominate the political landscape, but 56% of people believe abortion should be legal in all or most cases. Federal data shows that only New York and Illinois have higher abortion rates.

Vargas, who voted to catapult Republican Ron DeSantis to the governorship in 2018, remains undecided on whether to support his reelection bid. Her opposition to the Republican position on abortion is countered by economic problems she attributes to Democrats.

“Like inflation,” said Vargas, who runs a cell phone store. “How crazy the prices are on everything. Everything is going up.”

DeSantis and the Republican-controlled Florida legislature have been more cautious than their counterparts in Louisiana, Mississippi, South Dakota and other red states, where majorities of voters oppose abortion.

While most of those states had enacted laws banning abortions in nearly all cases after the U.S. Supreme Court struck down Roe v. Wade last month, Florida had tightened its restrictions banning abortions after 15 weeks of pregnancy — versus 24 — just none Exceptions for rape or incest.

Hours after Roe fell, DeSantis promised to “expand pro-life protections.” But he hasn’t focused on abortion, a decision political analysts say is designed to avoid alienating swing voters, who make up about a quarter of the state’s electorate.

His campaign is likely to highlight a faltering national economy, high gas prices and parental rights, as well as teaching race, sexual orientation and gender identity in schools — issues that have fueled support for Republicans nationally. Florida voter registration records show that the state’s Democratic voter base fell by nearly 100,000 in the first five months of this year.

“Abortion is not a high-profile issue,” said Steve Vancore, a pollster who owns Clearview Research in Tallahassee and is a Democrat. “Ron DeSantis will win in a landslide victory.”

Historically, single-issue abortion voters tended to be those who opposed it. Democrats hope to change that now that abortion is no longer a constitutionally protected right.

“I believe we will mobilize and work to bring the pro-choice Democrats back into the Senate to stop this policy,” said Florida State Senator Lauren Book, the minority leader. “Because Roe was knocked over, we know it’s going to be left up to the states. And that’s how we do business here.”

“If you care not only about abortion rights, but about all of our collective freedoms, you need to get involved now and help us build long-term political power,” she said.

Though DeSantis hasn’t pushed for an outright abortion ban, Democrats warn that he is planning to do just that to solidify the national Republican base while eyeing the party’s nomination for the 2024 presidential race.

“We’re ringing the alarm bells,” Eskamani said. “If Governor DeSantis is re-elected, abortion will be outlawed for good. No question.”

Such messages are aimed primarily at young voters who do not typically vote in midterm elections but are most at stake when it comes to abortion.

Thousands of protesters, most of them young, took to the streets of Orlando last week holding up signs that read, “Stop women” and “God gives me the freedom to choose.” Why can not you?”

“If you don’t vote, shut yourself up,” said one of the protesters, Melanie Ramos, a 22-year-old call center worker for Disney who was raised in a traditional Christian family in Miami and was taught that abortion is as in.

“I definitely feel like Florida is going to be one of those traditional Southern states where everything is taken away from women,” she said. “I’m scared of what they’re going to do in the end.”

In interviews, some women who have paid little attention to politics said they were troubled by the prospect of losing long-held abortion rights.

“It came out of nowhere,” said Vaneza Lebron, a 30-year-old paralegal from the town of Kissimmee, south of Orlando. “It’s an attack on women and a step backwards for women. They control what we can do with our own bodies.”

Lebron, who had an abortion when she was 25 because she felt her then-boyfriend was unwilling to help raise a child, said she votes in presidential elections but has usually skipped midterms.

Now she feels motivated to vote against DeSantis and other Republicans in November. But she was concerned that some of her closest friends, and even her mother, seem unmoved.

“It’s just crazy that people don’t take this seriously,” she said. “Will there be a pushback?”

Lebron’s parents hail from Puerto Rico and Mexico — and are part of a growing Latino presence that includes recent waves of immigrants from Colombia, Venezuela and the Dominican Republic.

Latino voters, who make up 18% of voters nationally, have traditionally favored Democrats, but that support has dwindled, electing enough Republicans in 2020 to help Donald Trump win Florida. Republicans see them as natural allies on culture war issues, including abortion.

Maria Gonzalez, 33, a Venezuelan nurse, told her pastor at Sts. Peter and Paul Catholic Church north of Orlando celebrated the Supreme Court ruling as God’s will.

“We vote based on our faith,” said the mother of two. “We tend to be very conservative. If you ask any non-Generation Z, they will all be for this governor and government because of our beliefs.

“If you want an abortion, go to California,” she said.

Alluding to the appeal of churches to many Latino voters, DeSantis signed the 15-week abortion law into law in April in Nación de Fe, an evangelical congregation in Kissimmee.

But Latino abortion rights activists are now trying to refine a new message to reach the younger generation.

“You’re not a slave to patriarchy or machismo, you’re not even a slave to the church,” said Nancy Rosado, 66, a clinical social worker. “You have free will to make your own decisions. God gave you that.”

“My grandmother, bless her, doesn’t know how to talk about abortion policies, but she is very aware that someone should not be forced to remain pregnant against their will,” Piñeiro said. “She won’t be protesting out there on the streets, but if someone she loves needs an abortion, she will support them.”

Piñeiro said that when she was a teenager, her father drove her to have an abortion, but on the way home he lectured her that she had to close her legs.

Still, she said the best hope for restoring abortion rights across the country is for federal legislation to be passed while Democrats still control Congress because she doesn’t see much chance of defeating Republicans in the next election.

“Right-wing fundamentalism and white supremacy aren’t going away, they’re not going away with voting,” she said, arguing that abortion restrictions hurt minorities the most. “I don’t mean to be gloomy, but I’m not holding my breath. There is so much raging in the United States.”

The political calculus has emboldened Florida’s anti-abortion activists. Florida Voice for the Unborn executive director Andrew Shirvell said that after speaking with a senior member of the DeSantis office, he was confident the governor would call a special session to pass a near-total abortion ban before the end of the year.

“I don’t think the Democrats will have anything to say,” he said. “Florida will end up being one of the top pro-life states in the country.”

https://www.latimes.com/world-nation/story/2022-07-06/more-than-half-of-floridians-oppose-abortion-restrictions-will-they-push-back-at-the-polls More than half of Floridians oppose abortion bans. Will they push back at the polls?

90 Day Fiancé: Mohamed Abdelhamed Opens Up About "BIG" Sacrifices To Be With Yvette Arellano In the US

Disneyland annual pass holders can renew soon — for a price

Calmes: Bill Barr too late in telling the truth about Trump