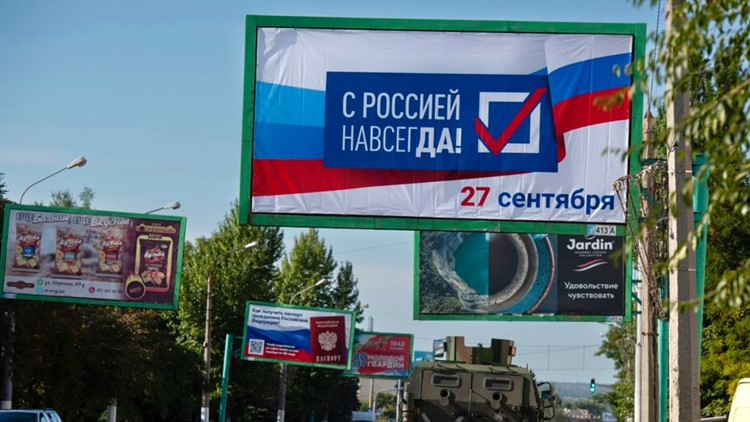 The Kremlin-orchestrated referendums were widely denounced by Ukraine and the West as a sham without legal force and viewed as a step towards annexation.

Kyiv, Ukraine — Voting on referendums to become part of Russia began in Moscow-controlled regions of Ukraine on Friday, Russian-backed officials there said.

The Kremlin-orchestrated referenda, widely denounced by Ukraine and the West as a sham without legal force, are seen as a step towards Russia’s annexation of the territories.

Voting will take place in the partially Russian-controlled regions of Zaporizhia and Donetsk. Also in Kherson, which is almost completely controlled by Moscow, the election should start on Friday morning.

The vote, in which residents will be asked whether their regions should become part of Russia, will certainly go in Moscow’s direction. That would give Russia an excuse to claim that attempts by Ukrainian forces to regain control are attacks on Russia itself, dramatically escalating the seven-month-old conflict.

The referendums follow President Vladimir Putin’s order for a partial mobilization that could increase the fighting by about 300,000 Russian soldiers.

Voting will continue for five days – until Tuesday next week. According to officials deployed by Russia in the occupied territories, citing security reasons, election officials will take ballots to people’s homes and set up makeshift polling stations near residential buildings during the first four days. Tuesday is the only day voters are invited to the regular elections.

Polling stations have also been opened in Russia where refugees from the occupied territories can cast their votes.

Denis Pushilin, a separatist leader of the Moscow-backed authorities in the Donetsk region, called Friday’s referendum “a historic milestone”.

https://www.king5.com/article/news/nation-world/ukraine-russia-referendums/507-54050f07-1804-43f7-bbde-6dd5bde1df3a Moscow-held regions of Ukraine vote whether to join Russia