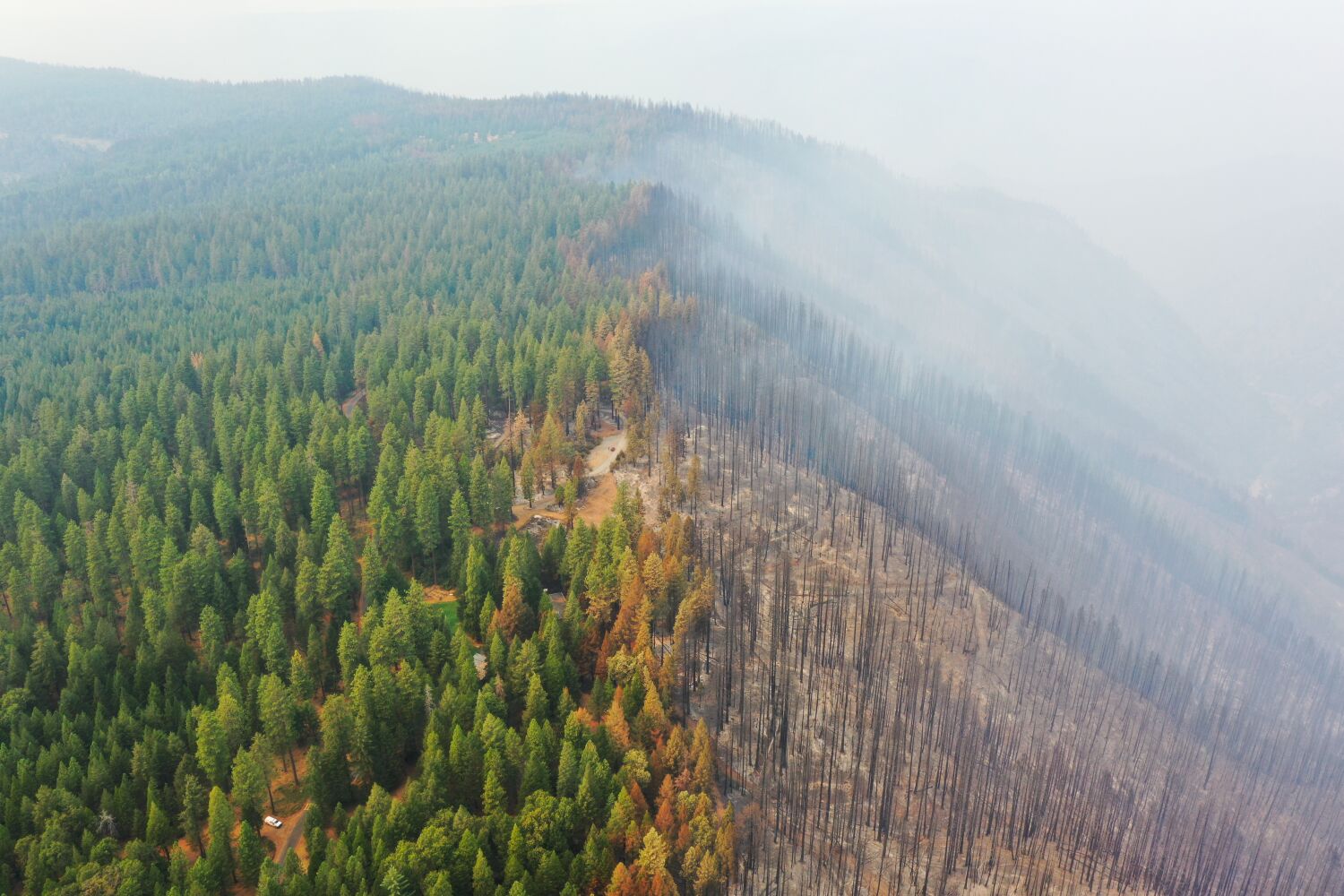 Firefighters continued to make progress on a 50,000-acre blaze in Placer and El Dorado counties on Tuesday, but shifting winds and “critically dry fuel” prompted increased activity in the fire area, firefighters said, as a new wildfire broke out in the north.

The mosquito fire was 25% contained Tuesday night and grew 569 acres compared to this morning — from 49,761 acres to 50,330 acres, according to the California Department of Forestry and Fire Protection.

Jonathan Pangburn, a fire behavior analyst at the agency, said the area’s extremely dry scrub and trees – what he called “record-breaking fuels” and “historically dry fuels” – would burn easily if winds picked up over the wildfire .

On Tuesday night, firefighters noted that slightly stronger south-easterly winds broke up a smoke inversion as warm air trapped smoke and cooler air underneath, which dissipated by midday and resulted in significantly increased fire activity as available oxygen levels in the area rose.

A point fire jumped across the Middle Fork of the American River Tuesday afternoon in the Pond Creek drainage at the western corner of the fire perimeter, according to Cal Fire.

“Firefighters and resources from around the fire have been diverted to hold this corner of the fire to the emergency lines set up by crews below the community over the past week,” Cal Fire officials said.

Similar weather conditions have been forecast for the next few days.

The Mosquito Fire began on September 6 amid the state’s worst September heatwave.

Meanwhile, a new fire broke out Tuesday afternoon in the community of Dutch Flat, just north of the mosquito burn area.

The Dutch fire was reported just before 1 p.m. near Interstate 80 and Ridge Road, according to Cal Fire. It was last reported Tuesday night at 30 acres and 30% containment.

The California Department of Transportation closed westbound I-80 at its intersection with Highway 20 at 2:00 p.m. As of Tuesday night, Caltrans officials had not announced when the freeway would reopen.

Ahead of Tuesday afternoon’s clearing, smoke from the mosquito fire was damaging air quality across the region, up to 100 miles north and northwest of the blaze, in communities in the northern Sierra foothills and western Nevada. The US Interagency Wildland Fire Air Quality Response Program warned of “particularly high levels of smoke” from the Mosquito Fire, particularly for Truckee, Reno and Carson City.

Much of the Reno area was affected by unhealthy air quality Tuesday morning, according to the US Air Quality Index, but air around Carson City and South Lake Tahoe had improved significantly to “good” or “moderate” levels.

Much of the area west and north-west of the mosquito fire – from Foresthill and Colfax to Grass Valley – remained at “unhealthy” or “very unhealthy” levels for air quality as of Tuesday morning.

National Weather Service meteorologist Ryan Walbrun called Tuesday a “critical day” for the fire, given the change in weather from tropical humidity in the air to some southwesterly winds.

“Much stronger winds at high altitude, not necessarily down at the surface,” Walbrun said. “What that will do is allow the fire to ventilate.”

Thousands have been forced to evacuate from these and other areas around the fire, with 46 buildings already destroyed by the fire and nearly 6,000 others threatened, Cal Fire said.

Firefighters have been able to steadily increase containment in recent days, with nearly 2,400 crew members assigned to wildfire.

“One could describe the fire activity as minimal [last night]said Don Fregulia, a US Forest Service official who led the fire department’s nighttime response. “However, last night’s work was intense and there was a lot going on.”

World markets down after US inflation report

Op-Ed: The monumental mortality of sequoias