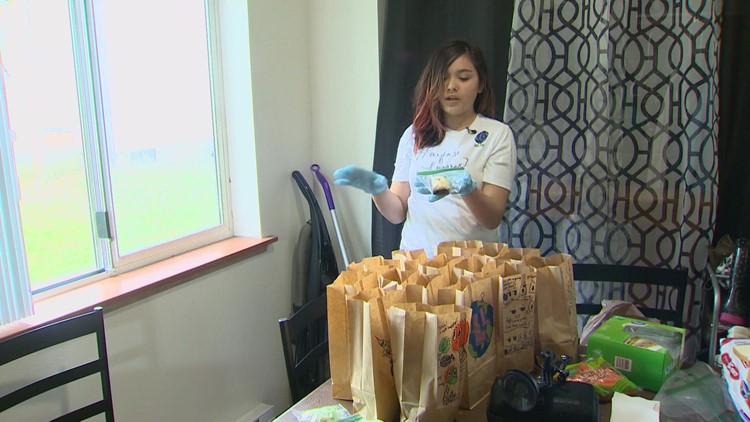 The 12-year-old created Layla’s Lunches to feed the homeless after being inspired by strangers helping her family.

“I want to change the world for the better,” she said.

In March, Layla’s apartment caught fire. Her family lost almost everything they owned.

“They didn’t even have a toothbrush,” Geri said.

But friends, family, and even complete strangers donated clothing, furniture, and other items to help the family get through the hardship.

“They didn’t really have to do that, but they did it from the bottom of their hearts, and that kind of inspired this whole thing,” Layla said.

Every day, she and her family distribute 10 to 20 box lunches to those in need in the Mount Vernon area.

She helps strangers because others have done it for her.

Now people across town know Layla and the good work she does.

“It’s the best feeling ever to know that your granddaughter has touched someone she has never met in her life,” Geri said. “I’m very proud.”

But Layla’s compassion comes at a price.

The family spends about $100 a week on lunch supplies, with food prices constantly increasing.

When members of Mount Vernon’s motorcycle community heard about Layla’s project, they roared to her side.

They have raised more than $1,000 over the past two weeks to provide grocery gift cards for the 12-year-old’s cause.

“We were all so touched by what she did after tragedy that we helped her raise funds so a suffering family wouldn’t have to use their money,” said biker and organizer Cecil Fifer.

From Tragedy to Triumph. Gratitude manifests even more gratitude.

And all Layla asks in return is that others follow her example and also give to the less fortunate in their communities.

“I want this to become a normal, regular thing to do, to give out food to the homeless,” she said.

“We would love to see people in other cities and other counties do this,” Geri added. “I hope that one day we can say that 10,000 lunches were served today. That’s what this is about.”