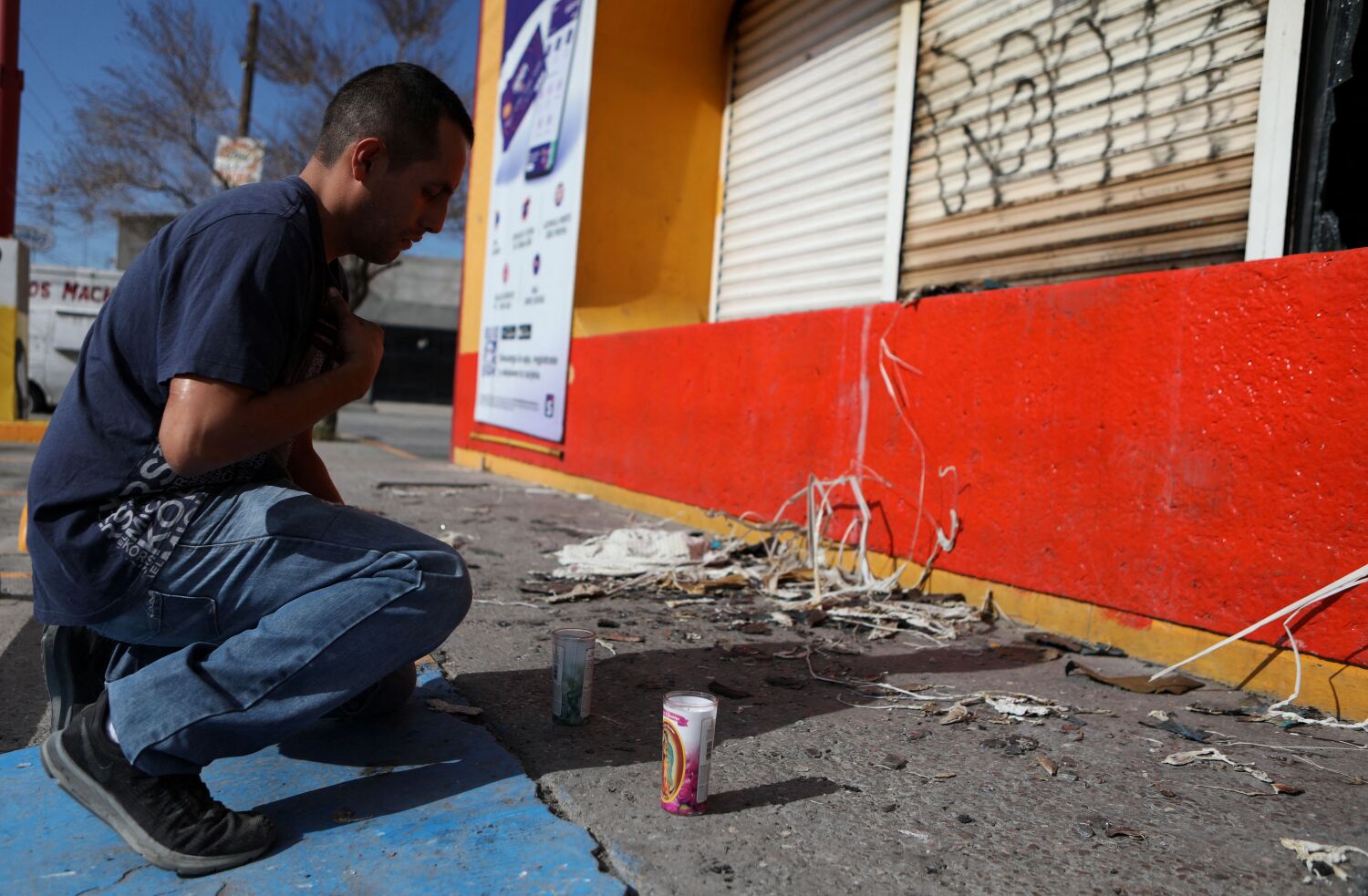 Dramatic bouts of violence and chaos in two regions of Mexico this week have left at least 12 dead and dozens of businesses torched, dramatizing the ability of crime gangs to wreak havoc and shatter semblance of normalcy almost anywhere in the country without warning.

Hundreds of Mexican troops were deployed to the northern border city of Ciudad Juárez on Friday to increase security after a series of seemingly random gang attacks took place across the city on Thursday and early Friday that left at least 11 dead — including a popular radio personality and three of his associates, and two inmates shot in a prison riot. Attackers armed with guns and Molotov cocktails targeted grocery stores, gas stations, a pizzeria and vehicles.

The killings, across the Rio Grande from El Paso, came days after roving gangs of criminals set fire to dozens of businesses, buses and cars hundreds of miles away in the south and set up roadblocks on major thoroughfares in much of the states of Jalisco and Guanajuato. Among the locations attacked were about two dozen branches of Oxxo, a nationwide chain of fast food and convenience stores. Authorities reported one death.

The dramatic events in different parts of the country appeared to be unrelated: officials said the bloody prison riot in Juárez sparked retaliation there, while authorities blamed the chaos in Jalisco and Guanajuato on cartel leaders who are outraged at plans to arrest them were.

The episodes underscored the ability of Mexico’s billionaire criminal underground – armed with powerful weaponry and abounding in cash from drug deals, extortion rings, migrant smuggling and other thugs – to cause riots.

Even many Mexicans used to rampant lawlessness were stunned by this week’s anarchic images from Juárez and outside of Guadalajara, Mexico’s second most populous city in the state of Jalisco.

“The Mexican state has been overrun and can no longer protect its citizens,” tweeted Adrián López, director of the Noroeste newspaper.

The deaths of civilians in Juárez struck many as particularly shocking in a country where people are used to gang killings of rival mobsters, politicians, journalists and others whose work or activism puts them in the crosshairs of criminals.

A common belief in Mexico — albeit of questionable validity — is that people can remain relatively safe by going about their business while avoiding the criminal element. In his regular press conference on Friday morning, President Andrés Manuel López Obrador classified the attacks on people not linked to crime as an extraordinary event.

“This is something that hasn’t shown up before and hopefully won’t be repeated because they attacked civilians, innocents, as some kind of retaliation,” López Obrador told reporters on Friday. “It wasn’t just a clash between two groups, but they started shooting at civilians. … That is the most deplorable part of it.”

In fact, the killings of “innocents” have long been a by-product of Mexico’s decades-long drug conflict. Many became collateral victims – killed, for example, in gang massacres against rivals in bars, restaurants, homes and other places.

“Random acts of violence create chaos and fear, allowing you to gain a tactical advantage over authorities and your rivals,” said Alejandro Hope, a Mexican security analyst.

Perhaps most notorious was the 2008 grenade attack on a crowd gathered in a main square to celebrate Mexico’s Independence Day in downtown Morelia. At least eight were killed and more than 100 injured in one of the pivotal attacks by traffickers in the early days of Mexico’s so-called War on Drugs.

Juárez, strategically located on a key cross-border smuggling corridor, has long been a hub of mob chaos, a place where thugs hung the bodies of slain rivals from bridges or dumped their decapitated bodies on vacant lots. The so-called birthday party massacre in 2010 left 14 dead at a high school birthday party in Juárez.

The systematic failure to bring killers to justice in a country where most murders remain unsolved only increases the incentive for criminals to target civilians, Hope added.

“If you happen to be chasing people down the street, you should become a priority target for authorities,” Hope said. “But that doesn’t happen. It sends a message [to criminals] that this is a good tactic.”

For many, the latest attacks have fueled an overwhelming sense of insecurity in places like the western state of Guanajuato, where rival gangs are vying for control of drug trafficking routes and black-market gasoline while blackmailing local businesses.

“There is no government here: here the narcos are the government,” said Rogelio Cornejo Díaz, 54, who runs a fruit and vegetable stand in Celaya, one of the cities in Guanajuato state affected by the rolling attacks late Tuesday and early Wednesday were hit hard. “If the President thinks everything is fine and quiet, at some point he should come here with his wife and children to see for himself.”

Violence in Juárez has eased somewhat over the past decade, but Thursday’s events demonstrated the enduring power of the criminal mafia — both sophisticated, transnational cartels and lower-level street and prison gangs.

Fighting each other, according to Mejía, were groups called Los Chapos — apparently linked to the Sinaloa cartel formerly run by Joaquín “El Chapo” Guzmán, now serving a life sentence in the United States — and a local prison gang called Los Mexicles.

Two prisoners were killed and at least 20 injured in a riot, Mejia said. It was unclear what sparked the dispute. But authorities said outside the prison, Mexicles members had been on the outskirts of the prison, killing at least nine people.

The victims included the four Mega Radio employees who were shot in the parking lot of a Caesars Pizza location. It was unclear whether Alán González, the announcer, and his three colleagues were accidental victims or were targeted in one of the most dangerous countries in the world for journalists. Also among the dead were two women who appeared to have died of smoke inhalation after the Rapiditos Bip Bop convenience store (part of the Oxxo chain) was attacked with a Molotov cocktail.

According to media reports, María del Refugio Ramírez, 54, was a longtime employee and Saira Janet de Santiago Castro, 18, was applying for a job at the store.

Local residents erected a shrine in front of the store on Friday.

Another man in Juárez was shot dead in his truck on Thursday, while another victim, also a man, was fatally shot in the street, authorities said.

The latest victim was a 12-year-old who was shot dead in a Circle K store, officials said. He died on Friday after doctors were unable to revive him.

Most shops and offices in the border town were closed on Friday as many feared a repeat of the violence. Police and army vehicles patrolled the streets.

The dramatic events of the past few days have triggered a new wave of criticism of President López Obrador’s controversial security strategy.

When running for office, López Obrador pledged to take a more holistic approach to fighting crime. He vowed to reject the militarized strategy of his predecessors and promote welfare programs for young people vulnerable to joining gangs.

But the homicide rate in Mexico has fallen only slightly since López Obrador took office in December 2018, and there is little evidence of a decline in the power of organized crime gangs.

“We are in a violent equilibrium that is self-sustaining and very little is changing in that government policy,” said Hope, the security analyst.

https://www.latimes.com/world-nation/story/2022-08-13/murder-spree-at-the-border-attacks-in-western-states-of-jalisco-and-guanajuato-stun-mexico Murders at the border and attacks in Jalisco and Guanajuato stun Mexico

The case for betting on the Ohio State Buckeyes in 2022

The SEC’s Climate Rule Won’t Hold Up in Court