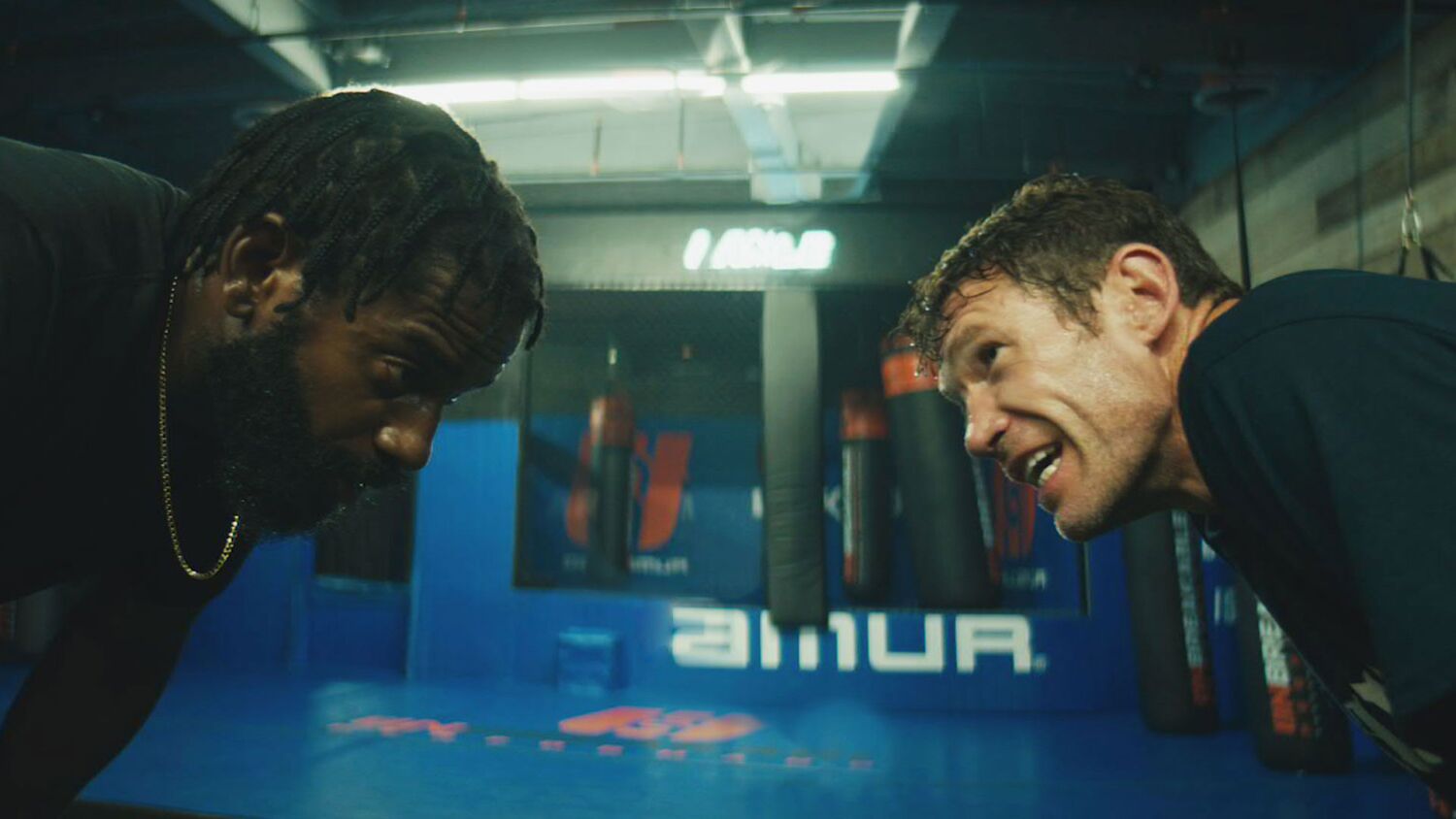 Nate Boyer and Jay Glazer have developed the kind of relationship where one friend can come home surprised that the other is running a full blown film production facility at their home without their knowledge.

“One day I walked into my house… He basically broke into my house and started filming. It was basically remodeled. There was a whole lot of people in there,'” Glazer said. “It wasn’t like a trifle [it was] a whole movie set.”

The Fox Sports National Football League reporter, analyst and insider had approved of the shooting but wasn’t quite sure when it would happen. Location is key to the film, titled MVP, because it is where Glazer and Boyer began developing the idea for the unique outreach program of the same name.

“Beyond him reluctantly opening his house – him did say we could do it — you see the Unbreakable Performance Center, Jay’s gym, in the film,” said Boyer, a former Green Beret and Seattle Seahawk who also got the spotlight for his friendship with quarterback Colin Kaepernick. It was Boyer who advised him to kneel during the national anthem in protest at police brutality.

“The reason we filmed [at the gym] – partly because Jay is generous and let us film there – but also because that’s where MVP became MVP.”

MVP in this case is referring to Merging Vets & Players, an organization that brings together military veterans and ex-athletes not only to train in the gym, but to talk about shared mentalities, experiences and issues that might arise from re-adapting – as Glazer puts it — “a less chaotic” life.

MVP was founded by Glazer and Boyer in 2015, and the film “MVP,” directed by and starring Boyer, hopes to draw attention to the struggles faced by both groups and the publicity presented by the organization.

MVP, the film, is inspired by actual events, is executive produced by Sylvester Stallone and stars Glazer, Mo McRae, Talia Jackson, Christina Ochoa and Dina Shihabi. It tells the story of a retired athlete (McRae) struggling with his new non-sports lifestyle and encounters a homeless ex-serviceman (Boyer) with post-traumatic stress disorder. They bond over shared mentalities and resolve to bring their worlds together.

In addition to tonight’s screening in 35 prime markets, the GNC Live Well Foundation will sponsor a benefit tour to the film screening featuring Boyer alongside local veterans and athletes throughout the 2022-23 NFL season. Despite the popularity of future streaming platforms, Boyer pushed for a theatrical release of the film because “it just comes off differently” when you watch it in a shared space.

We caught up with Boyer and a very busy Glazer ahead of the film’s release (it was the first week of the NFL season) to talk about the people the film portrays, the filmmaking experience for the novice filmmaker, and the true Purpose of the film film.

How was the film making process for both of you?

Nate Boyer: I do not know what I’m doing. If you have good people around you that you trust and you build a badass team, then people will find out. That’s how this thing happened. It was a great collaboration. We didn’t have any money, but it doesn’t look or feel like it because everyone just bought into it because of MVP’s mission. They know what it does and who it addresses and who it helps, so that was the biggest part of it.

I studied it as much as possible and produced some. Our [cinematographer], Logan Fulton, was the only department head who wasn’t a veteran. He’s amazing and he’s the one who realized that. All others were veterans [or former athletes].

I think a lot of times things get more complicated than they should be… If you have a good story and people who care, you’ll figure it out. The mission and the content and the people will speak louder than anything that can be written on paper anyway. That’s how it happened.

Jay, did you give Nate any tips on how to be in front of the camera?

glazier: I’m the worst guy to ask for acting advice. I did five seasons on Ballers and didn’t stick to a single script.

Boyer: But you’re in every season, brother. They wouldn’t have called you for season 2.

glazier: I did a scene in Bones and played an army veteran. I came in and didn’t know a single sentence I said. I just left the house. It was week 1 of the NFL season. I didn’t have time to read a script. However. Nate is a real actor. I usually play myself. Did quite well.

Boyer: He gave me a lot of tips and advice. Honestly, just watching him teaches me how to be in front of the camera. Especially with any kind of hosting stuff and his confidence… Trying to get a lot of information out of it in a short amount of time is a darn skill and he does it better than anyone.

Boyer: Mo McRae. This guy was so close to so many great things. He deserves every award he gets and I hope it leads to bigger and better things. He is not only talented but also very hardworking and takes care of everything. He showed up on set every day, even when he wasn’t working. I wouldn’t have made it without Mo. No doubt.

There are some big names in and around film. How did you get involved?

glazier: Wiz Khalifa trains with me at Unbreakable. All those other celebs fighting — Wiz can fight. Anyway, he made a song for us. I mean, of course he did because he’s part of the family.

Boyer: He has military in his family and has been supportive of MVP since the beginning. He saw us filming some stuff and said, “Let me know if there’s anything I can do to help.” I said, “Well, you can give me a song.” And he said, “I have you.” … He delivered it on Veterans Day [very shortly after].

glazier: About a day later.

Boyer: As far as some of the achieve [people supporting the movie], they are all close friends of Jay’s. Randy Couture, Tony Gonzalez, Jarrod Bunch. Apparently, [Michael] Strahan and Howie [Long]. When Jay and Tony and Randy tell these stories [onscreen in the movie]these are their stories – it’s not a script.

glazier: Oh yeah. I forgot some of it.

How does the film tie into the purpose of MVP, the organization?

glazier: The point of the film is really to look at MVP’s mission and reach out to the public and let people know that it’s okay to be vulnerable together. You bring a bunch of badasses together in a room, it’s okay to open up and lean into each other. It is not about me. It’s not about Nate. More than anything, this movie… The whole point of it is to help as many people as possible. Just try other ways.

Boyer: Part of that is outreach for the organization, but part of that was that we want the world to try and relate to people who are struggling with a transition like this. pain is pain To say, just because you served in the military and went to war, that your trauma is greater than everyone else’s isn’t fair.

There is a problem in our world today with people not recognizing or acknowledging the pain someone else is going through because they think it is lesser or different or not as valuable. I find that very unfair and harsh. You don’t know what someone has been through and treated on their journey. We all have our s—.

We pick our MVP, Coach of the Year, most GIFable moment, and more

The SEC Can’t Transform Itself Into a Climate-Change Enforcer

Jay Z Says Calling Him A ’Capitalist’ Is Like Using The N Word!