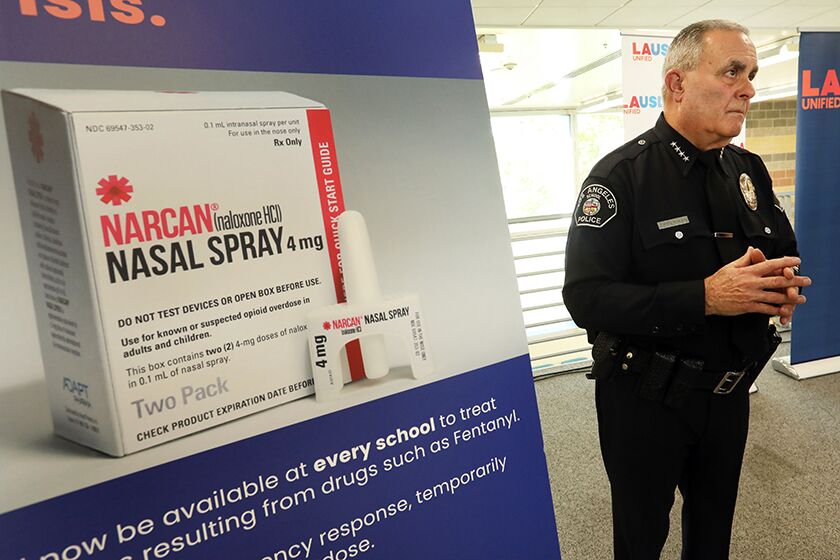 After a spate of fentanyl overdoses among students, California public schools could be required to provide on-campus Narcan — a nasal spray that can reverse the deadly effects of opioids.

The proposal is part of legislation introduced this week by both Democratic and Republican lawmakers aimed at improving information about the presence of fentanyl on K-12 campuses, which can be deadly and unknowingly consumed if it is hidden in other drugs like oxycodone and adderall.

The Los Angeles Police Department reported that at least seven teenagers have overdosed on pills that may contain fentanyl this year, including a 15-year-old girl who died in September.

In the opening week of the new legislature, Rep. Joe Patterson (R-Rocklin) introduced AB 19, which would require schools in California to have at least two doses of emergency naloxone, such as Narcan, on campus in the event of an overdose.

Patterson, a father of four who was sworn into the state legislature Monday, said the issue is non-partisan and he has not faced opposition to the legislation.

But the details of the proposal – including the unspecified cost – could be tricky. The legislation comes as California faces an estimated $25 billion budget deficit and state programs that offer narcan are already in high demand.

“I think the state will be obligated to pay for it in our schools if they oblige schools to do it,” Patterson said. “It won’t be the slightest cost, but it’s definitely a lot cheaper than the health effects associated with taking this drug and saving a life.”

Patterson said he would like to have Narcan on all of California’s 10,000+ K-12 campuses, but is open to starting only with middle and high schools if cost and supply constraints require it. While large districts in Los Angeles, Sacramento and Fresno already have the drugs stockpiled, not every district has the resources or motivation to do it themselves, Patterson said, and extensive statewide public education is needed.

The legislation was inspired by the death of his Rocklin neighbor Zachary Didier, who died in 2020 at the age of 17 after taking what he believed to be a Percocet pill he bought through Snapchat.

“I had no idea how kids got their hands on fentanyl — that they were poisoned — until tragedy struck,” Patterson said.

Sen. Dave Cortese (D-San Jose) also introduced SB 10 this week, which would require schools to include “opioid overdose prevention and treatment” as part of their annual safety plan, in addition to providing Narcan and education.

The bill is modeled after a Santa Clara County Office of Education program that would allow schools to work with public health officials to educate students about the signs of an opioid overdose — such as abnormal breathing — and to be wary of unfamiliar substances.

According to a spokesman for the Santa Clara County Office of Education, Narcan was used at least twice this school year to “resuscitate an unresponsive student.”

In Santa Clara County, fentanyl-related overdose deaths increased from 29 in 2019 to 135 in 2021, according to the Department of Education. Nationwide, fentanyl-related deaths accounted for more than 80% of all drug-related deaths among young people in 2021, according to the California Department of Education .

Santa Clara County and school districts that already supply Narcan do so at no cost with the help of state or local health departments, and school nurses and volunteers have been trained in administration.

Cortese said he was working on ideas to fund a statewide program that would not depend solely on general fund money from the state budget amid concerns about a looming recession. He pointed to Prop. 63, a millionaire tax that voters approved in 2004 to fund a range of mental health services, as one possibility.

Cortese’s bill also includes a “restorative justice” component that would discourage schools and local law enforcement from penalizing students who may need narcan, especially since accidental use is common.

“I don’t think traders and cartels should get away with it. It is appropriate for people to poison and kill people. But what about the kid who tried getting cocaine and ended up on fentanyl?” he said. “I think we are making a huge mistake in saying that anyone in possession of fentanyl will be subject to a felony or expelled from school. I don’t think that will get us where we want to be.”

Some schools started fentanyl awareness campaigns this year. In an email to parents in October, Sacramento City Unified announced that its schools would now have state-provided Narcan on campus. The district warned of “rainbow fentanyl,” which can come in a variety of bright colors and resemble “sidewalk chalk or candy.”

“Stress about not taking pills you haven’t been prescribed by a doctor,” the email advised parents.

Naloxone is a life-saving drug that reverses the effects of an opioid overdose and comes in the form of a small nasal spray advertised as easy to use. Projects across the country are looking for volunteers willing to learn how to manage and carry it.

According to a report published by the Journal of the American Medical Assn.

“While we’ve grappled with painful epidemics and a rise in illicit drug use before, there are elements of this crisis that are different. Teens often think they’re buying Adderall, OxyContin, Percocet, or Xanax pills, but drug dealers make these fake pills using the cheaper, stronger, and deadlier synthetic drug fentanyl,” Thurmond said in a letter to principals and superintendents.

https://www.latimes.com/california/story/2022-12-08/narcan-could-be-required-at-california-schools-after-spate-of-youth-fentanyl-overdoses Narcan could be required at California schools after youth fentanyl overdoses

Nick Fuentes Claps Back At Alex Jones: He Threw Me Under The Bus!!

Black Angelenos rejoice over the election of Karen Bass

The Little Nation That Could