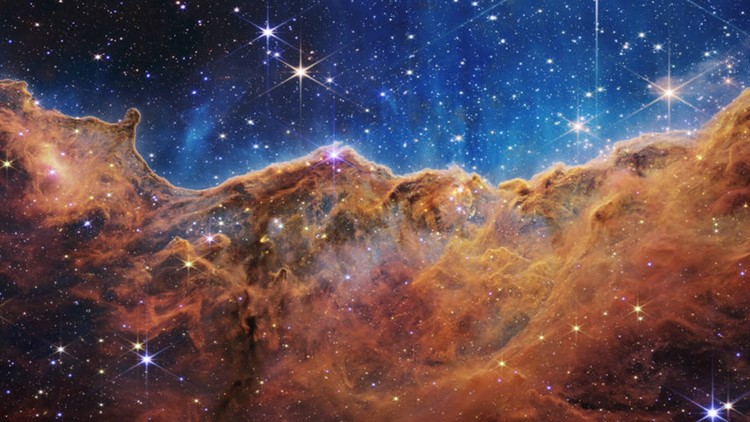 WASHINGTON — NASA on Tuesday revealed a new set of images from its new powerful space telescope, including a frothy blue and orange image of a dying star.

The first image from the $10 billion James Webb Space Telescope was released at the White House on Monday — a jumble of distant galaxies penetrating deeper into the cosmos than mankind has ever seen.

With one exception, the latest images showed parts of the Universe seen by other telescopes. But Webb’s sheer power, remote location from Earth, and use of the infrared light spectrum showed them in a new light.

Webb has captured the latest image of the planetary nebula informally known as the Southern Ring Nebula, located about 2,500 light-years away. It shows an expanding cloud of gas surrounding a dying star.

“The fainter star at the center of this scene has been emitting rings of gas and dust in all directions for thousands of years, and NASA’s James Webb Space Telescope has shown this star to be shrouded in dust for the first time,” NASA said on his website.

NASA said Webb captured the distinct signature of water along with evidence of clouds and haze in the atmosphere around WASP-96b. It is about the size of Saturn and 1,150 light-years away.

A hot, bloated gas planet, it is not a candidate for life elsewhere, but an important target for astronomers.

NASA revealed a new look at Stephan’s Quintet, a visual grouping of five galaxies in a cosmic dance. It was first seen 225 years ago in the constellation Pegasus.

“This giant mosaic is Webb’s largest image to date, covering about one-fifth the diameter of the moon. It contains over 150 million pixels and consists of nearly 1,000 separate image files,” NASA said.

Tuesday’s last image was a view of stars and “mountains” at the edge of a star-forming region called NGC 3324 in the Carina Nebula. The “Sternkinderstube” is about 7,600 light-years away.

“The cavernous area was excised from the nebula by intense ultraviolet radiation and stellar winds from extremely massive, hot, young stars centered in the bubble over the area shown in this image,” NASA’s website says .

“Each image is a new discovery, and each one will give humanity a glimpse of humanity that we’ve never seen before,” NASA Administrator Bill Nelson said Tuesday, raving about images that “depict the formation of stars and the… Devouring Black Holes”.

Webb’s use of the infrared light spectrum allows the telescope to see through cosmic dust and “see light from faraway lights from the corners of the universe,” he said.

RELATED: Another super moon is coming this week

“We have really changed the understanding of our universe,” said Director General of the European Space Agency Josef Aschbacher.

The European and Canadian space agencies joined NASA in building the powerful telescope.

Webb is considered the successor to the very successful but outdated Hubble Space Telescope. Hubble has looked back up to 13.4 billion years. It found the lightwave signature of an extremely bright galaxy in 2016. Astronomers measure how far back they look in light-years, where a light-year is 5.8 trillion miles.

Shootings on the Fourth of July