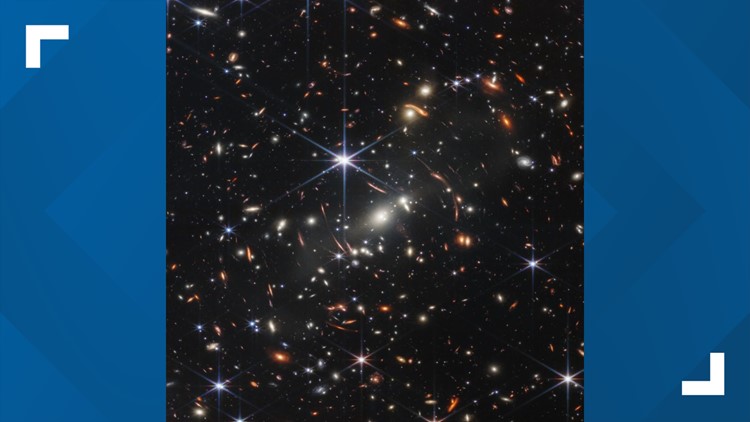 The first full-color image from NASA’s new Webb telescope shows “galaxies that were once invisible to us,” according to the space agency.

The first image from the $10 billion James Webb Space Telescope showed the furthest distance mankind has ever seen in time and distance, closer to the dawn of the universe and the edge of the cosmos. That image will be followed Tuesday by the release of four more galactic beauty shots from the telescope’s first outward looks.

NASA described what was released Monday as a “deep field” image.

The images, to be released on Tuesday, include a view of a giant gaseous planet outside our solar system, two images of a nebula where stars are born and die in spectacular beauty, and an update of a classic image of five closely spaced galaxies clustered around each other dance .

preview of @POTUS on July 11, it reveals galaxies that were once invisible to us. The complete set of @NASAWebbThe first full-color images and data from will be released on July 12: pic.twitter.com/zAr7YoFZ8C

The world’s largest and most powerful space telescope was shot down from French Guiana in South America last December. It reached its vantage point 1 million miles from Earth in January. Then began the lengthy process of aligning the mirrors, getting the infrared detectors cold enough to work, and calibrating the science instruments, all protected by a tennis court-sized umbrella to keep the telescope cool.

RELATED: NASA: Give us back our moondust and roaches

The plan is to use the telescope to look back far enough for scientists to catch a glimpse of the beginnings of the universe some 13.7 billion years ago, and to zoom in sharper on nearby cosmic objects, even our own solar system.

Webb is considered the successor to the very successful but outdated Hubble space telescope. Hubble has looked back up to 13.4 billion years. It found the lightwave signature of an extremely bright galaxy in 2016.

Thomas Zurbuchen, head of NASA’s science mission, said that with the new telescope, the cosmos is “revealing mysteries that have been there for many, many decades, centuries, millennia.”

“It’s not a picture. It’s a new worldview that you’re going to see,” he said at a recent media briefing.

Upon seeing the images, Zurbuchen said he became emotional, as did his peers: “It’s really hard not to see the universe in a new light and not just have a deeply personal moment.”

NASA is working with the European and Canadian space agencies on Webb.

Q&A: James Cameron on the return of ‘Avatar’ to movie theaters before ‘The Way of Water’ sequel