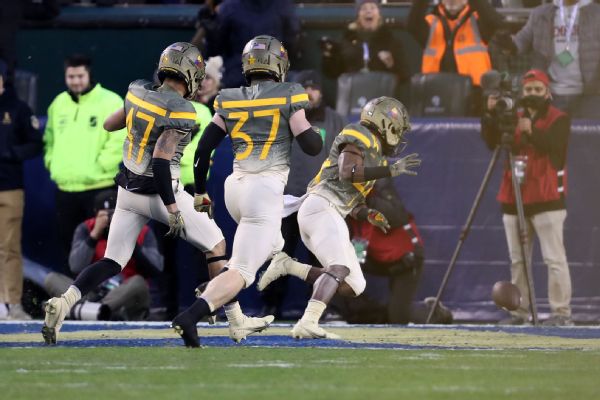 PHILADELPHIA — Navy’s Anton Hall Jr. lost a fumble at the goal line in second overtime, and that helped set up Quinn Maretzki’s game-winning 39-yard field goal as Army threw the Midshipmen in Saturday night’s first OT game at 20: 17 defeated in the 123 games of the rivalry series.

There wasn’t much offense throughout the game until Maretzki kicked a 37-yarder with 1:53 left to tie it at 10.

The NCAA introduced overtime in 1996, and the series has never had to do a bit more to decide one of the sport’s greatest rivalry games.

Army’s Markel Johnson rushed for 25 yards for a touchdown in the first game of overtime to take a 17-10 lead, and Navy passed to the Black Knights when Xavier Arline Maquel Haywood threw a 25-yard touchdown pass that made it to the 17-All made.

It was Navy’s first completion of the game and Arline had perhaps the cutest 1-of-1 for 25 yard play in Navy history. He also rushed for 102 yards.

Hall – who previously ran 77 yards for a TD – coughed up the ball as it tumbled toward the end zone and stood dejected after the game at Lincoln Financial Field as the fireworks went off.

Navy still leads the 62-54-7 series. However, the Black Knights have won five of their last seven encounters.

The teams passed for just 53 yards together.

One of Cade Ballard’s rare passing attempts for Army was a success when a pass interference call put the ball on the 28 with 4 minutes left on a drive that set up Maretzki’s field goal to equalize.