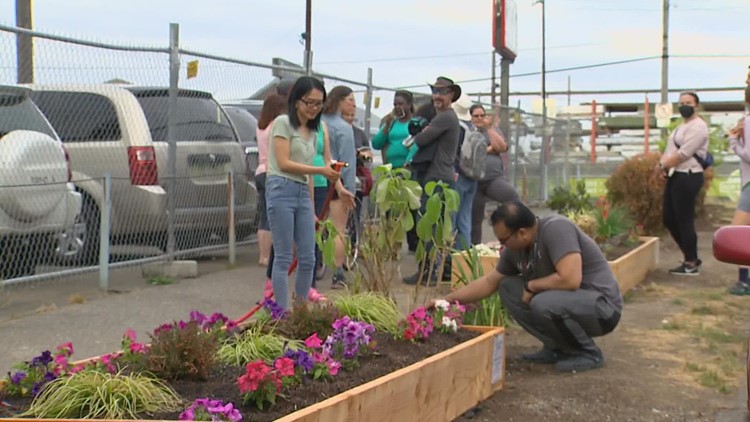 The block saw a transformation that happened in just a few hours. Crews came to clear the homeless camp, and almost immediately afterwards the neighbors planted a garden.

SEATTLE — After a man was shot dead at a homeless camp on Seattle’s Aurora Avenue, neighbors have taken their own approach to improving security on their block.

“We held an emergency meeting and talked about how [the city is] plans to clear the camp. Well what will happen when the crews leave? What can we do to make sure the neighborhood is safe? So we made a plan to put up a garden instead of the tents as soon as possible,” said neighbor Liza Javier.

About three weeks ago, neighbors said the camp along their block had grown to at least a few dozen tents and an estimated 50 people.

“When you drove through, people were scared,” Javier said. “People were absolutely terrified.”

Javier said the city made announcements that it was planning to clear the camp after one person was shot and killed. According to Seattle police, a 38-year-old man died on July 17 after being shot at the camp. Homicide detectives investigate the shooting.

Neighbors received a permit from the city to plant the garden after the camp was cleared.

The block saw a transformation that happened in just a few hours. Crews came in to clear the camp and almost immediately afterwards the neighbors planted the garden. Neighbors planted five flower boxes and about 20 shrubs.

Neighbors have been working to tend the garden for the past three weeks. Seruwu’s shop helps with the water supply.

“Because when [the plants] die, people will come back, but hopefully as they grow, they will have some respect,” Seruwu said.

As the garden grows, neighbors hope it will serve as a reminder that Seattle has a lot to do when it comes to the city’s homeless.

“Although we do gardening to protect our neighborhoods, the city really needs to introduce some serious policy changes to ensure everyone is safe across the city,” Javier said.

“This is better than what was there, but there is still more work to be done,” Seruwu said. “Maybe the city or other organizations can help because mental health is real. It just doesn’t stop at 96th and Aurora.”

Residents created a GoFundMe page for anyone interested in donating to the project.

Twitter will fight misinformation in US midterms with notification changes

In a coastal California town, three smokestacks are coming down