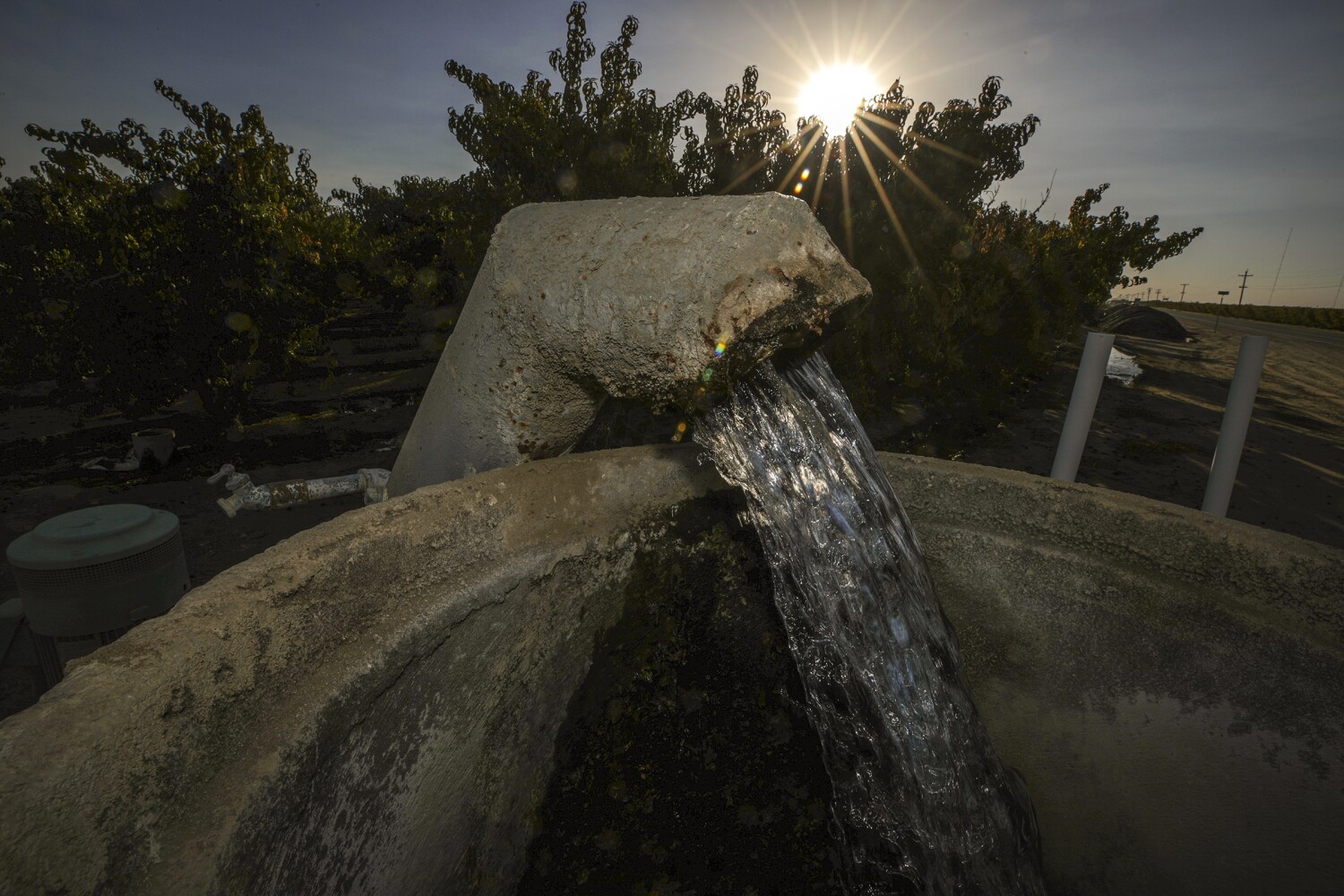 In farming areas across the Central Valley, a craze for well drilling has increased last year as growers turn to pumping more groundwater during times of drought, even as a drop in water levels knocks hundreds of homes away. The house nearby had a dry well.

Counties have continued to freely issue well permits in the years since California passed a landmark law, the Sustainable Groundwater Management Act of 2014, that aimed to address over-pumping over the past two years. next decade to conserve groundwater.

Some state legislators are now supporting a bill that they say would increase oversight and curb drilling frenzy by requiring local agencies to review permits for new wells. responsible for groundwater management.

“The agency responsible for trying to bring pumped groundwater into sustainable production should be able to consider new wells going into the very aquifer they are trying to monitor,” said Councilman Steve Bennett. Ventura), who introduced the bill.

Given how the system works, counties have signed off on, and farmland owners are “rushing to get their wells in” before the pumping limits go into effect, Bennett said.

“I think the rush to sink more wells will continue, if not accelerate, if we fail to do this,” Bennett said.

Bill, AB 2201, was approved by the Council’s Water, Parks and Wildlife Committee on April 26, and will next be passed before the Appropriations Committee.

The bill would require the so-called groundwater sustainability agency, established under the 2014 law, to review applications for well permits.

Governor Gavin Newsom in March issued a similar drought order barring local governments from issuing permits to drill wells if it “didn’t fit” with the area’s groundwater management plan. Newsom’s order has slowed the drilling of new wells in parts of the San Joaquin Valley.

But the order only provides temporary measures during times of drought, and the bill’s proponents argue that a similar permanent change is needed to protect vulnerable communities before more wells are lost. more exhausted.

The law would prohibit local governments from approving well permits unless there is written verification from a groundwater sustainability agency that the proposed well is “consistent” with its management plan. area. Groundwater basins that the state deems high or medium priority will be subject to the requirement.

The bill would require agencies to post notices of each well permit application online and allow public comment for 30 days. Exemptions will be made for domestic wells or wells that provide potable water.

The underlying problem, Bennett said, was that new wells were approved without an analysis of how the pumping would affect other wells in nearby communities.

“Disadvantaged communities need elected officials to stand up for them,” says Bennett.

Supporters at the committee meeting included Ruth Martinez, from the Ducor community in Tulare County.

Martinez said her community of about 600 people, mostly Latino farmers, has long suffered from nitrate contamination in their drinking water, which means they cannot safely use tap water. . In 2016, the community received a $1.8 million state grant and drilled a deeper well, nearly 2,000 feet deep, to provide clean water.

But last year, a new agricultural well was drilled across from their well, which she says threatens the community’s water supply.

“The county approved this new well without thinking about the impact on our community,” Martinez told lawmakers.

If the law were in place, the local groundwater authority would have notified the community and may have denied the permit application, Martinez said.

Martinez, a board member for the Ducor Community Service District, said residents are concerned about the water pumping.

“I’m getting calls and concerns from families about pressure drops and lack of water from our faucets,” says Martinez. “Our brand new water source is failing because the county didn’t protect us.”

Supporters of the bill include the group’s Community Water Center.

“It is imperative that we bridge and bridge the gap between decisions that enable land use and sustainable groundwater management,” said Kyle Jones, corporate policy director.

For successful groundwater management, he said, the state should prevent the proliferation of new agricultural wells in addition to drinking water wells.

The act was opposed by groups representing the agricultural industry.

Brenda Bass of the California Chamber of Commerce said the bill would “create a new licensing regime for groundwater wells that would negatively impact agricultural businesses” and food production.

A large portion of California’s water, about 80% of its supply diverted and pumped, is used for agriculture in a typical year, according to state figures. The Central Valley’s farmland produces almonds, pistachios, fruits and vegetables, and provides large dairy varieties.

Danny Merkley, director of water resources for the California Department of Farms, said he thinks the measure contradicts the “locally administered” approach that defined the 2014 groundwater law and is “premature.”

The new requirements under Newsom’s executive order should take some time to implement, Merkley said, “so we can identify the issues and correct it,” Merkley said, before considering permanent legislation.

The water supply on which farms have long lived, provided by canals from the Sacramento-San Joaquin River Delta, was cut during the drought. Growers have traditionally turned to more groundwater pumping during dry periods, and groundwater levels in the Central Valley have been declining for decades.

With climate change leading to hotter temperatures and increased droughts, the pressure on limited groundwater supplies continues to increase.

The 2014 law is expected to eventually introduce pumping limits that force growers to let some farmland dry out and go uncultivated.

NASA satellite measurements have documented the depletion of large amounts of water over the past two decades. So much water has been extracted from aquifers in the San Joaquin Valley that the land subsides as the clay collapses, a problem that has damaged canals and cracked roads.

In the Tulare Basin, the ground is sinking at a rate of about one foot per year.

According to statewide data, more than 3,900 home wells drying out have been reported since 2013, and the number of dry wells has increased significantly in the last year. The state has received reports of 975 home wells drying up in 2021, many in farming areas in the Central Valley.

An additional 162 dry wells have been reported so far this year.

The state’s Department of Water Resources recently reviewed plans submitted by local groundwater agencies and told agencies in farming areas in the San Joaquin Valley that their plans were “not yet available.” complete” and would require changes to address the widespread risk of multiple wells being depleted, as well as problems.

“We have a real problem in California with the water problem,” Bennett said. “We have a disconnect between those who are managing the basin for sustainable production and those who are concurrently approving the sinking of new wells.”

Bennett said he had been thinking about the need to address the issue for some time and he decided to introduce the bill after reading a Los Angeles Times article about the frenzied well drilling in the San Valley. Joaquin. Analysis by The Times shows that more than 6,200 agricultural wells have been drilled in the valley since the groundwater law was passed in 2014.

“I think that strikes a balance for me to say, ‘We’re going to do it this year,'” Bennett said.

He introduced the bill in January, and it was amended.

As the bill faces resistance from farming groups, Bennett said he expects a “huge battle” to get it through.

Fran Pavley, a former state senator who helped draft the 2014 law, said the bill was a much-needed update.

“Can you allow an unlimited number of new wells to be added?” Pavley, now director of environmental policy at USC Schwarzenegger Institute for State and Global Policy.

“There needs to be more oversight at the local level,” says Pavley. “We’re still in a race to the bottom.”