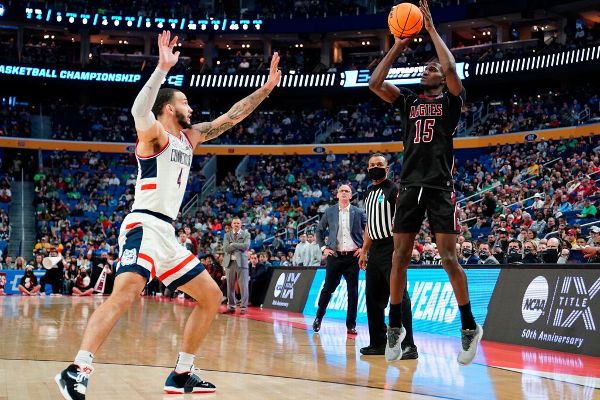 A New Mexico basketball player who was shot dead early Saturday was “lured” to the University of New Mexico campus by four New Mexico students before an altercation ensued, in which he shot and killed one of the students , according to a press release from the New Mexico state police on Sunday.

In the pre-dawn shooting that led to the postponement of the New Mexico State-New Mexico rivalry game Saturday in Albuquerque, Mike Peake, a junior forward, was shot and killed by Brandon Travis, a 19-year-old New Mexico student, the report said a source using ESPN. Confirmation of multiple reports. According to police, Peake then used a gun he owned to shoot Travis.

Travis was pronounced dead on the spot.

The three other attackers, a 17-year-old woman and two of Travis’ friends, all fled after the shooting, which took place at a New Mexico dorm.

“Through investigation, agents later learned that Travis conspired with a 17-year-old woman and two of Travis’s male friends, all UNM students, to lure the 21-year-old victim to the UNM campus and assault him.” of New Mexico said the state police statement.

The 17-year-old woman was arrested and charged with aggravated assault and conspiracy.

Peake, who averaged 9.0 PPG over two games, was taken to a local hospital.

Released by New Mexico police, Peake is a “victim” of the shooting.

A New Mexico state statement called the incident “heartbreaking” and said men’s basketball staff stayed in Albuquerque while the program continued to work out the tragic incident involving one of its players. A statement from the University of New Mexico said counseling services will be available to all students.

With Arte Moreno out, Angels need to spend big in free agency