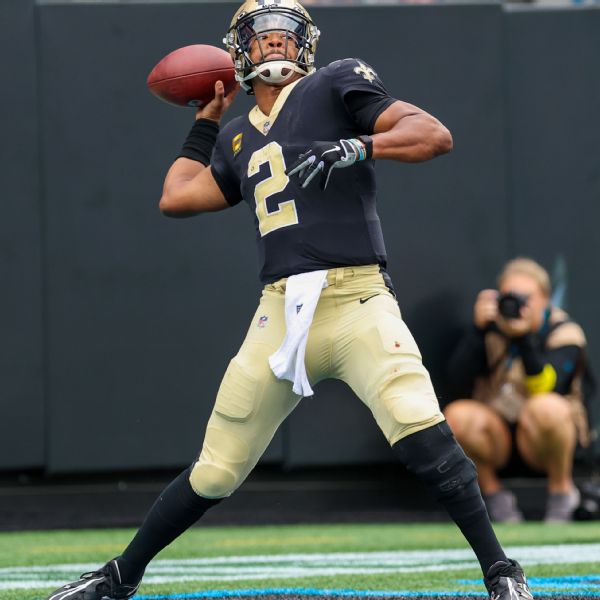 CHARLOTTE, NC — New Orleans Saints coach Dennis Allen said the team is not considering a quarterback change despite their offensive struggles and inconsistencies.

Quarterback Jameis Winston is struggling with a back injury he described as a “transversal fracture” to Fox Broadcast. Winston said he was in pain and wearing four layers of protection and a custom backplate against the Panthers.

He also said, according to Fox’s Sideline reporter, that “every time it’s pressing on his psoas muscle, putting weight on his back foot makes it really hard.”

“No, no. We all have to play better,” Allen said. “I don’t want to single anything out, obviously we have to make some corrections and do a better job as a group.”

The Saints didn’t score until the 12:31 mark in the fourth quarter. Running back Alvin Kamara lost a fumble in the first quarter and the Saints had a field goal blocked. Kicker Wil Lutz also missed a 48-yard field goal attempt.

“I think everyone looks for a place to blame in situations like this,” Allen said. “There are enough mistakes to get around, I don’t really want to go there. I’m confident with Jameis. Certainly we all have to get better and we will do that.”

Winston has been in the spotlight this season due to numerous injuries, recovering from a cruciate ligament rupture last year, spraining his ankle preseason and then injuring his back in Week 1. The ankle problem surfaced in the injury report this week.

“Sure, he’s a competitor, he’s a fighter, he’s tough,” Allen said. “Yeah, he’s struggling through some things. And that’s part of playing football.”

Winston has declined to publicly address his back injury, although he said it will heal and will not be something he will deal with all season.

He has maintained a positive public attitude, although at one point in Sunday’s game he appeared visibly upset on the touchline after glancing at the tablet with quarterbacks coach Ronald Curry and backup quarterback Andy Dalton.

Winston got up off the bench and was about to walk away before another assistant coach called him back. He went back to Curry but then walked away again and was seen talking to the offensive line shortly after.

“I tried to keep my composure. It was probably a reaction to something I saw on the screens or something,” Winston said. “I don’t think it escalated from there. Appearances can be very deceptive.”

Winston has completed 63.5% of his passes for 858 yards, 4 touchdowns and 5 interceptions this season. He was fired eleven times.

“This team, this organization has been here before, so we’re going to find a way to hold on and get a run,” Winston said. “Look, evaluate ourselves and find a way to get better.”