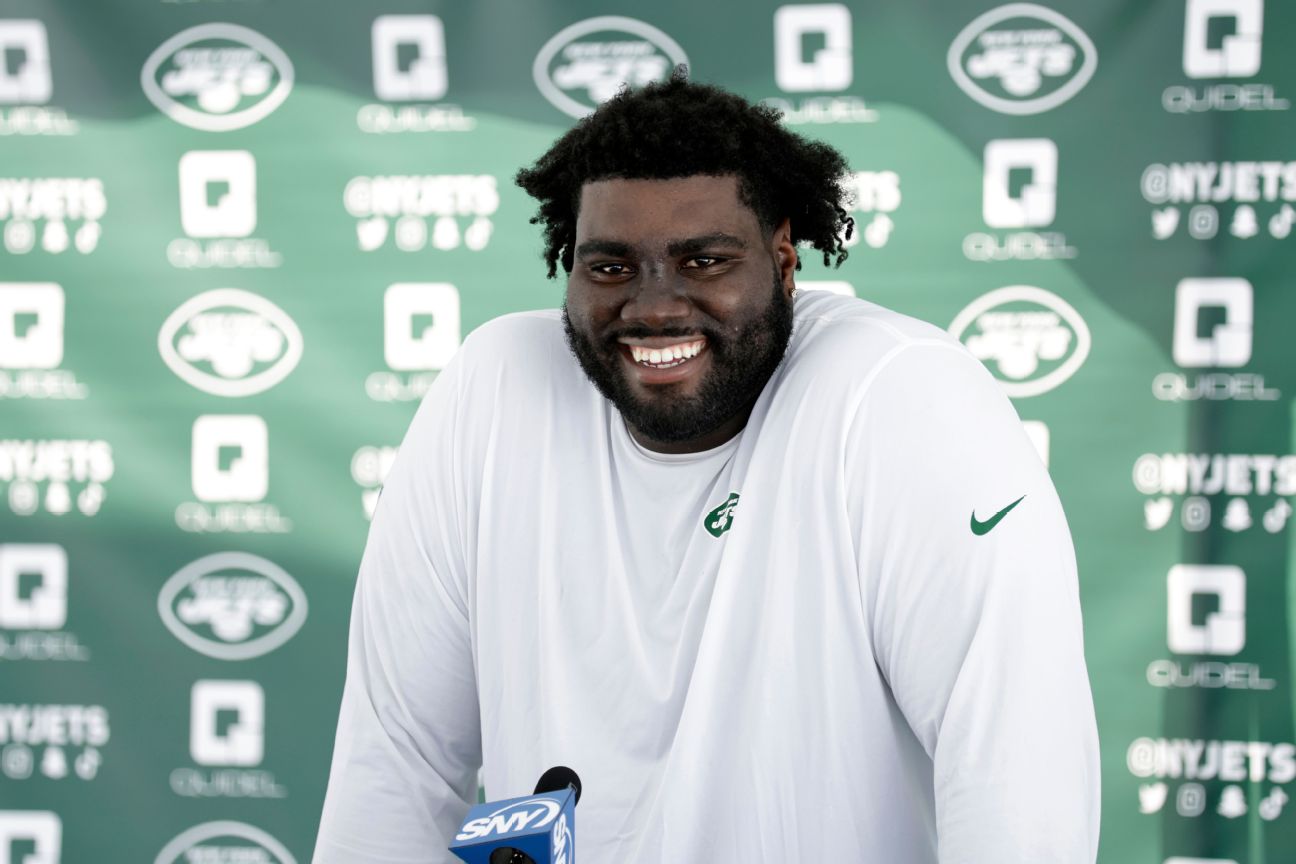 FLORHAM PARK, NJ — Mekhi Becton, offensive lineman for the New York Jets, returned to the field Wednesday for the first time in 11 months with a smaller waist and a new position.

Becton, drafted 11th overall in 2020 as a potential franchise left tackle, played right tackle in practice and will remain there for the remainder of the season, announced coach Robert Saleh.

The shake-up had been rumored since the end of last season, in large part because George Fant, who replaced the injured Becton in 2021, played so well at left tackle. Now it is official.

“George feels much more comfortable on the left side,” said Saleh after the first practice session. “He has the athleticism to play on the left, just like Becton. It was just a better combination.”

The Jets downplayed the importance of the move, but there’s no denying that left tackle is a more prestigious and higher-paying position than right tackle. Saleh said that “that doesn’t mean Mekhi’s left tackle days are over,” but says the team made the move so quickly without competition.

Becton took it in stride, claiming he wasn’t focused on prestige or money.

“I don’t really care if it’s left or right as long as I’m on the field,” said Becton, who sustained a season-ending knee injury in Week 1.

Becton’s status at minicamp was tarnished due to his conditioning. After skipping the voluntary portion of the offseason, he revealed himself to be overweight in June, raising concerns among coaches. Becton, who weighed up to 400 pounds during his injury rehab last season, is said to have been at minicamp in the 390s.

On Wednesday he was noticeably trimmer. The organization was thrilled with his weight loss.

“I’m not going to get too hung up on the weight,” Saleh said, “but he’s gotten into football shape. He’s a gifted athlete, a gifted man. I’m really excited about the direction he’s going.”

Becton didn’t reveal his current weight but said he’s achieved his goal. His personal nutritionist, Ann Claiborne, told ESPN that he’s “lost a lot of weight.” He stayed in New Jersey for most of the six-week break, working with the team’s coaches and conditioning staff.

Previously, Becton trained at a Dallas facility and chose to skip the offseason program because his girlfriend was pregnant with the couple’s first child.

If he can stay in shape and healthy — he’s only played eight full games in two seasons — the Jets’ offensive line has strong potential. Aside from Becton and Fant at the tackle positions, they have Laken Tomlinson and Alijah Vera-Tucker (2021 first-round picks) at guard and Connor McGovern at center.

Like Becton, Vera Tucker is learning a new position. As a rookie, he played left guard but switched to right flank to accommodate Tomlinson, an established left guard. Saleh said he’s not worried about two young players – Vera-Tucker and Becton – learning new pitches on the same side at the same time.

“Personally, I’m excited about that right side,” he said. “In my opinion we have two potential All-Pros.”

How a gentrifying Leimert Park is ending up in Black hands

How to stream Lollapalooza on Hulu this weekend