New York is following California’s example by requiring all new cars, pickups and SUVs sold in the state to be either electric vehicles or plug-in hybrids, Governor Kathy Hochul announced. To achieve this goal, 35 percent of new cars must be emission-free by 2026 and 60 percent by 2030. New school buses must also be emission-free by 2035. A public consultation will take place before the regulations are introduced.

Hochul ordered the state’s Environmental Protection Agency to create standards similar to those in California, phasing out the sale of fossil-fuel-only cars by 2035. These rules took effect last month and should reduce pollution from passenger cars by 25 percent by 2037, with 9.5 fewer internal combustion engine (ICE) only vehicles sold by 2035.

“We’ve had to wait for California to make a move because there are some federal requirements that California must prioritize — that’s the only time we’re going to give them priority,” the governor said in a news conference yesterday.

The state follows California’s actions for a reason. The Clean Air Act allows California to set its own pollution regulations, but other states are not allowed to do so. However, you can follow California as soon as it acts — so California must lead the way for any emissions regulations that individual states implement.

The governor also unveiled a $10 million Drive Clean rebate program. That gives residents a $2,000 rebate on the purchase of over 60 electric vehicles and plug-in hybrids, on top of the $7,500 federal tax refund. The state has so far spent $92 million on the program. The state also announced the installation of its 100th fast charger as part of the EVolve charging network.

https://www.engadget.com/ny-joins-ca-in-making-all-auto-sales-either-hybrid-or-ev-by-2035-075733173.html?src=rss New York joins California in aiming to make all auto sales hybrid or EV by 2035 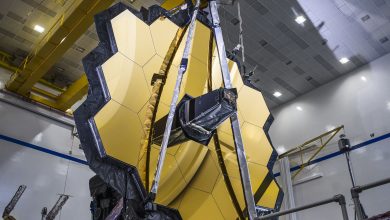 The Morning After: The 68GB SSD floating inside the James Webb Space Telescope

Tesla debuts an actual, mechanical prototype of its Optimus robot