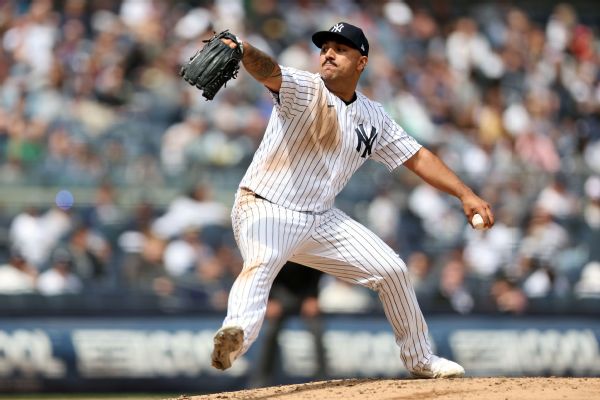 The New York Yankees on Thursday activated outfielder Giancarlo Stanton from the 10-day injured list and placed left-handed pitcher Nestor Cortes on the 15-day IL with a groin injury, it was announced.

Stanton has not played since July 23 due to left Achilles tendonitis. He completed live batting practice on Tuesday and his activation was expected ahead of the game against the Oakland Athletics.

Cortes has been one of baseball’s best pitchers this season, posting a 2.68 ERA in 131 innings and making his first All-Star Game earlier this season. He’s far surpassed his earlier career in innings, never exceeding 115 in the minor leagues. Cortes is second in the Yankee rotation in fWAR with 2.6 behind Gerrit Cole.

The Yankees enjoyed excellent health in the first half of the season but have struggled with injuries lately. Yankees manager Aaron Boone is now dependent on Cole, Domingo German, Frankie Montas and Jameson Taillon in his rotation.

A possible solution would be to bring Clarke Schmidt into the rotation. Schmidt was mostly in the bullpen for the Yankees that season, but was stretched out for pitch-starter innings when he was briefly sent to the minor league.

The Yankees also expect Luis Severino (lat. stretch) to return to the rotation from the injured list by mid-September. In the bullpen on Wednesday, Zack Britton made his first minor league appearance since undergoing surgery from Tommy John in September, and closer Clay Holmes (back) could rejoin the team from the IL in the near future.

Weissert has played in 40 games for the Scranton/Wilkes-Barre RailRiders this season and has a 1.76 ERA with 18 saves and 67 strikeouts in 46 innings.

Back to School 2022: New Jersey sales tax holiday could help you save big this weekend