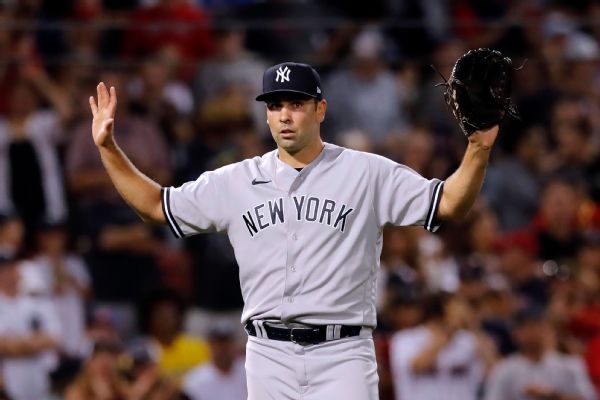 OAKLAND, Calif. — When New York Yankees helper Lou Trivino was patted on the shoulder while warming up in the bullpen, it was to alert him that he was wearing the wrong jersey: the No. 50, the Jameson Taillon instead of his own owned 56.

Trivino had removed his sweatshirt to throw pitches at the Coliseum on a chilly Friday night and the problem became clear. He began warming up in case he had to replace Wandy Peralta, who gave up an RBI singles to pinch bat Dermis García but ended the 2-hour 50-minute game for his third save as New York defeated the Oakland Athletics defeated 3-1. 2.

“I don’t know. It happens,” Trivino said. “…I was warming up. I wasn’t even paying attention.”

A bat boy scurried out with the correct jersey, and Trivino made a quick switch.

Trivino, who was traded to New York alongside Frankie Montas of the A’s as of the reporting date, said he wasn’t sure who told him about the mix-up. He laughed it all off, saying, “It wasn’t the first time, it probably won’t be the last.”

So had he done it before? “Oh yes, who hasn’t?” he rolled over his head and agreed that next time he could try on Aaron Judge’s No. 99 for some fun.

Trivino had joked that he wanted some attention since he wasn’t playing. He did everything right.

What's a Pell Grant? How to check if you received one