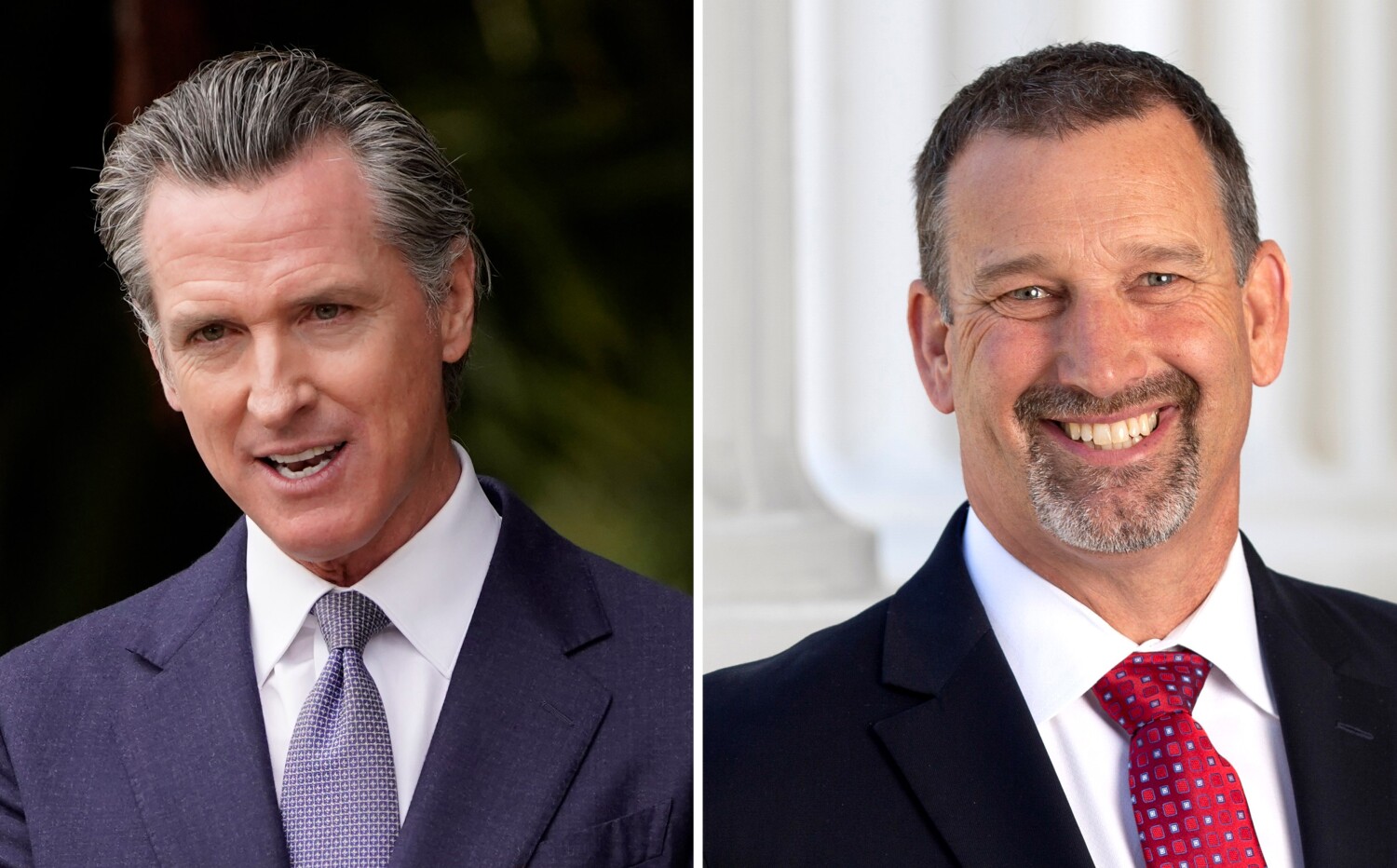 Nearly a year after crushing a Republican-led recall attempt, Gov. Gavin Newsom is leading his GOP challenger in the 2022 gubernatorial race by more than 2-to-1, despite a majority of voters expressing dissatisfaction with where California is heading as one new poll shows .

Newsom has the support of 52% of registered voters, compared to 25% who favor Republican Sen. Brian Dahle, a Northern California conservative who remains a political unknown among most voters, according to the latest UC Berkeley Institute of Governmental Studies poll. co-sponsored by the Los Angeles Times.

Just 19% of voters said they were undecided, making it unlikely the Republican will have scope to close the gap before the November election.

More than half of California voters — 53% — support Newsom’s job as governor, according to the poll. That’s a slight increase from February and his strongest approval rating since the summer of 2020, during his government’s first coronavirus response.

Newsom has strong support from voters who say they are particularly concerned about the environment and fighting climate change, the COVID-19 pandemic and defending abortion rights — issues the governor has placed at the heart of his re-election campaign .

Mark DiCamillo, who leads the Berkeley poll, said Newsom’s approval numbers are impressive because the poll showed 52% of registered voters said California was going in the wrong direction, versus 40% who said the opposite.

While this is a clear sign of dissatisfaction, the number that says the state is going in the wrong direction is far lower than it was in 2010, at the height of the Great Recession, when 80% of voters thought so. And Californians are more positive about the state than the nation: the poll found that 74% said the US is on the wrong track.

As these national numbers suggest, California voters aren’t necessarily blaming the governor for the issues that concern them most — including soaring inflation, the surge in gas prices earlier this summer and the overall financial distress, DiCamillo said.

Newsom also benefited from this year’s $101.4 billion budget surplus, which allowed the state to send more money to schools, expand health care services and $17 billion in aid payments to families, seniors, low-income Californians and provide small businesses that are feeling the financial hardship.

“Every politician’s political judgments are viewed through the prism of how things are going. Luckily for Newsom, the state is rich in money,” DiCamillo said. “Nevertheless, voters are not really positive about the economy and their own financial situation.”

However, Dahle’s ability to use these issues against Newsom is limited. While Dahle is by far the Republican favorite and holding his own against Newsom in the conservative, northernmost parts of California, he trails the governor in almost every other voting category, the poll shows.

Democrats make up nearly half of the state’s registered voters, and Newsom overwhelmingly leads among them. He also leads Dahle, 47% versus 20%, among impartial voters, a bloc about the size of Republicans. Newsom is a leader in nearly every region of the state, among men and women and among every major racial and ethnic group.

Dahle remains little known to California voters, with nearly 6 in 10 saying they don’t know enough about him to have an opinion. More than 90% of voters are aware of Newsom, with 53% having a positive opinion and 39% having a negative opinion, according to the poll.

Newsom also enjoys a massive campaign fundraising advantage, with $24 million in cash compared to Dahle’s $300,000, according to recent campaign finance reports filed with the state. This reflects not only Newsom’s political strength in California, but also the advantages and power of the incumbent.

His decisive defeat in the September recall campaign, in which he branded the Republican candidates who were trying to unseat him as former President Trump’s far-right anti-vaccinationists, virtually cemented Newsom’s re-election in 2022, Nalder said.

This victory freed Newsom and allowed him to strengthen his role as the voice for progressives across the country. He has criticized the timidity of national Democratic leaders and attacked Republican governors. Ron DeSantis of Florida and Greg Abbott of Texas for banning or restricting access to abortion, defaming LGBTQ Americans and undermining electoral integrity.

Newsom’s first general election television spot aired in Florida, not California. In the July 4 television spot, Newsom contrasted politics in both states, showed a picture of Trump and DeSantis, and criticized Republican leaders for “banning books, making voting harder, restricting classroom speech, and even women and doctors.” to criminalize”.

“There are certainly arguments that being seen as a combative Democrat is in his favor and his national profile. A liberal with a left hook is what people on the Democratic side are starving for right now,” Nalder said. “That’s sort of the dream candidate for many Democrats given Biden’s moderation. Biden is so cautious and that frustrates a lot of people in his party.”

Newsom’s recent splashes on the national scene have sparked speculation about a possible presidential bid in 2024, though he has repeatedly denied it. While the White House isn’t anytime soon, Newsom’s attacks on GOP governors will only cement his support among California Democrats, Nalder said.

Of course, the back-and-forth between California and Florida governors also increases DeSantis’ appeal among Republicans, as well as his standing among potential GOP presidential candidates.

“Taking DeSantis down a notch is going to be hugely popular in California, especially among Democrats,” Nalder said. “California has been a punching bag for the right for decades, so that helps DeSantis as well.”

The UC Berkeley Institute of Governmental Studies poll polled 9,254 registered California voters Aug. 9-15. The survey was conducted online in English and Spanish. The estimated total sampling error is plus or minus 2 percentage points.