As one of the most famous football players in the world, it’s understandable why fans want to know more about Neymar’s girlfriend and who he’s dating now.

Neymar, whose full name is Neymar da Silva Santos Júnior, made his professional football debut at 17 with Santos Futebol Clube Paris Saint-Germain Football Club for a reported €222 million, making him one of the most expensive footballers of all time. In an interview with SporTV in 2015, Neymar spoke about his dream of getting married and settling down. “I want to meet a woman, get married and have children. It’s something I always talk about with my friends, I have this dream of getting married in a church, going out with my friends and having my kids by my side every day,” he said.

Neymar, who shares a son named Davi with his ex-girlfriend Carolina Dantas also spoke about how becoming a parent is driving him to have even more children. “I have a child who lives far away and I know how difficult that is. The dream of wanting to be a father with a family continues,” he said. Neymar also told the outlet how difficult it is being apart from his son as he gets older. “It’s hard being so far away from Davi,” he said. “It’s difficult being so far away from my son, it makes me very nostalgic. I speak to him on his mother’s cell phone almost every day. He comes here every month and a half or two.”

Who is Neymar with now? Read on what we know about Neymar’s girlfriends past and present and if he is in a relationship now. 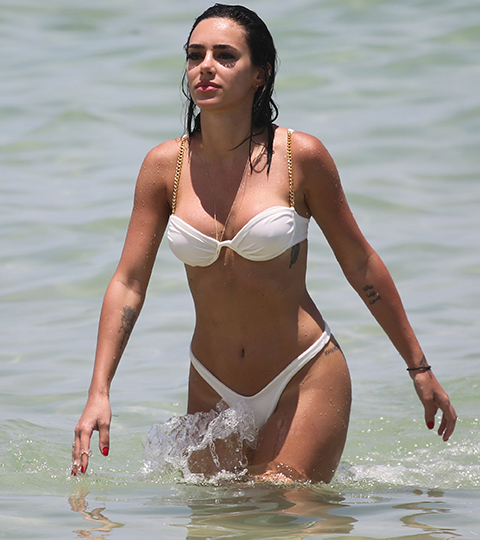 Neymar and Brazilian model Bruna Biancardi began dating in 2021 but only confirmed their relationship in January 2022 when they announced their engagement on Instagram. The two split in August 2022, a month after Bruna was spotted without her engagement ring. Bruna confirmed the separation in an Instagram story at the time. “I’ve always been myself and you know that, but since you keep asking me, I want to make it clear that I’ve been in no relationship — for a while — and there has been no cheating. Don’t believe everything you see. I have a lot of love for him and his family! Please stop calling my name. Thank you very much!” Bruna wrote at the time.

Bruna’s post was in response to a report from Extra Online at the time that Neymar had cheated on Bruna at a party, leading to her ending their relationship. “A few days later she discovered that he had been at this party with a girl and decided to end it on the spot,” Extra Online reported at the time. “Bruna packed her things and left as soon as the sun came up.”

Neymar and model Natalia Barulich met in February 2018 when Natalia’s then-boyfriend, Colombian singer Maluma, performed at Neymar’s 26th birthday party. Natalia and Maluma separated in October 2019 after two years together. “I love Juan Luis (Maluma) very much, but right now we need to make time for ourselves and our careers so that we can continue to grow as artists and individuals,” Natalia said in a statement at the time. In an interview with the Mexican show windowing After their split, Natalia denied that her friendship with Neymar was the reason for her breakup with Maluma. “He’s a great friend and I don’t know why the media thinks we’re together just because we did a photoshoot, I adore him, he’s a great person, he’s a great friend, he’s always been one great guy and he’s a great person in my life,” she said. She also responded to rumors that Maluma’s song ‘Hawai’ was written about her and how she left him for Neymar. “I didn’t believe any of it. I don’t know if he dedicated it to me, I heard he did but I also heard he didn’t. The truth is that I don’t care, that’s in the past and I want to keep it there, it was an experience in my life that I don’t regret. But it’s time to move on because we’ve been apart for a year,” she said.

In “Hawai” Maluma sings about a former girlfriend who tried to make him jealous. “The picture you posted saying he’s your heaven / babe i know you well i know it was uploaded to make me jealous / i won’t tell you who but someone told me that he saw you cry,” he sings. from a translation by Distractify. The music video for “Hawai” also saw a woman who played Maluma’s girlfriend call their relationship “toxic,” which fans believe was a reference to Natalia discussing her relationship with Maluma in a previous interview on Danny Morrel’s ” Evolve” also described as “poisonous”. podcast.

In February 2020, Natalia confirmed her relationship with Neymar on his 28th birthday in Paris, France with a photo of them on her Instagram story. “Everyone knows how extraordinarily talented you are, but if only they could see how real and beautiful you are in your heart. You have all my respect and honor baby,” she captioned the picture. Neymar and Natalia dated for several months before splitting in late 2020. In a response to an Instagram follower in September 2021, Natalia responded to a fan’s question about whether she misses one of her ex-boyfriends. “No. I will always have love for the few that I have had a relationship with,” she said. “But these are all just stories in my life book now. I am so grateful for every experience that shaped me into the woman.” who I am now. Now we’re moving on and growing and knowing exactly what I want for my life and what I don’t want.” Natalia also described her year as a “roller coaster ride” to another fan. Neymar and Natalie split in 2021.

Neymar and actress Bruna Marquezine met at the Rio de Janeiro carnival in 2012 and started dating soon after. (Bruna hails from Duque de Caixas, Rio de Janeiro, Brazil, which is about 400 kilometers from Neymar’s family in Mogi das Cruzes, São Paulo, according to The Sun.) Bruna and Neymar split in 2013 but got back together after FIFA World Cup 2014. Bruna and Neymar split and reunited in 2016 before finally splitting in 2018. In an interview with Vogue at the time, Bruna confirmed that Neymar was the one who ended the relationship. She also denied that the split had anything to do with their different political views. According to The Sun, fans believed Neymar voted for Brazil’s right-wing President Jair Bolsonaro, while Bruna was a vocal supporter of the opposition Labor Party. “We’re done,” she said. “It was his decision. I will ask that this topic not be extended as I don’t usually talk about my personal life. I have a lot of respect and affection for him and for everything we’ve been through together. I just want to clarify this point because we live in a critical and dangerous time, a time with a lot of hate and no, the breakup had nothing to do with it [politics].”

In March 2019, Neymar defended Bruna after deleting her Instagram account for bullying. “I don’t get it, I’m a fan of her as an actress and as a woman. We didn’t work for some reason and nobody has to get that… You have to respect that [Bruna] as an actress,” Neymar tweeted at the time, according to The Sun. “Keep calm @BruMarquezine.” He continued, “You’re just trying to talk bullshit about talented people and you’ve had too much. I will always take care of you and respect you and I will defend you because I know who you are.”

Neymar and UFC Octagon girl Jhenny Andrade were first linked in 2015 after they were spotted at a New Year’s Eve party. Jhenny – who was born in Ribeirao Preto, Brazil and was a writer for Brazilian men’s magazine VIP – also posted a photo of her and Neymar to her Instagram at the time with the caption, “Barbie and Ken gorgeous.” Jhenny and Neymar dated a few months together before splitting in 2015. During their relationship, Jhenny also took part in two of Neymar’s matches, including one against Real Betis Balompié where Neymar slipped and missed a penalty, according to The Sun.

Carolina Dantas was Neymar’s first love. They dated from 2010 to 2011 when he was still a new player at Santos FC. Months after their split, Neymar and Carolina welcomed their first child together, a son Davi Lucca, in August 2011. Despite their split, Neymar and Carolina remain friends and have an amicable co-parenting relationship for Davi. In August 2021, Neymar and Carolina were photographed vacationing with friends on a yacht in Ibiza. In an interview with Britain’s GQ in 2021, Neymar revealed he would like to have at least two more children after Davi. “I’m almost 30 and have a good career, but on a personal level I want to have two more kids to give my son Davi some brothers,” he said. He also noted his career goals, which include winning a World Cup title. “I want to be world champion. It’s always been the biggest dream of my career. But I also want to win every title with PSG – the Champions League, the Coupe de France,” he said. When asked which football players he would like to play with, Neymar replied: “I would choose Christiano Ronaldo – because I have already played with great players like Messi and Mbappe. But I haven’t played alongside Ronaldo yet.”

You can read more about Neymar in his 2001 memoir. Neymar My Story: Conversations with my father. The autobiography, which includes interviews between Neymar and his father Neymar Sr., takes readers through the Brazilian footballer’s legendary sporting career, from when he was scouted by Santos FC (the same club that made Pelé’s career possible) at the age of 11 to his professional debut at the age of 17. The book also explains why Neymar would not be the exceptional football player he is today without his father, Neymar Sr., who nurtured, developed and guided him throughout his career. Neymar My story is described as a “beautiful and touching story” about a father and son and what it was like raising one of the greatest football players in history.

https://stylecaster.com/neymar-girlfriend/ Neymar Girlfriend 2022: Who Is He Dating Now After Bruna Biancardi?

Who wins when Hollywood woos Meghan and Harry, Hillary Clinton?