As one of the best footballers in the world, it only makes sense that Neymar’s net worth would reflect his status in the game. Today, the professional footballer is one of the highest paid athletes in the world by salary – but how much is Neymar worth exactly?

Neymar, whose full name is Neymar da Silva Santos Junior, was born on February 5, 1992 in Mogi das Cruzes, Brazil. His father, Neymar Santos Sr., is a former soccer player himself who quickly became his son’s mentor after witnessing his burgeoning potential for the sport. From a young age, Neymar Jr. was coached in football. At the age of 11, his family moved to So Vicente, Brazil to join the Portuguesa Santista youth team. In 2003 they moved again to Santos, Brazil where he became a member of Santos FC to be coached with the Santos youth program. This is where Neymar started his career, following in the footsteps of footballers like Pepe, Pelé and Robinho, who all started at Santos.

At the age of 14, Neymar traveled to Spain for auditions with Real Madrid’s youth team, at a time when Cristiano Ronaldo, Zinedine Zidane, David Beckham, Roberto Carlos and Robinho were all playing for Real Madrid. But in the end he didn’t sign with the team as Neymar’s father decided to keep his son in Brazil to give the young prodigy a normal childhood before his career took him around the world. Instead, Neymar made his professional debut at Santos FC in 2009. He quickly became one of the team’s most valuable players, eventually helping them win the 2011 Copa Libertadores. The victory marked their first victory since 1963 when Brazilian star Pelé played for the club. 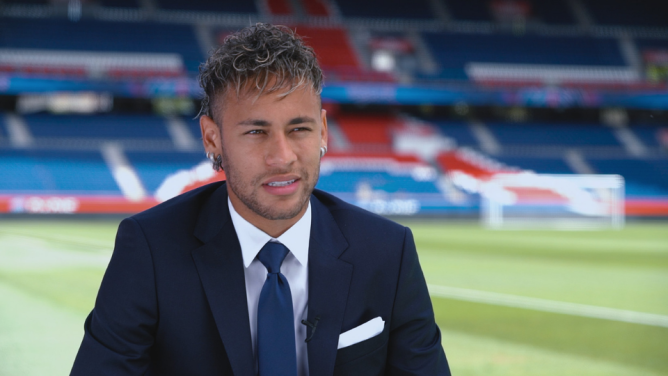 During his time at Santos, Neymar was twice named South American Footballer of the Year, named World Soccer Young Player of the Year and won the FIFA Puskas Award for Goal of the Year. Despite being courted by some of Europe’s top teams, Neymar eventually decided to stay at Santos FC as the team offered him a higher salary to keep him until 2013. This year he joined Barcelona FC. While playing for Barcelona, ​​Neymar achieved a lot and became a member of the famous attacking trio MSN, which included Lionel Messi, Luis Suárez and himself. The three finished the 2014-2015 season with a record-breaking combined total of 122 goals – a record they still hold to this day.

In 2017, Neymar joined French team Paris Saint-Germain. His contract – which you can read more about below – made him the most expensive player in history at the time. In Paris, Neymar has won three league titles, three Coupe de France and two Coupe de la Ligue. With Neymar at their side, the team also clinched a domestic treble in 2017-2018 and a domestic treble in 2019-2020, leading PSG to their first Champions League final at the end of the season.

Neymar’s professional football career also includes achievements as a member of the Brazil national team. He was first selected for the senior Brazil team when he was just 18, playing his first game in a game against the United States. Since then he has represented Brazil in a number of international events, including the 2011 South American Youth Championship, the 2013 Confederations Cup, three Copa America tournaments in 2011, 2015 and 2019, and two Summer Olympics in 2012 and 2016, among others with two World Cups in 2014 and 2018. So what is Neymar’s net worth? Read on what we know about Neymar’s Net Worth and Earnings.

What is Neymar’s salary?

As of 2022, Neymar’s salary is estimated to be $78 million a year, according to Celebrity Net Worth. This is an increase of $2 million from 2021, when Forbes reported that Neymar’s salary was $76 million. The professional footballer signed his current contract with Paris Saint-Germain in May 2021, which extends his tenure with the team until the summer of 2025. According to Forbes, the contract is filled with potential performance bonuses, including a “massive” pay rise if he leads PSG to a Champions League win.

Neymar’s contract with PSG began in 2017 when he joined from FC Barcelona for a whopping $263 million. The transfer, which was fully paid for by the French club prior to his signing, remains the most expensive transfer in football history. Signing his first contract, Neymar earned a record-breaking $1.02 million a week, bringing the total annual income from the team alone to around $53 million.

Of course, Neymar’s salary also consists of some extremely lucrative endorsement deals. According to Forbes, the star player earns a whopping $19 million through sponsorships and endorsements with brands such as Epic Games, Flutter Entertainment, Puma, Qatar Airways, Red Bull and Triller, among others.

Looking at Neymar’s salary today, it becomes clear that the Brazilian has come a long way since his days at Santos FC. His first big deal with Santos cost a comparatively meager $1.7 million — but for a then 17-year-old, there was nothing to complain about. A year later, the team offered Neymar a binding $20 million contract. He turned down the offer in favor of a more flexible $4 million deal with the team that would allow him to further consider his prospects beyond Brazil. This decision paid off: in 2013, Neymar signed for Barcelona for an alleged $119 million and earned him a salary of around $15 million at the time.

What is Neymar’s net worth?

Now that we know his salary, only one question remains: what is Neymar’s net worth? According to Celebrity Net Worth, Neymar’s net worth is $200 million as of 2022. Neymar’s net worth has been amassed thanks to his impressive salaries and deals over the years, including his $119 million contract signing with FC Barcelona in 2013, his record-breaking $263 million transfer to Paris Saint-Germain and his many endorsements. Collectively, these earnings allow Neymar’s salary to total an estimated $78 million as of 2022. According to Forbes, in 2022 Neymar earned $55 million on the football field and $32 million off the field.

In an interview with Redbull in 2022, Neymar recalled his very first goal as a professional footballer. “My memory of my first goal for the national team is kneeling down and thanking God for everything that had happened in my life. It all happened super fast and it was one of the most wonderful things that has happened in my life… a goal in my first game for the team,” he said.

Neymar also spoke about what it’s like to play with Lionel Messi at Paris Saint-Germain and his other favorite teammates. “I’m very happy, very satisfied to have Messi at Paris Saint-Germain. Not only is he a football idol, a top player and a genius, he is also my friend. And when you have friends by your side, your everyday life is easier and calmer. We hope to make history together, like we did in Barcelona,” he said. When asked which teammates excite him the most, Neymar replied: “I would say two: [Kylian] Mbappe and [Marco] Verratti. Mbappé is very fast, young, a great player. And the other one that surprised me was Verratti. I knew he was good, but I didn’t know that he was as good as he is, as awesome as he is. Today I can say that alongside Xavi and Iniesta he is one of the best midfielders I have ever played with.”

Neymar also named Pelé, another Brazilian football legend, as his idol. “Pélé means football. Ever since I understood what football is, I’ve always heard the name Pelé. If someone dribbled past three players on the street, on the field or at school and scored, someone would always say, “You scored like Pelé,” he said. “Or if someone at school acted up and thought they were the best, we would say, ‘Do you think you’re Pele?’ I’ve heard these kinds of expressions since I was a kid. For me, Pelé is the king of football, Brazil’s greatest idol. I have a lot of respect for him and for everything he has done for our football and our country. If Brazil is world famous for football today, it’s because of him. We are truly blessed that Pelé was born in Brazil.”

Neymar also told the brand at the time what it would be like to win the Champions League with Paris Saint-Germain. “It would be incredible. I came to Paris Saint-Germain with the aim of lifting the Champions League trophy. I’ve been trying to do this since 2017,” he said. “Today our team has some newcomers, players with a lot of quality have been brought in and we are still adapting to each other. As soon as we get used to each other we will be very strong together and I don’t think I need to say anything individually. It would be incredible, wonderful to do what we did in Barcelona with Paris Saint-Germain.”

You can read more about Neymar in his 2001 memoir. Neymar: My story: Conversations with my father. The autobiography, which includes interviews between Neymar and his father Neymar Sr., takes readers through the Brazilian footballer’s legendary sporting career – from the time he left Santos FC (the same club that gave Pelé his start) at the age of 11 ) until he made his professional debut at age 17. The book also explains why Neymar would not be the exceptional football player he is today without his father, Neymar Sr., who nurtured, developed and guided him throughout his career. Neymar My story is described as a “beautiful and touching story” between a father and a son and shows what it was like to raise one of the greatest football players in history.

Neymar: The perfect mess can be streamed on Netflix.

https://stylecaster.com/neymar-net-worth/ Neymar Net Worth 2022: How Much He Makes From Paris Saint-Germain

Why legal weed is failing in this California county

Spider-Man 2 PS5 release date and everything we know